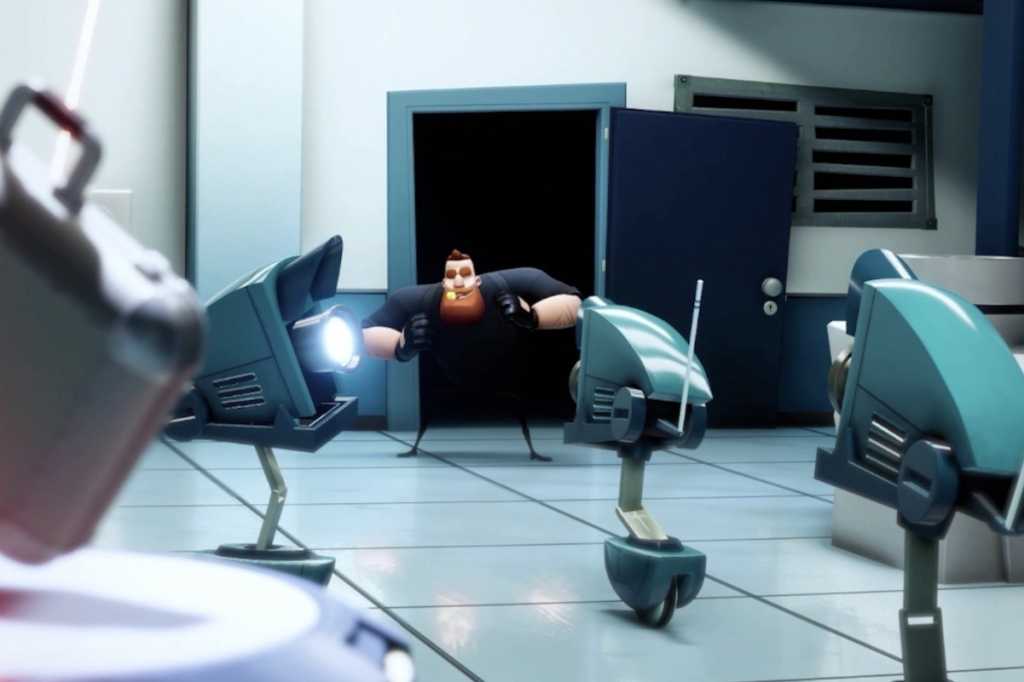 Secret Oops! wants us to believe that Charles is the world’s dumbest spy, and yes, he kind of looks the part. He sounds a lot like Overwatch’s Reinhardt (sans armor), and you can usually find him dizzy and confused at the start of each level, sometimes even face-down in liquids of questionable origin.

But hear me out: Maybe Chuck just has a world of faith in his coworkers. In this multiplayer augmented reality game, that includes you and up to three other players. You’re “the guys in the van,” so to speak—the Simon Pegg character in Mission: Impossible or Penny in Inspector Gadget—and you’re guiding him through a 3D digital model that reminds me a lot of the tabletop holograms in The Expanse. Charles tiptoes through every facility he infiltrates, fully confident that you’ll use your “Spymatic 3000” to open the sealed doors and turn off the laser walls and security lights that threaten to thwart him from the nabbing the goods. Should he run into one of those laser walls, the screen blasts you with an accusatory OOPS! That “oops” isn’t for Charles, silly; it’s on you for failing him.

And reader, I failed so many times. Secret Oops is definitely designed as a multiplayer game, preferably with you and three other players standing around a table, the better to press the big buttons for disabling the switches for those laser doors. It doesn’t demand Overcooked’s level of cooperation, but there’s enough going on that rounds could just as easily end with finger-pointing as in back-slapping.

I would have loved to see it. Unfortunately, there’s only local co-op, and anyone who wants to play with you needs to have an Apple Arcade account and their own devices. I tried booting up the game on both my iPad and iPhone and letting a friend use one of the device, but no go.

If you’re anything like me, you’ll end up saying a lot worse things besides “oops” if you attempt to do this on your own in augmented reality. For one thing, Secret Oops requires a lot of room to play, as there’s no way to seize the board once you plop it down on a table. (That was one of the things I loved about the Smash Tanks!, a battler that made my list of the best AR games for iOS.) You’ll also need a table that’s perfectly sized so you can move around to all four sides in a hurry. They’re harder to find than I would have figured. I tried playing it in the big conference room here at Macworld, and discovered it was too big. And almost every other promising table was pushed against a wall. Even a picnic table might be too big.

This isn’t bad design—it’s just a reminder that Secret Oops! was unabashedly designed for multiplayer. It’s probably as well-designed for single-player attempts as it could be. Laser walls and such stay down so long as you keep hold your finger down, and they’ll stay down even if you move your finger to another spot without lifting it. This allows you to see the context and move to the next spot to prepare for the next obstacle. Each level tells you to plan your moves before tapping Charles to begin, and I’ve learned that isn’t just a reference to scoping out the obstacles. It also refers to figuring out how you’ll move around the table. It’s a bit like learning the steps to a dance, and it’s almost as intensive. Dancing, though, is almost always more fun with someone else, and that’s the case here.

I can’t help but admire that Secret Oops! has no shame about being an AR game. Augmented reality tends to come off as a gimmick in games because they usually play just fine when you switch off AR. It’s almost as if the developers are hedging their bets, afraid to dunk themselves in the technology’s full potential.

In Secret Oops!, though, the non-AR mode seems to exist to make us appreciate the strength of its AR. Instead of moving around the table, you can swipe on the screen to move around, and you can even play it with a controller. But it’s laughably hard. You need to move around the table and aim the thumbtacks over the controls for the lights and walls. I shudder to think of anyone playing this on Apple TV and not understanding that it was made with touch controls and AR in mind.

Still, this is exactly the kind of bold thinking we need to see more of if Apple expects the rest of the world to buy into its repeatedly stated vision of AR changing our lives. It’s a good thing it’s on Apple Arcade, too, as Apple’s service may give it a degree of visibility that AR games tend to miss out on because they’re buried in the back pages of the App Store. It even fits well with Apple’s understated wish for us to see AR as a social activity, as almost every keynote presentation with the technology features at least two people walking around with iPads. This is the first game that’s made me seriously entertain that vision. It’s also the first AR game that feels like it’d be fun to recommend at a party.

But it also reminds me of just how awkward AR remains on the iPad and iPhone. Secret Oops! may be one of the best AR-centric games I’ve played, but it’s still awkward to jump around a table with a $1,000 tablet. Bounding around that table, all I could think about was how much more fun this would be with AR glasses. Supposedly those are still on the way. Maybe Secret Oops! is a harbinger of their arrival, and maybe it’ll be one of the first games Apple uses to show off the technology when the glasses or headset makes its debut.

And Apple’s plans for augmented reality remain a secret I’d like to know more about. If that’s what Charles is hunting for, I’d be happy to spend a few more hours jumping around a table to help him. It’s frustrating to go alone, though—care to join me?