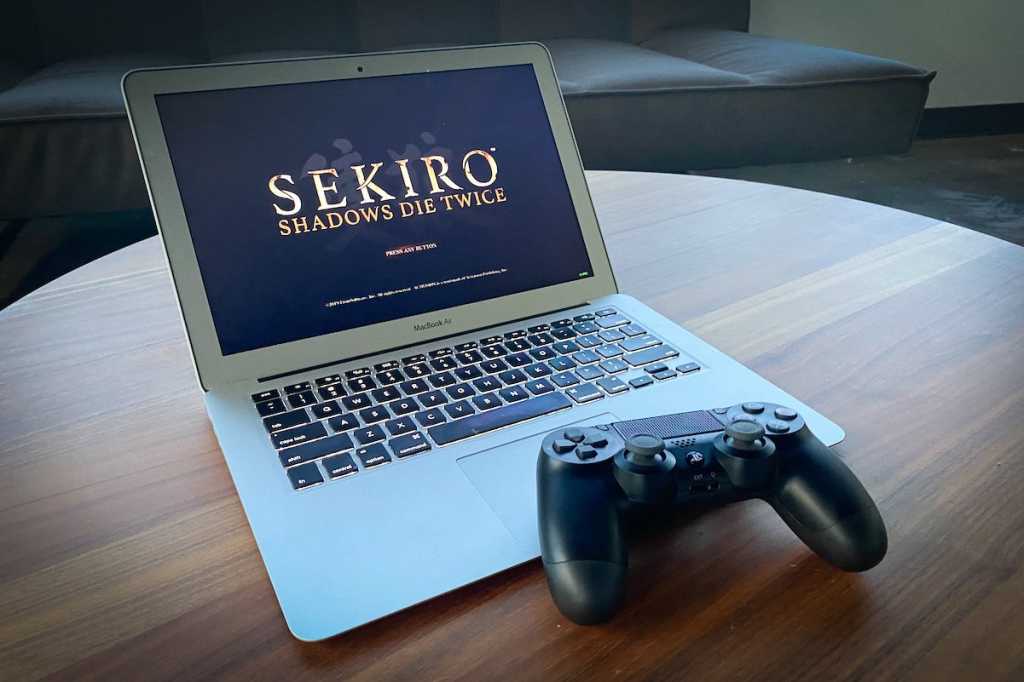 Here’s something I never thought I’d say: I’m playing Blizzard’s Overwatch on macOS Catalina on a 13-inch MacBook Air from 2012. I’ve got the graphics cranked up as high as they can go, and I’m still getting 60 frames per second. And even though I’m playing on a relic from the halcyon days when you could find USB-A ports on a Mac, my team is winning—and I think it’s safe to say it’s largely because of me.

All of this isn’t happening because Mac gaming suddenly went from “sucky” to “super” overnight, and it sure as heck isn’t because Blizzard finally released a Mac port of its popular team shooter. Instead, I’m playing with a new Founder’s Edition account of Nvidia’s GeForce Now game streaming service, which has at last made its way to the public after a couple of years in beta.

With only a few reservations, I love it. You’re never going to catch me saying it’s good enough to replace a gaming PC, but I’d say it’s about as close to that experience as you can get on a Mac, especially on one as old as this one. And I think it’s time to face the music: This is probably what the future of Mac gaming looks like. This is as good as it’s going to get. (Our sister site, PCWorld, has a news article on GeForce Now you can also check out.)

Up in the cloud

Before I get too far ahead of myself, here’s an explainer. Nvidia GeForce Now is a cloud game streaming service like Google’s Stadia, but one that’s infinitely friendlier to consumers. (Sadly, Stadia didn’t live up to the promise.) You don’t have to rebuy some games you probably already own on a PC, and it works with a number of storefronts you may already have accounts with, such as Steam, the Epic Games Store, and Blizzard’s Battle.net. You don’t even have to worry about your Mac being able to run these games, as Nvidia itself keeps them updated and powers all of them with its own celebrated graphics cards—which, as a reminder, haven’t been supported on Macs for years.

The only things you really need are an Nvidia account and an internet connection that’s capable of reaching at least 15Mbps. Unfortunately, in the Appleverse, GeForce Now is only available on the Mac. It may seem perfect for iOS and the Apple TV, but when I asked, an Nvidia representative said the company had “nothing to announce.” It’s not hard to believe that Apple itself may cause trouble in that regard, especially after the fiasco surrounding Valve’s Steam Link app in 2018 and 2019.

You don’t even have to pay for GeForce Now if you don’t want to, as the free version lets you use the service to play your games for up to an hour at a time, though you can hop right back into another session if you’re booted off. If you want to bump up to six hours with “priority” access to Nvidia’s servers (as well as Nvidia’s RTX ON technology for ray tracing), you’ll have to pay just $4.99 a month for the Founder’s Edition account. That’s the same price as an Apple Arcade subscription, less than Google Stadia’s $10 per month, and the kind of thing many of us might forget about. In this case, though, you’ll also get a 90-day free trial (which leads me to believe the subscription price might go up later).

It’ll be hard for some players to forget about that six-hour session limit. Most normal people probably aren’t going to hit that. But I, er, admit I occasionally go over six hours without logging out when I’m playing Final Fantasy XIV on the weekends, so it could happen. Like with the free service, however, you can sign back in if you bump into the six-hour session limit, so you aren’t barred from playing more once you hit that mark.

Also a minor bummer: GeForce Now doesn’t support all games on Steam, Epic, and similar storefronts, but it does support quite a few. They’re the games that are popular enough to warrant maintaining with such a setup. Aside from around 30 popular free-to-play games like Fortnite, many of the remaining 1,000 or so tend to be on the old side. I wasn’t able to find brand-new popular hits like Star Wars Jedi: Fallen Order, Control, or the PC port of Red Dead Redemption 2, but I was able to find many of my favorites like Sekiro: Shadows Die Twice, PlayerUnknown’s Battlegrounds, and, of course, Overwatch. Considering that none of those games have come to the Mac, I call that a big win.

For the best performance, though, I highly suggest playing on a wired connection. If Google’s Stadia has any real advantage over GeForce Now, it’s that it runs well on something as simple as my browser, even on my garbage home Wi-Fi connection. GeForce Now always seems to struggle on Wi-Fi—and Nvidia itself suggests that you play with at least a 5GHz network.

Our office Wi-Fi at Macworld isn’t bad: We get 181Mbps for downloads and 201Mbps for uploads, which is far more than the 30Mbps Nvidia recommends for 1080p60 streaming. But when I tried to play The Witcher 3 in the middle of office hours, the textures sometimes got so muddy that screenshots could pass for discarded canvases from the impressionist artist Monet.

On an ethernet connection, though? Zero problems. In fact, the Overwatch clip at the top of this story was captured while I was hooked up to ethernet. I didn’t get to try it out, but Nvidia suggests this kind of performance is possible even on a 2008 MacBook running at least macOS Yosemite.

Even considering those potential stumbling blocks, it’s not a stretch to say Nvidia has changed the game. Heck, it lets us play the game, which Apple itself isn’t showing much interest in doing. With this one service, Nvidia manages to knock out many of the usual frustrations.

Now, for instance, there’s no need to buy a ridiculously expensive 16-inch MacBook Pro in the hopes that maybe—maybe —you can play a modern blockbuster game on macOS at 30 fps on middling settings. Provided your internet connection is strong enough, there’s no question you can run it with GeForce Now. For that matter, you don’t have to sacrifice a huge chunk of the often small MacBook hard drives so you can partition them for Boot Camp.

Nor is there any reason to pour around $1,000 into an external GPU and graphics card just so you can play something as graphically uncomplicated as World of Warcraft on your MacBook with the settings at maximum.

And it’s about time. If you haven’t heard, Mac gaming has been in a particularly sorry spot as of late. Most developers seem to have stopped caring, and it’s hard to blame them. Blizzard, which famously used to simultaneously release PC and Mac games at once, has yet to release a Mac port of Overwatch five years after its release. The Elder Scrolls V: Skyrim has been ported so much that it’s a game industry joke, but it still hasn’t made its way to Mac.

You can get an idea of why developer might not care from last week’s report that developer Psyonix was dropping Mac and Linux support for its popular Rocket League. As Ars Technica reported, non-Windows players make up a measly 0.3 percent of players. With a player count that low, it’s no wonder that Psyonix is offering refunds for players on those systems.

Here at Macworld, I stopped writing our monthly roundup of the top Mac games because finding good games every month became as hard as finding a Steve Jobs wallpaper on a Google Pixel. An embarrassing number of the games on my list of the best Mac games still haven’t been upgraded to support the transition from 32-bit to 64-bit in macOS Catalina, even in the case of simple games like Undertale.

And Macs always struggle to run games anyway, despite Apple’s efforts to woo developers into using its Metal API. As YouTuber Quinn Nelson of Snazzy Labs showed last month, even the $6,000 starting model of the new Mac Pro struggled to run some games at 30 fps. (Performance did get better when Nelson dropped in an AMD 5700XT.) Even my own 13-inch MacBook Pro struggles to run some Apple Arcade games. Nobody buys a Mac expecting it to be a monster gaming rig, but this state of affairs is ridiculous.

GeForce Now doesn’t eliminate all of the problems of Mac gaming. In fact, it introduces some new ones. You might finally be able to run The Witcher 3, but you’re still in danger of eating your data plan. (Fortunately, GeForce Now has a “Data Saver” mode that will only eat through 4GB of data per hour rather than the 10GB you can expect with the “Balanced” setting.) And I’m not entirely convinced GeForce Now will stay stable once the floodgates open today.

But let’s repeat some things worth repeating. You can now play graphically demanding PC games you already own on your old glowy-logo MacBook without having to partition your drive or do something ridiculous like buying an eGPU. And you can do this for $4.99 a month!

You can win a Shot Caller commendation in Overwatch and then Command-Tab over to try to find some AirPods Pro in stock in Safari. It’s the best Mac gaming has looked in ages, and unless Microsoft really manages to wow us with its own Project xCloud, I don’t think it’s going to look much better than this for a while.

Sure, we’ve heard some sketchy rumors about a “ Gaming Mac”, but I believe those about as much as I’d believe reports that Steve Jobs is still alive and teaching yoga in Fresno. The fact remains that the Mac gaming library is pitifully small, especially for blockbuster games. Who’s going to crank out a mountain of cash just so they can play Rise of the Tomb Raider the way Feral Interactive intended us to? I doubt it’ll be affordable, and I doubt it’ll be worth the wait.

Speaking of waiting, I’d get used to it. Right now, one of the big drawbacks of relying on GeForce Now as your main gaming service on the Mac is that you’ll probably have to wait a while for games to become available. It might be years before we see them, especially in this age of long exclusivity agreements on storefronts like the Epic Game Store.

Think of it this way: We Mac gamers are used to waiting. It took years for Rise of the Tomb Raider to come to Mac. Games like Overwatch never came, and we came to expect that it wouldn’t, as we did with so many other titles.

But now, at least, we can be confident that there’s a real chance.