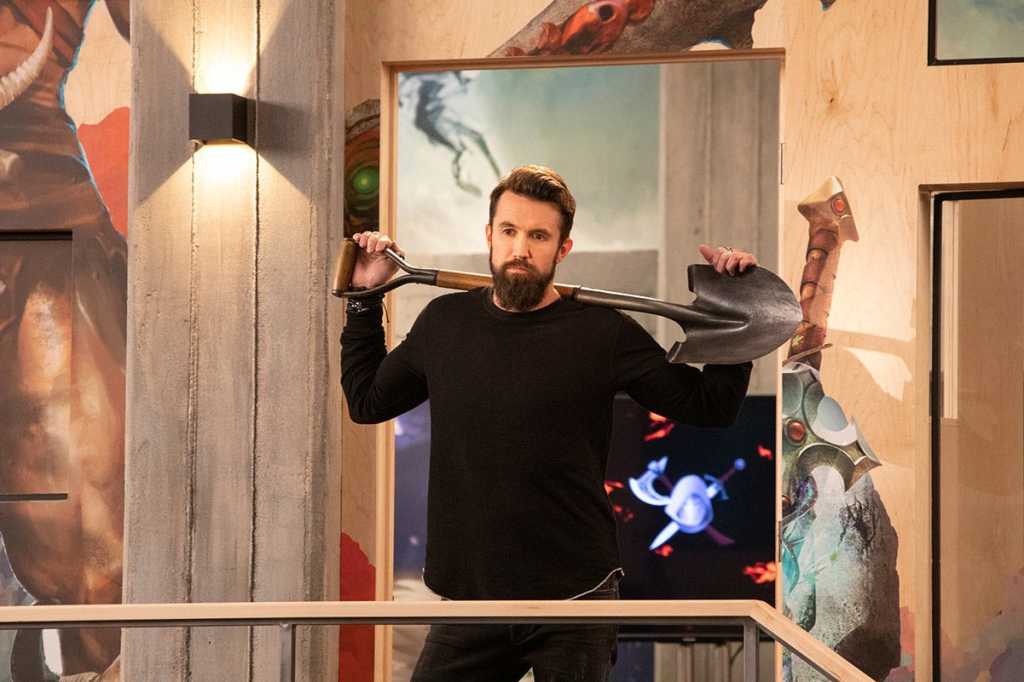 I’m so happy Mythic Quest: Raven’s Banquet exists. So much about it sounds implausible. For one, it’s a workplace comedy set at a game studio that makes an MMORPG in the vein of World of Warcraft, and the miserable little misanthropes within are busy preparing for the launch of their first expansion. Games, for all the talk about how they bring in more money than movies these days, almost never get this kind of mainstream attention on TV. For another, it’s made by executive producers Rob McElhenney, Charlie Day, David Hornsby, and Megan Ganz, best known for their work with It’s Always Sunny in Philadelphia.

And here’s the chaser: All of this was made possible by none other than Apple, which normally plays so poorly with the mainstream game industry that I recently said a third-party streaming service delivered the best gaming experience we’re probably going to see on a Mac for years. (It’s worth noting, though, that few genres cater so strongly to Mac players like the MMORPG.) Somehow, with such a baffling mix of ingredients, there’s plenty to feast on at this banquet. I’m already craving seconds.

It works in part because it gives the setting its due. In less capable hands, the actual game developerment might have faded into the background and the studio might have been indistinguishable from an ad agency or a Hollywood studio. Mythic Quest, though, digs deep into gaming culture, and into topics you’ll probably only recognize if you frequent the big gaming media sites like IGN and Kotaku. The main characters feel like people you might actually meet in a game studio, unlike the sad stereotypes you tend to find in other shows.

Even some of the problems seem real, in part because they are. One of the best things about Mythic Quest is that many plot elements have counterparts in real-world gaming stories from the last decade. Early on, we see lead engineer Poppy Li (Charlotte Nicdao) trying to leave her own mark on Mythic Quest in spite of the overbearing vision of creative director Ian Grimm (Rob McElhenney). She proposes introducing a shovel that will let players alter the landscape, which sounds a heck of a lot like the terrain manipulation in the abandoned game EverQuest Next. When the gang isolates some players onto their own server, Mythic Quest recalls EverQuest 2’s introduction of a “ prison server” back in 2015.

And the list goes on, allowing Mythic Quest to inform a wider audience about some of the unique problems associated with game development. There’s the shocking paucity of women developers, for instance, which is best explored through Nicdao’s character. Elsewhere, we see the team struggling to deal with the rise of white supremacists (while also trying not to lose them as a source of income). From there, Mythic Quest goes on to tackle loot boxes and “crunch,” the period shortly before a game’s launch when developers get pressured to pull in over 100 hours of work per week so a game can ship on time. And then there’s my favorite: Mythic Quest shows how developers are no longer all that interested in impressing the traditional press (ahem)—instead, the team spends a lot of time trying to appease a 14-year-old streamer going by the name of “Pootie Shoe” (and his 10 million followers). Ah, the march of civilization goes on.

It’s a show about games that was made by people who clearly love games and have some knowledge about what goes on in these studios. That’s not to say you should expect 100 percent accuracy—witness the laughably tiny two-person QA team for a game that’s bigger than WoW, to cite but one example—but it reveals great affection for its setting. Mythic Quest itself almost even looks like a real MMORPG, in part because Apple enlisted developer Ubisoft to repurpose some of its assets from games like For Honor and the Assassin’s Creed series.

That love especially reveals itself in the fifth episode, which backs away from the current-day shenanigans and sends us 15 years into the past. It’s almost like a different show. There’s a couple who falls in love, makes a game, and then sees their initial vision whittled away by cruel circumstance. Narratively, the episode’s importance doesn’t become clear until the season’s almost done. From a viewer’s perspective, it’s yet another of the many ways Mythic Quest attempts to show why people willingly put themselves through the little hells of game development.

Mythic Quest is all about letting us see the people behind the pixels. It’s a reminder that the people at a game studio aren’t only dudes wearing sport coats over graphic tees—instead, sometimes they might be old, washed-up science fiction writers like C.W. Longbottom (F. Murray Abraham). Mythic Quest does an especially good job with secondary characters, such as poor Sue (Caitlin McGee), a community manager who stayed stashed away in a basement far from the rest of the team.

The laughs come quick and often in Mythic Quest, and I suppose we should be thankful. Being familiar with many of the stories that provided fodder for the plot lines that made it in, I know of many others that could have led Mythic Quest into storylines that outdone The Morning Show in bleakness. And to its credit, Apple TV+’s new show doesn’t ignore these shadowy corners of the game industry, but it only calls our attention to them with brief mentions of “doxxing” and similar ills.

Someday, with more seasons, Mythic Quest might match Silicon Valley in stature. As it is now, it falls into that weirdly predictable Apple TV+ pattern of not really taking off until the third episode, which may be why Apple decided to drop all episodes at once rather than following a weekly schedule.

But that’s fine—we’re better equipped to see it improve as the season goes on. And considering that games, unlike movies series, have a good chance of getting better with sequels and MMORPG expansions, it’d be appropriate to expect a second season that’s even better than the first. I’m ready to put in my preorder.