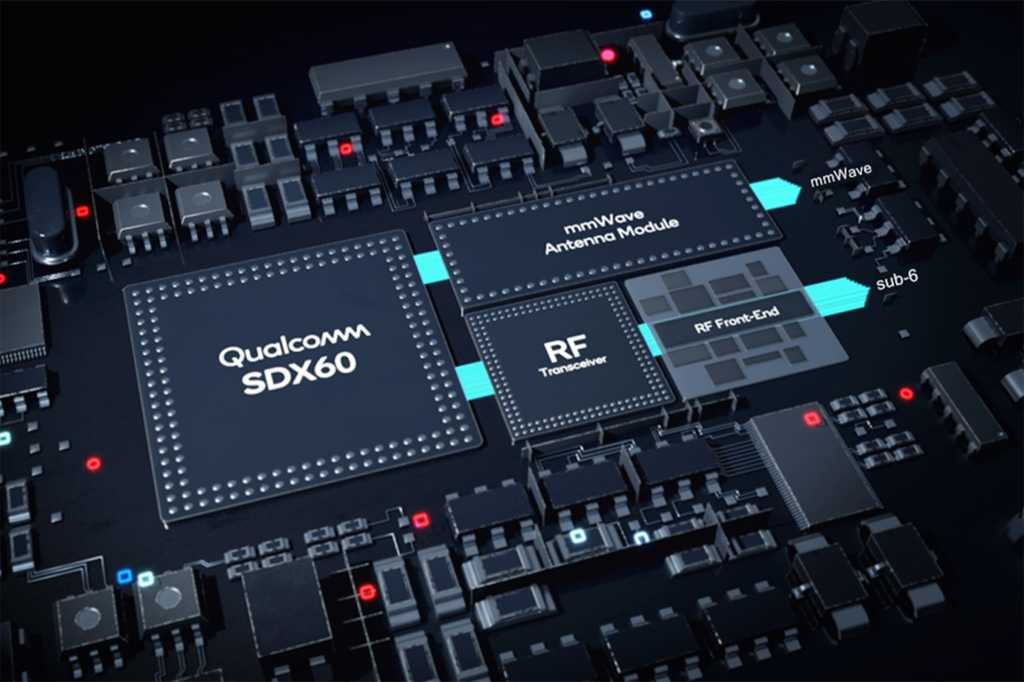 Qualcomm’s latest 5G modem isn’t the leap that the X55 was last year, but it might be more important. While the Snapdragon X60 5G Modem-RF System touts a slew of technical and practical enhancements to take full advantage of the next-generation networks’ tremendous speeds, Qualcomm’s new modem isn’t built for phones like the Samsung Galaxy S20 that are already on board with 5G, it’s made for the one that isn’t: the iPhone.

Let’s get the technical stuff out of the way first. The X60 is the first “to support spectrum aggregation across all key 5G bands and combinations.” That means X60 phones will be more futureproof than today’s X55 ones, supporting mmWave and sub-6 using frequency division duplex (FDD) and time division duplex (TDD) at a wider range of deployment. Plus, it can deliver up to 7.5Gbps download speeds and 3Gbps upload speeds, far greater than even the theoretical capabilities of the current 5G networks being built.

But while benefits like carrier aggregation and voice-over-NR are certainly important, the greatest improvement the X60 modem offers is in its size. Qualcomm’s new modem is the first to be built using a 5nm process, allowing for higher efficiency on a smaller footprint. That’s a big leap from the 7nm X50 and X55, and it’s unlikely anyone will be able to catch up anytime soon, including Apple. And that’s precisely the message Qualcomm wants to send.

It’s no secret that Apple will be climbing on board the 5G train with the upcoming iPhone 12, but what isn’t so certain is which modem it will be using. Apple and Qualcomm entered into a multi-year agreement to supply chips for the iPhone, which everyone assumes will include a 5G modem, especially since Qualcomm is basically the only game in town.

But after Apple scooped up Intel’s smartphone modem business scraps, reliance on Qualcomm isn’t part of Apple’s long-term plans. But the X60 shows that Qualcomm doesn’t see that path as an inevitability. By jumping to 5nm with the third-generation of its 5G modem, Qualcomm is delivering a smaller and more efficient modem, which just happens to be the very reasons why Apple would build its own modem in the first place. A smaller, more efficient modem would help Apple keep the iPhone thin without sacrificing battery life.

There’s also the issue of the antenna. A recent report from Fast Company detailed Apple’s efforts to design its own antenna for the iPhone 12 after rejecting the QTM525 5G mmWave antenna module Qualcomm currently makes due to its size. But a new antenna is on the way with the X60 modem, which “features a more compact design than the previous generation which allows for thinner, sleeker smartphones.”

If that’s not a direct response to Apple, I don’t know what is. Qualcomm wouldn’t even divulge exactly how much smaller the QTM535 modem is “for competitive reasons,” which basically a professional nyah nyah nyah-nyah nyah to Apple. Qualcomm wants Apple to know that its antenna won’t be as good.

So even if the new modem and antenna aren’t ready for the iPhone 12—Qualcomm was relatively vague about a timeline, only saying “commercial premium smartphones” using the new modem system are “expected in early 2021”—Qualcomm is putting tremendous pressure on Apple to deliver a system that’s better than the X60, lest we have another Antennagate on our hands.

So while Apple may be hard at work at a homegrown 5G solution for the iPhone and iPad, Qualcomm isn’t going to let the biggest premium phone maker get away that easily. With the X60 modem, Qualcomm isn’t just cementing its lead as the 5G supplier on Android phones, it’s also looking to lock up the iPhone for the foreseeable future. Sure, Samsung cares about thinness and battery life, but only Apple has the wherewithal to walk away. And Qualcomm doesn’t want that to happen.