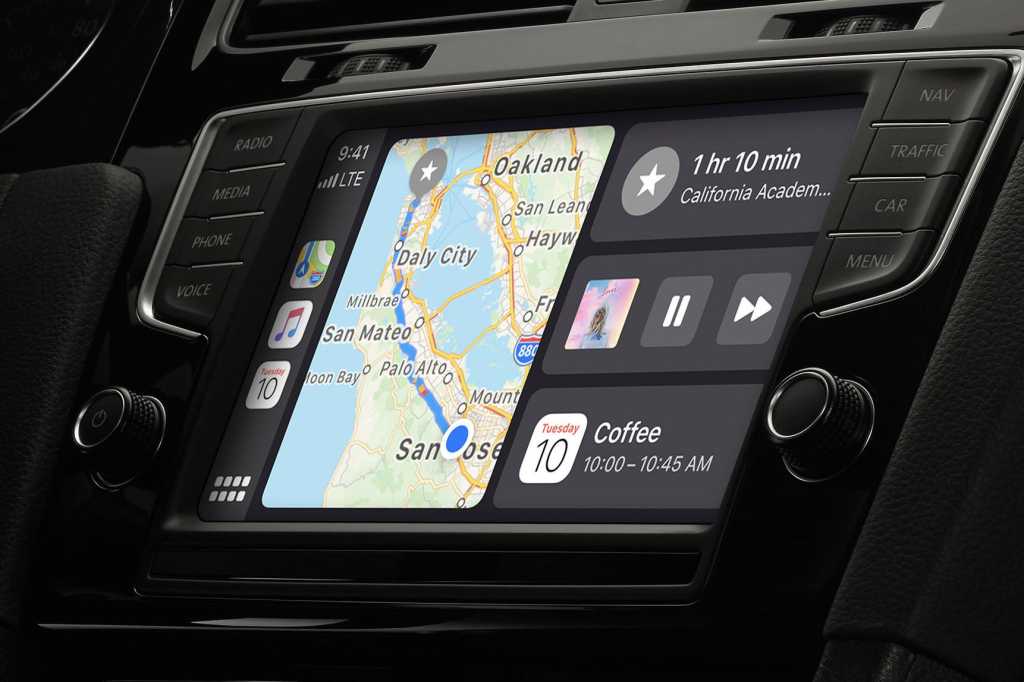 With very few exceptions, the navigation and entertainment software running on the dashboard touchscreens for modern cars is awful. Dated interface design, confusing layouts, and rarely-if-ever updated software and data.

Fortunately, Apple has a fix for that: CarPlay. It’s a built-in feature that turns your iPhone into the brains and interface for your car’s infotainment display, and it’s a huge step up from what you get in most cars.

Originally launched in 2014, CarPlay is now supported on a wide variety of vehicles. Here’s what you need to know about CarPlay, its supported devices and vehicles, and supported apps.

How does CarPlay work?

Using CarPlay on a supported car is easy. Just use your Lightning cable to plug your iPhone into the car’s USB port and select the CarPlay function on your car’s screen. The exact method of selecting CarPlay differs from one car to the next, but it’s usually fairly obvious.

A small but growing number of cars even have wireless CarPlay, which allows you to pair your phone and use CarPlay without plugging in a cord at all.

Once CarPlay has started in your car, the interface on your infotainment system will be controlled by your iPhone—the car is essentially a secondary iPhone display. The interface will feel familiar to iPhone users but it’s dramatically simplified, with big icons and touch targets, and very limited options. It’s meant to be used while driving after all, so everything is large, simple, and requires very few taps.

CarPlay gives you access to select messaging apps, audio apps, and navigation apps. It can read text messages aloud and transcribe your voice into text replies, which is a lot safer than texting while driving.

The latest CarPlay interface also suggests things for you based on the time, day, and your location—playlists or podcasts you often listen to, or directions to places you usually drive, for example.

CarPlay works on every phone from the iPhone 5 onward.

CarPlay was introduced in iOS 7.1, and has gone through a couple of big upgrades over the years. The iOS 13 update was the biggest one yet— it completely overhauled the CarPlay interface and made it possible for more apps to work with the system, like Waze and Google Maps. The most recent update came in iOS 14, whose changes are mostly cosmetic. Siri’s a little more useful, and the wallpapers are a welcome addition, but CarPlay is not dramatically different than in iOS 13.

It used to be easy to list all the cars that support CarPlay, because there were so few. Its popularity has greatly increased over the last few years and it’s now available in hundreds of car models, from Fords to Ferraris.

One of the last major holdouts was Toyota, but the company began including CarPlay in many 2019 models, and it’s available in most 2020 and later Toyota models.

Notably absent from the list is Tesla—the company controls the “full stack” for its software and doesn’t support any sort of secondary interface. You can connect your iPhone to your Tesla via bluetooth and listen to music, but you can’t get a phone-driven interface on screen.

There are too many car models with CarPlay support to list them all here, but Apple maintains a list of CarPlay compatible car models you can check.

How much does CarPlay cost?

CarPlay itself doesn’t cost you anything. When you’re using it to navigate, message, or listen to music, podcasts, or audio books, you might use data from your phone’s data plan. Depending on your cellular data limits, that may end up costing you.

Whether it costs money to get CarPlay support in your car is up to its manufacturer. While Apple doesn’t charge automakers a fee for the necessary software to integrate CarPlay, there are some costs associated with meeting the necessary hardware requirements.

In some car makes and models, it comes standard and is included in the cost of the car. Other models only support it as part of a premium upgraded infotainment system package, which often costs hundreds more but offers other additional features. Before you buy a car, you’ll want to ask if it has CarPlay support included.

Which apps work with CarPlay?

CarPlay is built primarily around core Apple apps like Maps, Music, Messages, and Calendar. But with iOS 13, Apple expanded the ability for manufacturers to tie into the system, and you can now use lots of third-party navigation apps like Waze and Google Maps, audio apps like Audible, Spotify, Pandora, and even messaging apps like WhatsApp and Facebook Messenger.

You don’t have to install anything special to use third-party apps; If you have a compatible app on your iPhone, you’ll see its app icon on the CarPlay display.

If you want to reorder your CarPlay apps, open Settings on your iPhone, then select General, then CarPlay. Tap the name of your car connection under My Cars and then Customize. You can then reorder or remove apps from the CarPlay interface.

How does Siri work with CarPlay?

You can use Siri to command CarPlay, using many of the same commands you use with your iPhone. You can ask for directions, start turn-by-turn navigation, play music or a podcast, or dictate a text message to someone.

If your car has a voice command button on the steering wheel, press and hold it in for a second or two, and you’ll see the Siri prompt on the screen.

If your car doesn’t have a voice button on the steering wheel, press and hold on the CarPlay dashboard or home button. After a couple seconds, the Siri prompt will appear and you can give a voice command.

Siri is more than just voice commands—it’s Apple’s name for all sorts of intelligent assistant functions, like smart suggestions. Siri will surface locations for calendar entries happening soon, offer to continue playing the podcast you were playing earlier, and suggest directions for locations you often travel to on those days and times, among other things.