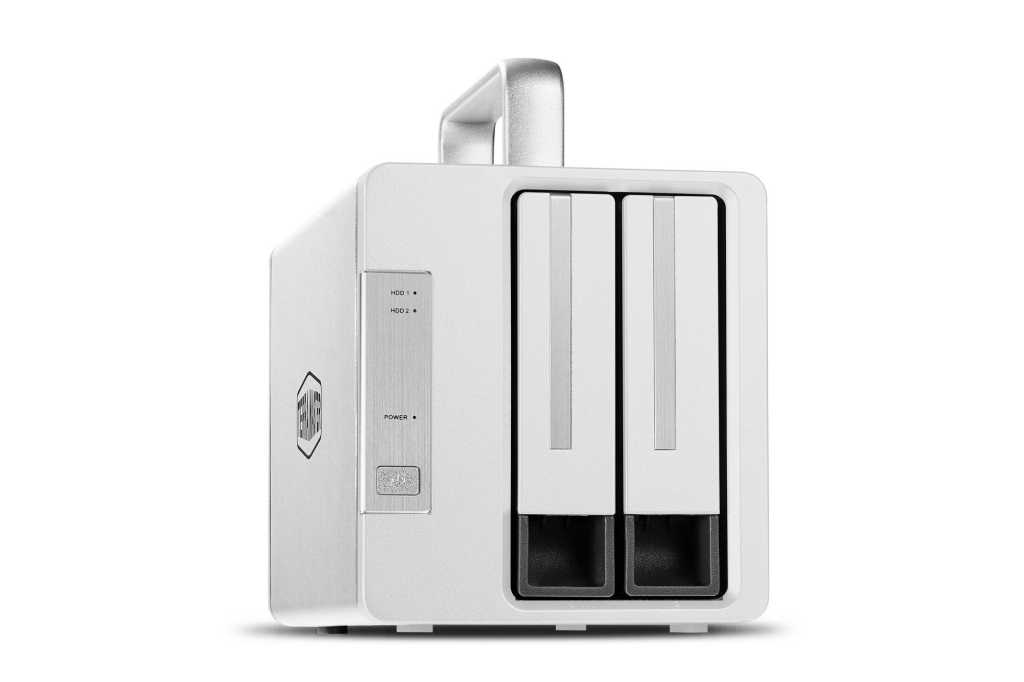 Image: TerraMaster
At a Glance

Though it’s a bit pricey, the TD2 is indeed the fastest external two-bay Thunderbolt 3 box we’ve tested–by a very narrow margin. The technology is quite likely overkill for a two drive box and you’ll get better bang for the buck with USB 3.1. With more drives, Thunderbolt’s greater bandwidth will tell. Still, a nicely designed, easy to set up and use product.

If you’re looking for fast, dual-drive external storage, the $250 TerraMaster TD2 Thunderbolt 3 RAID enclosure is as good as we’ve seen. It supports hard drives and SSDs, though there are far smaller and less expensive enclosures for the latter.

The real question concerning the TD2 and other two-drive boxes, is whether Thunderbolt offers enough of a performance gain over USB 3.1 to warrant the price premium. Similar performing USB enclosures, including TerraMaster’s own d2-310, are about a hundred bucks cheaper, so it’s a valid concern.

The TD2 can handle two 3.5-inch hard drives, two 2.5-inch hard drives, or two 2.5-inch SSDs. Hard drives might seem quaint to some, but spinning platters still offer far more capacity at a far lower price. Case in point: 14TB hard drives cost around $350 at the moment, while 2TB SATA SSDs run you about $200. Pro video editing requires lots of capacity. In fact, that’s the heading under which you’ll find the TD2 at TerraMaster’s web site.

On the back of the box are two Thunderbolt 3 ports, as well as a full-sized DisplayPort. A rotary dial allows you to set the unit to mirrored RAID 1 (slower and safer), striped RAID 0 (faster with no data redundancy), JBOD (Just a Bunch Of Disks—spillover, no redundancy), and Single, where the drives will show up separately.

You can change modes by turning the rotary switch to the desired mode, then pressing and holding the tiny reset button for 10 seconds. TerraMaster thoughtfully provides both a tiny screwdriver for the rotary switch and a reset tool.

You can change modes after you’ve installed the drives, but when you first install them, they should be clean, i.e. virgin or de-partitioned. Otherwise, the two LEDs on the front will frown a constant red to let you know that you should stop and think about exactly what might be on those drives. Mistakes do happen.

The status lights will be green when everything’s okay, and blink upon access. A combo orange means the TD2 is busy formatting or doing housekeeping.

The TD2’s performance with hard drives was as expected, though if you haven’t shopped hard drives in a while, you might be a bit surprised at the high numbers. The two 14TB Seagate IronWolf hard drives used for testing are capable of sustained reading and writing at 250MBps, though of course, random access is slow as molasses compared to SSDs. The first two images show Blackmagicdesign’s Disk Speed Test in RAID 0 and RAID 1 on a recent vintage MacBook Pro.

As you can see above, sustained performance is quite good with hard drives in stripped RAID 0 (data is split between drives)—roughly that of a SATA SSD. In mirrored RAID 1 where the same data is written to both drives, you get roughly half the performance shown—about what you see with a single hard drive.

Now for the USB performance numbers courtesy of the aforementioned d2-310. You might be surprised, you might not.

Obviously, the story here is how close the d2-310’s numbers are to the TD2’s. It speaks volumes as to the inability of a pair of fast modern hard drives to saturate even the slower USB bus. Once you start talking four- or five-bay boxes running in RAID 5 or striped, Thunderbolt’s wider pipe will tell mightily. But we’re not talking that, and the benefits with two drives are fairly mild, if any.

Just to show that the d2-310 is not an isolated case, here are the Akitio NT2 U31’s numbers with the same two Seagate hard drives.

Though there are other boxes more suitable to 2.5-inch drives and SSDs, here are the TD2 results with two decently fast SATA 6Gbps Crucial 2.5-inch SATA 6Gbps SSDs. Though not shown, the two USB boxes posted similar results.

I also ran both the TD2 and d2-310 through PCWorld’s test suite and the results skewed more towards the Thunderbolt 3 TD2. There seem to be  some situations where the Thunderbolt bus holds an advantage even when its bandwidth isn’t being taxed.

For some reason, the USB d2-310 in RAID 1 didn’t cut the CrystalDiskMark 6 sustained write mustard. At least compared to the other drives.

If you espied the fan in the image of the rear deck of the TD2 above, you can see it’s quite large. It’s also pretty quiet. In fact, I never noticed it at all, though users more sensitive to white noise might. The unit ran cool to the touch with the two hard drives churning full blast even with the fan being minimally audible.

If you don’t place anything vital on your storage, or are using it as simple backup, you can skip to the end of the article. If you do, then you need to either run the TD2 in RAID 1, or use two of them so you have a backup. Performance in RAID 1 will be about that of a single external drive and you don’t get RAID 0’s doubled capacity. What you get is peace of mind knowing your data will be safe and still available even if a drive fails. Recovery from RAID 0 failure is a pricey operation and you’re down until the recovery is complete.

Think it can’t happen to you? Just a month ago I had a recent vintage 12TB Seagate Barracuda drive exceed the SMART error limit after a mere 400 hours online. That means something is definitely not copacetic on the platters. If you want speed and redundancy, buy a RAID 5-capable box such as TerraMaster’s own D5.

The TD2 is great box for use with modern, ultra capacious and fast 3.5-inch hard drives. If you want every last ounce of performance from those, it’s a great product. I don’t recommend it for SSDs, simply because SSDs don’t provide the capacity, and you can get smaller boxes such as AFT’s VX-2SSD that handle those for far less money.

And in case I wasn’t clear enough, there are also two-bay USB-connected enclosures supporting 3.5-inch hard drives that offer nearly the same, and in some cases, better performance for $100 less. The d2-310 and Akitio NT2 U31C being just two examples.

None of that makes the TD2 a bad product. If you have a pressing reason to use Thunderbolt, then as I said, it’s as good as we’ve seen.