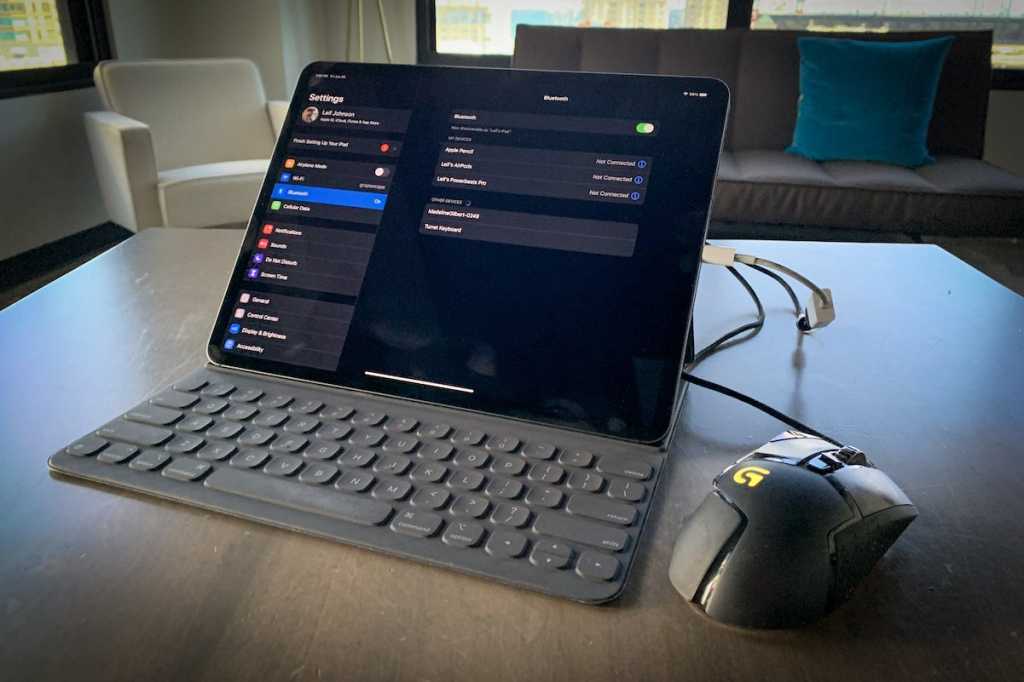 When I first read the report in The Information last week that Apple was developing a Smart Keyboard Folio with a trackpad, I was intrigued. It’s been a while since there was an iPad rumor of any substance, and with a refresh supposedly a month away, such a dramatic change to the iPad’s mission statement would turn a humdrum announcement into a riveting one.

But then I pulled out my 12.9-inch iPad Pro and tried to imagine how it would go. The lack of a trackpad or a mouse is the least of the iPad’s problems. Selling a Smart Keyboard with a trackpad might make a few iPad die-hards happy, but for the majority of users, it wouldn’t change much about their day-to-day tablet.

A trackpad wouldn’t magically transform the iPad into a Surface or even a Mac. It would be an overpriced, clunky input device that adds a level of confusion and does little to push the platform forward.

For the past 10 years, the iPad has cemented its legacy as the leader of the tablet market. Even without any meaningful changes to its core functionality, the iPad is far and away one of the best portable devices for both creating and consuming content. An ever-growing app catalog has continued to invigorate and strengthen the iPad as productivity-minded accessories have added to its capabilities.

But even with home screen widgets and USB-C, the iPad is still an extension of the iPhone. That’s not a criticism—that’s what it should be. From its original introduction to the pro model Apple sells today, the iPad’s success is built on its simplicity and ease of use. You don’t need to master gestures or multitask to get things done on the iPad, and if anything, they’re secondary to the experience.

But a trackpad would change things. More than the Smart Keyboard or even the Apple Pencil, a trackpad would require a fundamental rethinking of the iPad’s input and navigation, and the only way to really do it right is to treat it like Microsoft’s Surface. Yes, the keyboard/trackpad is an optional accessory, but you really need one. By adding a trackpad, the Smart Keyboard becomes the primary method of operation. It’s no longer a tablet, it’s a 2-in-1.

The problem is, you still have all of the limitations of an iPad, just in the body of a laptop. When you sit down with a Surface, you’re getting a truly portable hybrid Windows 10 machine, but an iPad with a trackpad is…what? It’s an iPad with a trackpad. Unless Apple has plans to dramatically overhaul its capabilities—and I can’t imagine it does—a trackpad doesn’t make the iPad any more of a productivity device. At best it makes selecting text a little easier.

I’m not saying I want the iPad to run macOS. Nor do I want Apple to change much about iPadOS, at least not fundamentally. But if Apple is going to launch a Smart Keyboard with a trackpad, one of three things will happen, neither of which offer an ideal solution:

The first option is the easiest, but it’s also the least likely. Simply adding a cursor to the iPad would basically go against everything Apple has ever said about the iPad. A cursor makes it a computer with a cursor, and Apple has gone to great lengths to sell the iPad as a post-PC device. It would be relatively easy for people to grasp but it would take away the iPad’s charm.

The second option is intriguing but ultimately too confusing. If Apple were to make the Smart Keyboard trackpad a gesture-only area—meaning you could swipe up to get to the app switcher and pinch to return the home screen but not launch an app—it would be tricky for most users to grasp.

The third option seems the most Apple-like. Much like Split Screen, developers would need to opt-in to support the Smart Keyboard trackpad, and functionality would depend on what the developer wanted: text selection, drawing, zooming, etc. Some apps would work and some wouldn’t, but all of Apple would be supported, as well as a few hand-picked launch-day titles. I can even see the tagline now: Multi Multi-Touch.

But even with a controlled launch that keeps basic navigation intact and limits trackpad functionality to pro-level users, a frustrating middle ground is the wrong direction for the iPad. Adding a trackpad wouldn’t make the iPad a better tablet or a better laptop, and it would require a reimagining of what the iPad is. Apple would need to explain why it suddenly is allowing a trackpad, why touch isn’t best for some instances, why it’s only for pro users, and justify the cost—all of which would be exhausting and ultimately unnecessary.

For the past 10 years, Apple has been trying to bridge the gap between the iPad and the Mac by piling features and functionality on top off an iOS built for the iPhone. With iOS 13, it finally split the OSes in two, giving Apple a chance to truly differentiate the iPad and the iPhone, not bring it closer to the Mac. The Surface is really the only device that has successfully added a trackpad to a tablet and that’s because it’s not really a tablet. It’s a laptop that can detach.

Simply put: the iPad isn’t a Surface, and it shouldn’t aspire to be one. Nothing against Microsoft’s hybrid tablet, but the Surface is a PC and the iPad isn’t. Adding a trackpad wouldn’t suddenly turn the iPad into a 2-in-1.