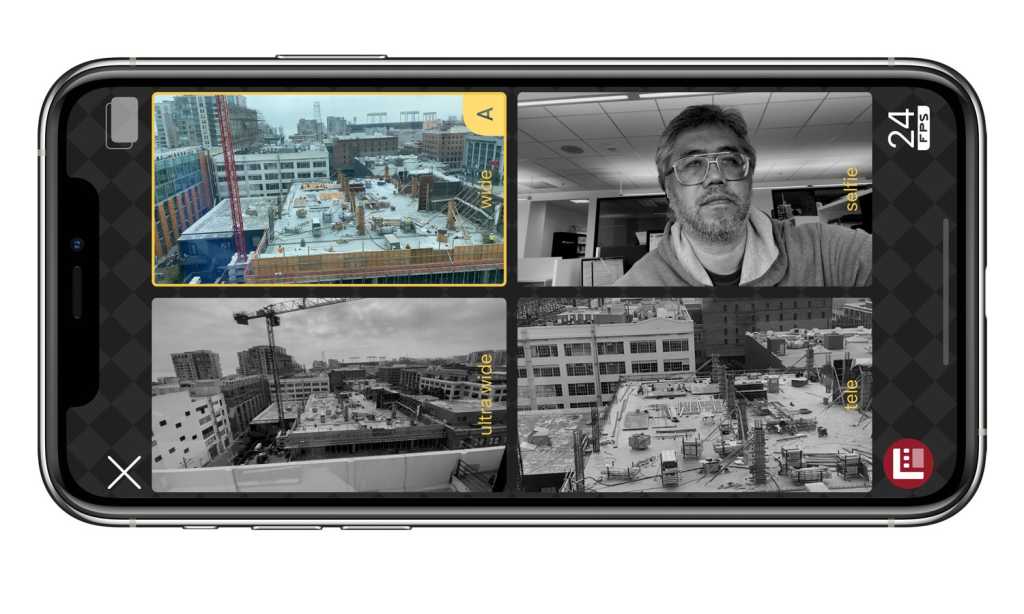 As if a new third camera on the back of iPhone 11 Pro wasn’t enough to get excited about at Apple’s September, 2019 keynote, creators of popular video capture app Filmic Pro were also in attendance to preview a forthcoming update that promises to take full advantage of the hardware.

Although Cohen touted the feature would come to Filmic Pro later in the same year, the calendar rolled over to 2020 with the promised update nowhere in sight. Instead, the company debuted an entirely new app which provides a tantalizing look at what the future holds for iPhone videographers.

As the name implies, DoubleTake by Filmic is a separate, standalone app that’s more of a teaser for the eventual update yet to come. Although the app does allow shooters to select from any of the four lenses built into iPhone 11 Pro, DoubleTake can only record from two cameras simultaneously.

Although that may come as a disappointment, it’s worth noting DoubleTake is a free app, one which Filmic likely views as “proof of concept” software intended to work out any final kinks in the code before rolling four-camera support into the core app. Viewed in this light, DoubleTake is an impressively handy camera app that does what it promises and nothing more.

Admittedly basic compared to Filmic Pro, DoubleTake provides full-frame focus and exposure, as well as the ability to choose between 24, 25, and 30 frames per second recordings. There’s also a Quick Launch button in camera picker mode which launches FilmicPro, with a similar shortcut also added to that app for jumping straight to DoubleTake instead.

DoubleTake is super-easy to use. Tap the camera picker, which opens a view of all available lenses separated into four quadrants. Select the camera you want to use as the “A” lens to highlight it in yellow, then repeat to select the “B” camera. Should you change your mind, tapping a selected lens the second time will deselect it.

Now tap Confirm, followed by the Record button in the lower right corner to start capturing; a second tap stops the recording. The A camera fills the screen, while the B camera appears in a small box at lower right, which can be moved elsewhere by dragging it to a new location or hidden completely by swiping it off to the edge. The B camera can also be expanded to fill the screen, where you can swipe to flip between views.

By default, DoubleTake works in Discrete mode, recording each camera as a separate video ready to be imported into Final Cut Pro X or other nonlinear editing software, including the excellent LumaFusion for iPhone or iPad. Like Filmic Pro, DoubleTake offers no built-in video editing tools of its own, but files are recorded in lock step with each other, so editing is just a matter of lining up the start of both clips in the timeline and cutting between them, a task made easier with multi-angle editing in FCPX.

I used DoubleTake to record a recent church service, where the app performed flawlessly for the entire 90 minutes of recording. Although AirDrop failed to transfer the resulting 20GB-plus files to my iMac 5K, plugging the iPhone 11 Pro Max into the computer via USB to Lightning cable allowed copying larger files from DoubleTake’s in-app library to an external volume right from the Finder with macOS Catalina. (You also have the option to save videos directly to Camera Roll.)

DoubleTake introduces two unique features the company didn’t reveal at the September keynote: The ability to record video from two cameras side by side in Split View, or have one camera composited into the other for fast, easy Picture-in-Picture. Unlike Discrete mode, both cameras are recorded to a single video instead, so moving the small PiP window while recording is in progress will also be captured. Both modes work particularly great when using the front-facing camera in tandem with one of the iPhone 11 Pro’s three rear lenses for podcast interviews, side-by-side comparisons, or just capturing an event from two different views.

It’s important to note Apple’s multi-cam capture API maxes out at 1080p HD, so DoubleTake is unable to record 4K video at all. The same API also limits dual recording to recent iPhone models, although older unsupported devices have to make do recording from a single camera.

DoubleTake only records two cameras simultaneously, but otherwise this is a capable, convenient way to shoot split-screen or PiP video, no post-production necessary.