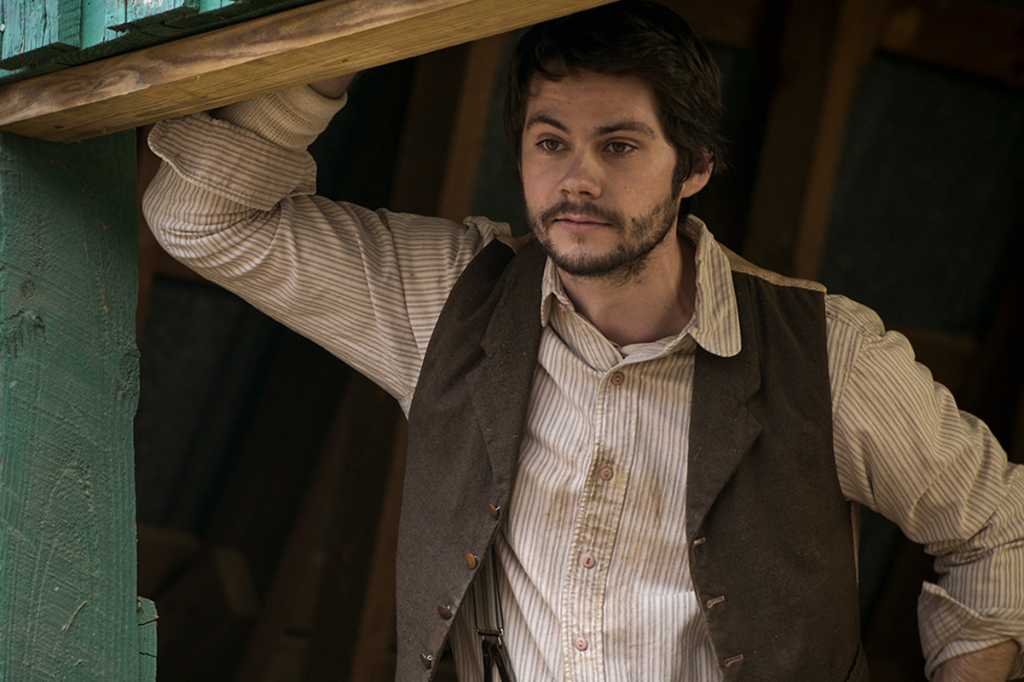 It’s fitting that the first episode of Apple TV+’s Amazing Stories focuses on time travel, as the series itself is a reboot of Steven Spielberg’s 1985 Emmy-award winning series that in turn was inspired by a science fiction magazine that started publication in 1926. That’s 94 years of history wrapped up in that name, which is almost the span of time that separates the two main story arcs of this hour-long tale. Judging from what we see here, Amazing Stories has a bright future ahead of it as well.

The opening scenes of “The Cellar” introduce us to Sam (Dylan O’Brien), a young man who helps his brother Jake (Micah Stock) restore an old home in rural Iowa. These are this episode’s weakest moments. The script isn’t as comfortable in the modern world, and the earliest scenes leave an aftertaste akin to what you might feel while watching a Hallmark production.

For example, Sam seems more interested in swiping right on Tinder (on his iPhone, of course), which prompts his brother to ask if he enjoys being such a stereotypical millennial. Later, this conflicts with suggestions that Sam feels out of place with the modern world.

But the episode quickly finds its footing once it whisks Sam away to a century in the past, where the lavish sets bring 1919 to life and the cast draws our attention to the pitiable status of women. (It’s also an excellent opportunity to take notes on how to accurately restore the home Jake is working on, but Sam apparently never realizes this.)

But above all, “The Cellar” finds its way when it introduces us to Evelyn Porter (Victoria Pedretti), whose expressions and singing sequences allow her to steal every scene she’s in. It’s probably a happy accident, but Pedretti’s talent so far outstrips everyone else here that it highlights how ill-fitted Evelyn is for the age she was born to. Theirs is a bittersweet tale—a love story entwined with time travel—and in that regard it’s faintly reminiscent of Stephen King’s 11/22/63. It has some good things to say about destiny and how two people can be meant for each other in ways they may not expect. To say more than that would give too much away.

“The Cellar” also establishes what Apple (and producers including Spielberg) plan to do with Amazing Stories. This is a callback to an age when science fiction was filled more with wide-eyed wonder rather than fear and dire warnings about the future. Unlike Black Mirror, it (so far) has no desire to frighten us with the dark possibilities of technology—that is, if you don’t count Sam’s predilection for sneaking peeks at his phone when he should be ripping up century-old floorboards.

It also delivers a recognizable but small dose of that “movie magic” that’s so familiar from Spielberg’s earlier work. Even if you’re not familiar with Amazing Stories itself, there’s a good chance you’ve heard of the Spielberg-produced 1987 flick Batteries Not Included, which originally started life as an Amazing Stories concept but was expanded into a feature film written by Brad Bird. In that story, a group of living robots help an elderly couple avoid having to close their café in New York’s East Village while new construction begins to tower around them. It was merely an “okay” film, but it conveyed a lot the same family-friendly science fiction-based wonder we find in “The Cellar.” “Amazing” is a bit too strong of a word for what Apple gives us in this episode, but we could use a little more of this wonder in the world.

But let’s pull back a second. One of the most “amazing” things about Amazing Stories is that Apple only dropped a single episode, breaking with the traditions we’ve seen from every other Apple TV+ production so far. For the early main shows like The Morning Show or Servant, Apple followed a Hulu-style approach by dropping three episodes at once on launch day and then following up with new episodes every Friday after that. For Little America and Mythic Quest, Apple dropped the entire season at once, and for a while it looked like this would be Apple’s approach going forward.

For this, though? For the moment, it’s just an “Amazing Story.” At least this approach makes some sense: Because every episode of Amazing Stories presumably focuses on a self-contained story, there’s no need to drop a few episodes at once in order to lure in viewers. Instead, with one episode releasing once per week, we have something to look forward to without having to endure the frustration of waiting a week to learn what happens in a continuous story.

It’s also about time Apple released a series like this. If you don’t count the kid-oriented shows like Snoopy in Space or Ghostwriter, this is the first mainline show to hit Apple TV+ with a preexisting fanbase and a familiar pedigree. “The Cellar” isn’t fully convincing proof that this reboot can live up to the achievements of the ‘80s series, but it does provide a recognizable lure for bringing in people who may not be as interested in original content like See and Dickinson. By bringing such a recognizable name into its content library, Apple also adds an additional layer of legitimacy to its service. After this, it’d be nice to see Apple landing some other recognizable properties as well.

As for “The Cellar”? It’s a pretty good story. But here’s to hoping the next episode takes us fully into “amazing” territory.