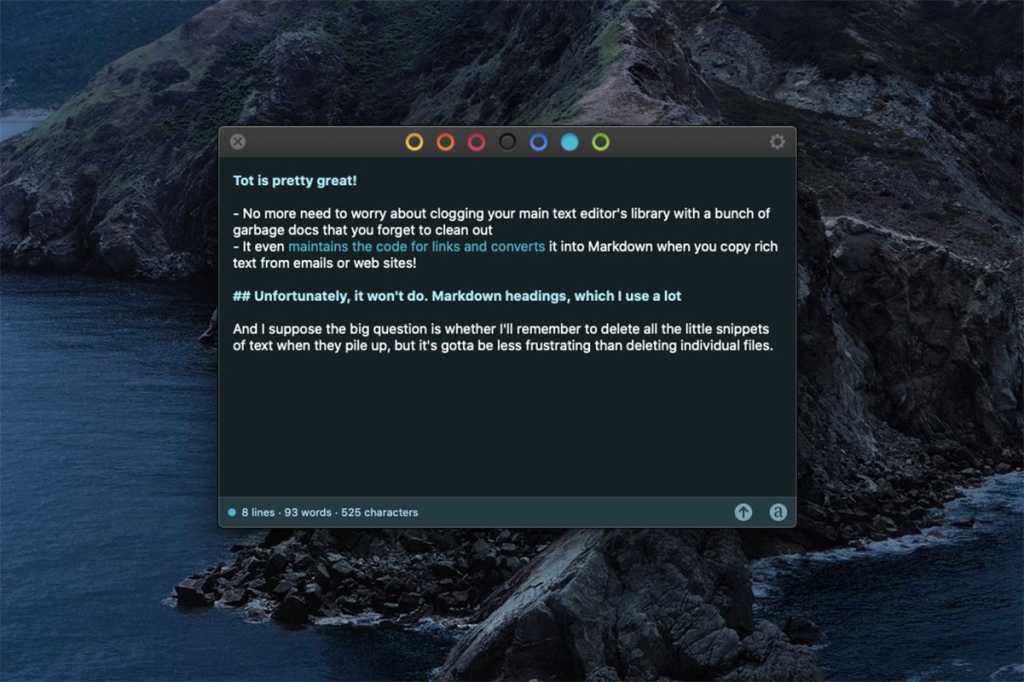 When I first heard about the Tot app, I admit my first thought was, “Aw, not another notetaking app.” Lately the new ones might as well be clones, as they usually only differ from each other with some minor tweaks on familiar features.

But Tot (or Tot Pocket Remove non-product link as it’s called on iOS)—a new, purposely limited notetaking app for iOS and macOS—warrants your attention. Not only does it introduce more than one fresh idea, but it also solves a specific and common digital notetaking problem.

Frequent users (myself included) of notetaking apps tend to deal with links, snippets of text, and copied passages by just jotting them down in new documents littered between an app’s serious “notes,” which, in my case, often include lengthy drafts in iA Writer and Ulysses. Tot give those little snippets of text a home of their own, and largely does a good job of it. Whenever enough of these pile up in other apps, I have to set aside a few minutes of every week or month to delete the old ones, and I’ve always hated that. Tot solves his problem so well that’s it’s already become an integral part of my workflow, even though I’ve only had it for around a week.

I described Tot as a “purposely limited” above, and remarkably, it’s appealing because of those limits rather than in spite of them. This is most apparent in the way it handles documents. Most notetaking apps let you create an unlimited amount of documents, but Tot only lets you choose between seven different sheets within the same interface. This is especially satisfying on the iPhone, as a little haptic tap accompanies each swipe. You have to click on the dots representing each document on the Mac, but the interface looks exactly the same and the automatic syncing takes a couple of seconds at most.

I love this design because I don’t have to create a new file every time I just want to write a quick grocery list—or, in my organized moments—I don’t have to hunt down a specific file in an app like iA Writer I made for that purpose alone. I can just add these snippets to existing Tot documents. Tot doesn’t even let you title its documents, and unfortunately its idiosyncratic design means you also can’t find information included in Tot through Spotlight. That rarely matters, though, as there’s rarely any question as to where I dropped a snippet in Tot because it offers so few files to choose from.

And while Tot limits actual document creation, it doesn’t restrict word counts. Just to be sure, I pasted in the entire 570,000-word text of War and Peace and it fit just fine. As it does with all files, Tot also told me the number of lines in the story, the word count, and the number of characters along the bottom of the document. Since there’s no limit on text, I highly doubt I’ll ever need more than seven sheets.

This still could have caused problems if every document looked the same, but Tot makes each sheet distinct by assigning each of the seven pages different pleasant colors that change depending on whether you’re in light mode or dark mode. (You can turn off the colored backgrounds if you wish.) And it goes even deeper than that. At the top of each page, you’ll find seven dots representing the background colors of each document, and developer The Iconfactory elaborated on that visual design language by identifying documents with text in them with a thick colored outline. The document you’re actually working in will always show a solid circle.

Tot also supports Markdown, but its approach is a bit odd. First, let’s talk about the good stuff. Tot impresses me because it lets you edit in both Markdown and rich text through a simple toggle at the bottom of the interface, and I like that it usually converts copied rich text snippets into Markdown when you copy and paste them from other documents and sites (aside from font and font size). For that matter, you don’t have to keep each of the seven files in either rich text or Markdown. Tot remembers the settings, and it’ll even maintain them when you switch from an iPhone to a Mac or vice versa.

But Tot’s approach to Markdown and text editing feels limiting in other ways, and not in the appealing sense we saw in the documents. For example, Tot’s Markdown capabilities do not support the common “##” code used for bold headlines, which I frequently use in my Macworld stories. I’ve tried to convince myself that this is because Tot sees itself as a “scratchpad” app rather than a fully-fledged text editor like Ulysses, but it still strikes me as a bizarre omission. And Tot doesn’t automatically extend bulleted lists when you tap Return or automatically format a line into a bulleted list when you type a hyphen before a word. I outline most of my stories, and so this is a key part of my workflow in apps like Bear or iA Writer. Considering that Tot is expressly aimed at users making ephemeral notes like outlines or shopping lists, this feature’s absence makes little sense.

Which leads us to something else that may not make a lot of sense for many users: The Mac version of Tot is completely free, but you’ll have to pay $20 to get the iPhone and iPad version. And to get the most out of Tot, I think it’s a good idea to get both. I do a lot of the actual text entry for Tot on my Mac, so then I have the crucial information at my fingertips when I need to, say, look at a confirmation number or take a peek at my grocery lists. Which reminds me—it’s a shame there’s no Apple Watch counterpart.

While you’ll probably experience some sticker shock, this price isn’t as bad as initially sounds. After all, it’s a one-time buy. iA Writer still uses this pricing model, but you have to pay $8.99 for the iOS and iPadOS version and $29.99 for the Mac version. Other prominent notetaking apps increasingly follow a subscription model. Bear charges a mostly agreeable $14.99 a year for its pro features. Ulysses—which I’m writing this on—charges a whopping $40 a year (or $4.99 per month). Compared to all of these options, Tot’s pricing actually comes off as rather agreeable as a result, and considering the clear industry trends, I’m honestly surprised Tot isn’t on a subscription model.

Tot is worth its price. it has eliminated my frustrations with dozens of “trash” documents with text snippets in apps like iA Writer, and it does this so elegantly that I kind of wish Apple would have come up with the idea itself. When I’m done with the information on the page, I simply delete it and clear room for future pasting.

I like Tot well enough that it already commands a spot of honor on my iPhone’s home screen and my Mac’s dock, as it gives me a convenient place to dump links, quotes, or facts relevant to whatever project I’m working on. The pricing model will surprise some users and I remain a little puzzled by a couple of the Markdown decisions, but I’m ready to see how big this Tot will get when it grows up.