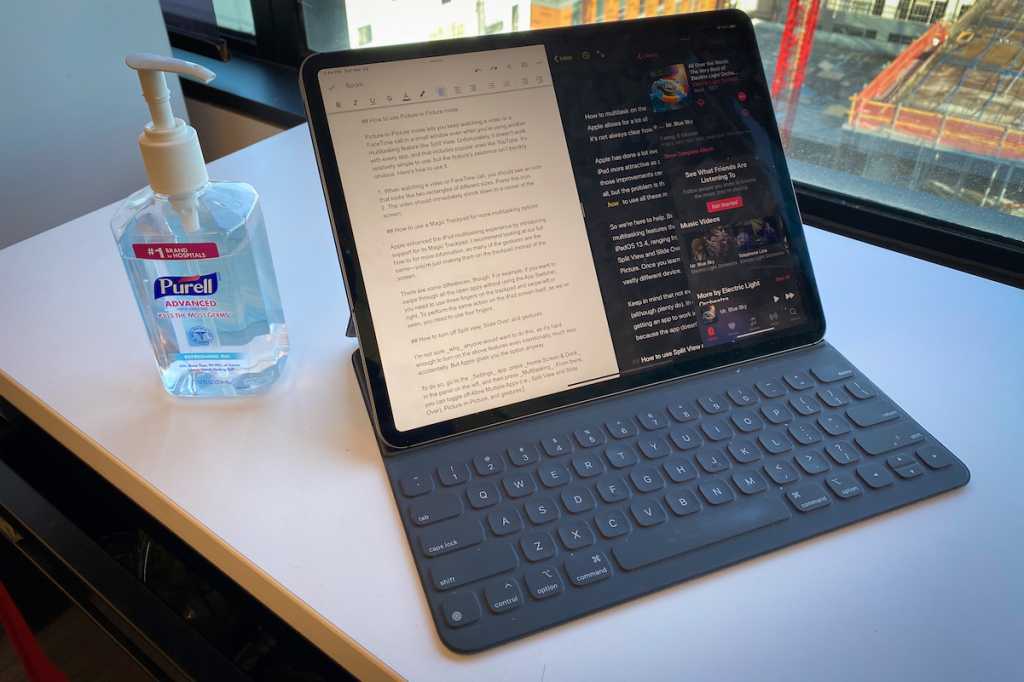 Apple has done a lot over the last couple of years to make the iPad more attractive as a laptop replacement, and many of those improvements center on multitasking. That’s great, but the problem is figuring out how to use all these multitasking tricks.

We’re here to help. Below, we’ll show you all the multitasking features that work with most current iPads as of iPadOS 13.4, ranging from relatively familiar concepts like Split View and Slide Over to trickier features like Picture in Picture. Once you learn them all, Apple’s tablet can feel like a vastly different device.

Keep in mind that not every app supports all these features (although plenty do). In other words, if you’re having trouble, say, getting an app to work in Split View, that may simply be because the app doesn’t support it.

How to use Split View multitasking

Split View multitasking—or “split-screen,” as you’ll often hear it called—is probably the most common means of multitasking on the iPad, as it allows you to view two apps side-by-side. It doesn’t work with every app, and you can only use it with apps you have in the Dock: either in the “permanent” library on the left side or in the “recently” opened section on the right. Fortunately, you can add many apps to the Dock now by dragging down their icons from the home screen and the following pages of apps.

In some cases, you can even open two windows from the same app with Split View. Unfortunately, you generally won’t know if this works without experimenting. Here’s how Split View works.

To adjust the sizes of the windows in Split View, press your finger on the vertical thin gray line between the windows and move it to the right or left as desired.

To replace one of the apps in Split View with another app, simply repeat the steps above, but remember to drag the new app into the middle of the window for the app you want to replace.

How to close Split View

In the middle of the Split View interface, you’ll see a divider that lets you adjust the sizes of the app windows. Put your finger on the thin gray line in the middle of the divider and push it toward the app you want to close—and keep pushing it off the screen until the app vanishes.

How to use Slide Over

Slide Over lets you open some apps in a narrow sliver of a window that floats on the left or right side of your screen. It’s a little tricky to use, and it frequently ends up covering up key parts of whatever you’re watching or reading in the app behind it. Still, it’s a nice option to have, especially for apps like Music that you might just want to glance at quickly. Here’s how to use it.

The app should immediately appear in a Slide Over window, either to the left or right of the screen, depending on which direction you trended toward as you pulled it from the dock.

You can also convert a Slide Over window into a Split View window by pressing down on the thin gray line and then dragging the window to either lower corner of the screen. To make a Split View window go back to being a Slide Over panel, press the thin gray line and then drag the app window to the middle of the app that’s on the other side of the screen.

How to multitask with three apps with Slide Over

You can also use Slide Over to multitask with three apps at once by opening two apps in Split View and then opening the third app with Slide Over. This is especially useful for apps like Music, which don’t have to be on the screen the whole time for reference.

To do this, first open two apps at once with Split View. Then drag the new app directly over the thin gray line in the middle of the divider for the two apps. Release your finger, and the third app will appear in a Slide Over window.

How to use drag-and-drop for iPad multitasking

Features like Split View and Slide Over aren’t just useful for comparing notes and the like: You can also use them to share information between two apps. This works with text, images files, and all kinds of other options, and in many cases it saves a little bit of time compared to copying and pasting. For the purposes of this how-to, I’ll use text as an example.

The App Switcher allows you to easily switch between all other open apps, roughly like Exposé on the Mac. To use it, swipe up from the bottom of the screen, but—while still holding your finger down—stop somewhere around the middle of the screen. Then lift your finger. You should then see previews of all the apps you have open, and you can sift through them by swiping to the left or right. Press the preview of the app you want, and the app should open.

How to swipe between all open apps in full-screen mode

You can also just swipe through every open app while each app is in full-screen mode by placing four fingertips on the screen and then swiping left or right. As we saw above, you can also change to the App Switcher proper by pinching those four fingers together.

How to use Picture-in-Picture mode

Picture-in-Picture mode lets you keep watching a video or a FaceTime call in a small window even when you’re using another multitasking feature like Split View. Unfortunately, it doesn’t work with every app, and that includes popular ones like YouTube. It’s relatively simple to use, but the feature’s existence isn’t terribly obvious. Here’s how to use it.

How to use a Magic Trackpad for extra multitasking options

Apple enhanced the iPad multitasking experience by introducing support for its Magic Trackpad. I recommend looking at our full how-to for more information, as many of the gestures are the same—you’re just making them on the trackpad instead of the screen.

There are some differences, though. For example, if you want to swipe through all the open apps without using the App Switcher, you need to use three fingers on the trackpad and swipe left or right. To perform the same action on the iPad screen itself, as we’ve seen, you need to use four fingers.

How to turn off Split View, Slide Over, and gestures

I’m not sure why anyone would want to do this, as it’s hard enough to turn on the above features even intentionally, much less accidentally. But Apple gives you the option, anyway.

To do so, go to the Settings app, press Home Screen & Dock in the panel on the left, and then press Multitasking. From there, you can toggle off Allow Multiple Apps (i.e., Split View and Slide Over), Picture-in-Picture, and gestures.