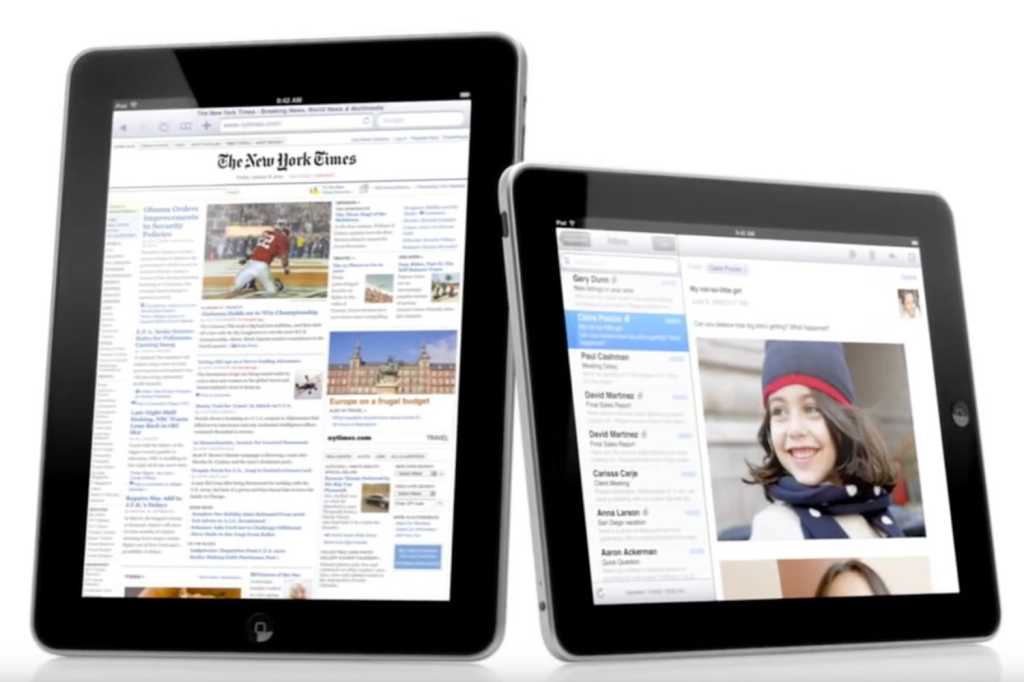 It was “a wholly new product,” a “futuristic gadget the likes of which we’ve never seen before” that would somehow “soon be viewed with the same nostalgia-tinged contempt we have for the original iPod and iPhone.” After months of debate and speculation in the aftermath of its announcement, ten years ago this week the original iPad arrived and I finally got to review it.

Anniversaries are an opportunity to look back in time and ponder how much has changed. I’m happy to report that despite spending a bit too much time dewlling on how the iPad didn’t run Flash, my review from April 2010 does a pretty good job of encapsulating the potential of that original iPad. Re-reading that review today also reminds me that we’re still debating a lot of the same issues that the iPad brought up when it was introduced. The more things change, the more they stay the same.

The future is now retro

I don’t have to go back and read words I wrote a decade ago to access my memories of that era. They’re permanently etched in my mind. No piece of Apple hardware save for the original iPhone was as revelatory as that original iPad. As I wrote back then:

The iPad may be the most impressive piece of Apple hardware I have ever handled…. It’s a fantastic piece of hardware, inside and out, but more than that, it’s the apotheosis of Apple’s design philosophy, synthesizing cutting-edge hardware design with innovative system and application software into a single, unified product. Holding the iPad feels like you’re holding the future, and not in a hazy dream-like way, but in a I can’t believe I’m actually here kind of way.

That last part is my overriding memory of the occasion: The iPad felt like the future, like a prop from a science fiction movie, something that we’ve assumed would eventually be invented—at an indeterminate point later in the 21st century. And here I was, sitting on the edge of my bed, pulling it out of its box and powering it up.

The original iPad still feels great. (I still have mine.) It’s got a combination of traits that no other iPad has ever had, thanks to the curved aluminum back and flat sides. Apple redesigned future models to have flat backs and tapered edges, though the flat sizes are back in vogue thanks to the 2018 and 2020 iPad Pro. Yes, the bezels are enormous and the screen—impressive for 2010—now just looks grainy and weird, because Retina resolutions have ruined older screens for me forever.

But it’s still a solid piece of tech, through and through. What was a document from the future a decade ago is now a piece of retro tech, charming in how primitive it is. So it goes.

Get ready to accessorize

Something I couldn’t understand until I first held the iPad in my hands was just how important accessories would be. “One of the biggest challenges to using the iPad is simple logistics,” I wrote. “Where do you put it, and can you see and touch the screen comfortably from there?” I quickly found myself getting uncomfortable using the iPad, and declared that Apple’s original ugly iPad case was going to be more useful than I had expected. Propping up the iPad for typing or for using as a video viewer were necessities.

In many ways, you can’t tell the story of the iPad over the last decade without telling the story of the accessories that helped it fit into all sorts of different uses. That first iPad case was a flop, but Apple quickly caught on and started to design iPads with accessories in mind. Magnetic smart covers and cases led eventually to the Smart Keyboard. The second Apple Pencil is designed to dock on a magnetic charging port built into the side of the iPad Pro. And the forthcoming Magic Keyboard goes even further down this path, turning the iPad Pro from a light touch tablet to a heavier, laptop-like productivity device complete with trackpad.

The original iPad even shipped with its own keyboard, though nobody remembers it now, and support for a limited set of keyboard shrotcuts. Even at the time, I figured the keyboard wouldn’t make it. “In general I think more people will like typing with a Bluetooth keyboard like Apple’s incredibly tiny Wireless Keyboard,” I wrote. “You’ll just need to use a case, stand, or convenient box to prop up the iPad at a good angle for viewing while you type.” Accessories spawning the need for yet more accessories!

Back in 2010 I was a devoted user of the Kindle, Amazon’s E Ink based reading device, and expressed skepticism about whether the iPad would win me over when it came to reading books. It turns out that I was right, at least about my own preferences. I still haven’t met an iPad that wasn’t a bit too heavy for long-term book reading, and I still read all of my books on a Kindle instead.

That said, I have switched to the iPad for pretty much all other reading, most notably newspapers. While Apple let down the newspaper and magazine industries by forcing individual publishers to build custom apps to display their content—unlike book publishers, who got to generate standard files to be displayed by an Apple-created app—that story has largely played out and most newspapers now have decent apps. I subscribe to four, and keep all of them on my iPad. They vary in quality quite a bit, but when I’m scrolling through headlines while some live video plays from a current news event in the New York Times app, I still like I’m living in the future.

Back in 2010, I was impressed by how Safari on the iPad was a cut above the version on the iPhone, mostly because it gave you a more wide-screen, “real web” experience. These days it’s arguable that phone layouts are actually the real web, but Safari on the iPad has progressed, too, most notably with the new support for desktop-class browsing introduced in iOS 13. Holding an iPad in my hands and swiping through webpages feels like the best way to experience the web, to this day.

I had to chuckle at my complaints about the “disappointing” iPod app built into the first version of the iPad. That app is now called Music, of course, and I still find it disappointing. Somethings never change, I guess. I’m not sure Apple has ever figured out how to use all the screen space on an iPad for the Music app, and now it’s imported some of its same limitations to the version that runs on the Mac.

“iPad as a laptop alternative”

Can you believe it? My review of the first iPad had a section titles “iPad as a laptop alternative.” This is a discussion that’s been with us since the very beginning. I wrote

During the run-up to the iPad’s debut in January, rumors abounded that it would be a device designed solely for the playback of media, be it video, text, or even games. Apple challenged that perception by announcing it had designed iPad versions of its three iWork Mac applications—Pages, Keynote, and Numbers. Throw in the ability to type on an external keyboard, and you got the distinct impression that Apple was trying to make the case that the iPad is a business tool and a true laptop alternative.

Apple’s release of those apps was definitely an attempt to place the iPad in a context that went beyond media consumption, and I’d argue that it was a good start. But Apple lost some momentum on this front until the arrival of the iPad Pro in 2015. “The iPad isn’t going to replace a MacBook Pro anytime soon,” I wrote back then. It still hasn’t, for many people. But it’s closer. And it replaced my MacBook Air a few years back.

It’s not a lawnmower

Even a decade later, so much discussion about the iPad involves what it isn’t, not what it is. It’s not a laptop. It’s not a Mac. It’s not any kind of PC, really, even though it does some of the same things. Apple continues to fan the flames with provocative ad campaigns that say that the iPad is a great computer, and also not a computer at all.

Because the iPad is such a new concept, Apple faces some serious challenges in making people understand how they might use it and why they should buy one. It’s not a product type people are familiar with, like a PC or a phone, or a TV or a lawnmower. It’s neither fish nor fowl, and consumers are pretty comfortable with their chicken and salmon, thank you very much.

After a decade, more people are comfortable with what the iPad is than ever before. It’s got a large and growing base of users. But even after a pretty successful 10 years, it’s still got more work to do to convince more people that it can be taken seriously.