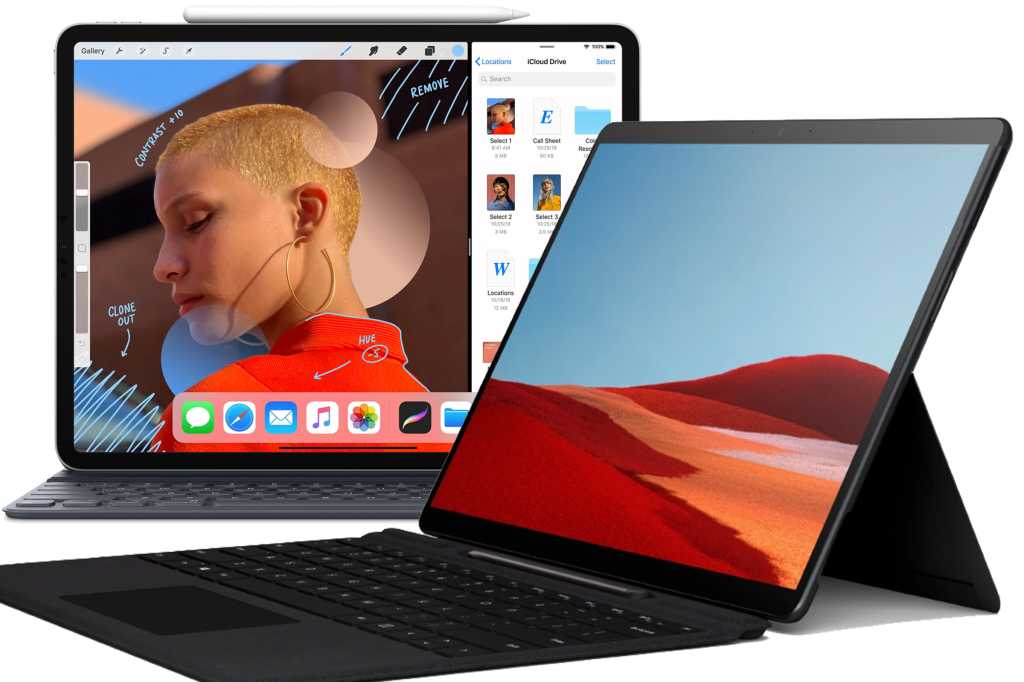 When Apple announced the new Magic Keyboard for the iPad Pro—which features a trackpad that users can use to drive a cursor around on the iPad screen—some pundits pointed out that at long last, Apple was admitting that Microsoft was right after all when it designed the Surface with a keyboard and trackpad.

Except that’s not what happened. With iPad and Surface, Apple and Microsoft are both headed for the same destination—a new kind of computer that is just as at home as a touch tablet, with a stylus, or with a traditional keyboard and mouse. They’re just converging on it from opposite directions.

Go with your strengths

Both Microsoft and Apple are victims of their own success. They both start from very strong positions, but missing key features that you need if you’re going to create a next-generation device that’s flexible enough to be whatever you want it to be.

Apple’s strength is the iPhone, which has transformed the company in terms of size and profits. The iPhone gave Apple a foothold in the next generation of touch-driven devices that Microsoft just doesn’t have, and it used that foothold to create the iPad. Which is great, but the iPad’s the antithesis of the traditional PC.

These two old adversaries stand on opposite sides of the game board, circling, one eye on their opponent and the other eye on the prize in the center: the ultimate converged device. Who can get there first?

It’s easy for Macworld to throw stones at Microsoft, I know. But the fact is, I’ve admired Microsoft’s attempts to break free of its PC legacy over the last decade. The Metro design language was a really clever attempt to add a modern, touch-focused interface. It was a cornerstone of Windows 8.

I remember watching Microsoft preview the new design language at the D9 conference in 2011. And as Steven Sinofsky of Microsoft showed it off, I kept thinking to myself: “Wow, look at Microsoft. They’re going for it. This is a serious competitor to the iPad.” It didn’t try to rip off iOS, like Android was doing back then—it was its own thing, with innovative features like Live Tiles.

But, as I wrote back then, the Steve Ballmer-led company wouldn’t stand by what it had built:

The problem with the announcement is that Microsoft has failed to commit to the tablet as a unique type of device, The company that spent a decade trying to push Windows tablets on a market that just didn’t want them is still convinced that it’s a selling point that Windows 8 tablets will run Microsoft Excel for Windows and if you hook up a keyboard and mouse to them, you can get an arrow cursor and click to your heart’s content… Imagine if Apple had done that with the iPad.

It was a heartbreaking moment when they revealed the classic Windows desktop hiding behind Metro, and a painfully familiar Microsoft Excel running on it. Seriously, was one of the most deflating moments I have ever experienced in a tech demo. Microsoft invented an entire new way to think about using its devices. Microsoft! I had seen what happened when Microsoft realized the internet was important—the entire company shifted gears and within a couple of years they dominated.

But that was Bill Gates’s Microsoft. Ballmer’s Microsoft didn’t have it in them. They immediately undercut all the work they had put into Metro. It was just a layer on top of the familiar. Microsoft wasn’t invested in dragging its users into the 21st century.

It was a decision motivated by fear. Fear that if Microsoft’s customers were forced to move to a new interface paradigm, they might as well buy a Mac or use Android or get an iPad. Fear that Windows wasn’t strong as a brand for any reason other than familiarity. A bolder CEO might have powered through, but Ballmer-era Microsoft always struck me as being timid.

And let’s face it—maybe Ballmer was right. Windows 8 is largely seen as a disaster of a release, and conventional wisdom is that it’s because Windows users rejected the changes that Windows 8 was trying to push at them. Windows 10 became the apology release, one that recognized that Windows had to be a traditional PC first. It turns out, people don’t use Windows because they love it—they use it because it’s familiar, runs familiar apps, and works the way they expect. There’s not a lot of appetite for change in that situation.

The iPad inherited the strengths of the iPhone. People knew how to use it. Apps were readily available. But it also inherited all of its weaknesses—or at least, they’re weaknesses if you’re trying to build a device that can do all the things a computer can.

The iPad had no concept of a file system. The small screen of the iPhone led to most apps being more simple. Multitasking and windowing were foreign concepts. Apple ended up with a popular touch tablet, but one that lacked a clear path to the promised land of being more than that. (Easing the pain was that already had a product for those users—the Mac.)

It’s been a long road. The introduction of the iPad Pro in 2015 showed that Apple was moving in that direction, but it’s taken a long time for the company to try to figure out how to introduce features that provide the power you’d expect from a more traditional PC, but in a way that’s been rethought to work on the iPad. If Apple had just made the iPad in to a Mac, it would be committing the same sin that Microsoft committed in 2011.

But still: Can you use the iPad as a laptop? Could there be a “desktop” iPad? As recently as last month, the answer would essentially be no. The addition of cursor support makes it seem finally possible. Apple is creeping forward.

Meet in the middle

It feels like Apple had a pretty big head start on Microsoft, but iPad development was slow in the early part of the 2010s, as Apple focused primarily on the explosive growth of the iPhone. Still, it feels to me like Apple has the advantage right now. The addition of cursor support in iPadOS 13.4 shows that Apple is getting good at rethinking classic Mac and PC features for the modern era. (This isn’t to say that there isn’t much more to be done. File management on the iPad exists, yes, but it’s a mess.)

Microsoft, meanwhile, is still fighting the fact that its greatest asset is its biggest liability. Windows offers a touch interface, but it’s still secondary. Too often on Windows, you end up with a classic PC interface that’s designed for the precision of a mouse. I feel like under CEO Satya Nadella and Panos Panay, Microsoft is trying to grow and change and drag things along in a way that they weren’t under Ballmer. I’m not convinced about how well they’re dragging their users along, though.

Still, it’s all to play for. Both of these tech giants know there’s something to be had in the fusion of touchscreen technology and traditional PC functionality. Both of them start with strong positions in one area—and weak ones in another. Who will get there first?

My bet’s on Apple, given the speed at which it’s been improving the iPad over the past couple of years. But you can’t count out Microsoft, either. The game’s not over. Who will make the next great move to move the game forward?