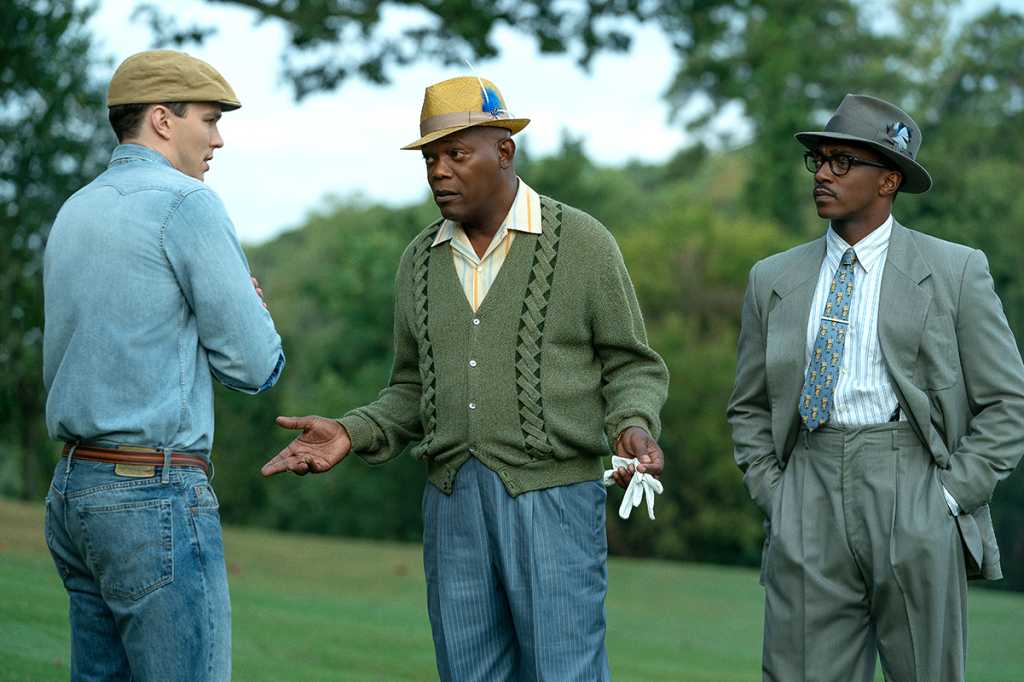 The Banker is a movie that both champions civil rights and the idea that making boatloads of cash through American capitalism is a fine and wonderful thing. Fittingly enough, it’s also one of the first feature-length films from Apple TV+, a service run by a company with near-unimaginable stores of wealth and which often sticks its neck out in support of LGBT and other civil rights. Beyond that, it’s also a good place to deposit a couple of hours of your time, even considering a troubled release schedule that saw it pulled from theaters and the name of the producer—who’s the real-life son of the main character—struck from the credits.

One of The Banker’s big themes is movement, not just for the cash hinted at in the title but also in the context of one’s standing in physical and social spheres. We see this in the character of Bernard S. Garrett (Anthony Mackie), a black man who moved to Los Angeles in the 1950s after realizing that his native Texas lacked fertile ground for his mathematical talents. We see a bit of it in the character of Joe Morris (Samuel L. Jackson), Garrett’s eventual business partner who knows how to move through almost every strata of L.A.’s social scene. And most notably, we see it in the way the pair uses their talents to try to buy buildings that will enable African-American citizens to move into nicer neighborhoods that were once solely the province of white folks. In fact, The Banker is just as much a film about real estate as it is about banks.

Garret and Morris encounter plenty of social roadblocks, even in the comparatively friendly social climate of 1950s and 1960s California. To get around them, they hire Matt Steiner (Nicholas Hoult) to act as their frontman while they pull the strings behind the scenes in an attempt to buy a building that would rearrange the cards in their favor.

It’s here where The Banker’s social commentary is at its strongest—even more so than in the many minutes when it’s painting banks as the gatekeepers of the American dream. To pull off their good-intentioned con, Garrett and Morris end up teaching Steiner all the skills he needs to walk with confidence among the richest tiers of white society, and Steiner’s bumbles through the basics of gold and algebra deliver some of The Banker’s few moments of comic relief. When it’s time to put their plan into action, Garrett and Morris end up masquerading as a cabbie and a janitor while Steiner is dressed to the nines.

The setup slams home the idea that everything we associated with good manners and civility has its roots in privilege and performance. Garrett and Morris already knew the skills they teach Steiner—the only thing keeping them out of the clubs Steiner wanders into is the color of their skin. The problem runs so deep, in fact, that it’s even responsible for one of the film’s strange and unexpected flaws: For a good chunk of a movie celebrating the ingenuity of two black men in the middle of the 20th century, the camera ends up lingering on a white man. When the movie focuses on him in the second half, The Banker loses much of its initial vitality.

But at least he shines while the camera is on him, as does everyone else in this phenomenal cast. Still, Jackson manages to steal the show here, slipping comfortably into a role that seems tailor-made for his quirks and delivery style. If he hadn’t been around, The Banker may have needed a bailout.

For all of its early optimism, The Banker never really manages to convey the excitement the characters experience when they’re scribbling equations on chalkboards of flaunting their knowledge of banking jargon. This story may provide one of the best reasons to make a show about banking—but it’s also a reminder of why banks rarely feature in movies apart from being settings for heists. Even with the strengths of its cast, even with the lovingly imagined 1960s sets, The Banker often feels like it could have been a particularly well-made dramatization on a history program.

The Banker’s importance lies in the ways that it shows the fight for equal civil rights didn’t always involve fiery speeches and defiant marches through the streets of the nation’s largest cities. In some cases, it involved numerals being penciled on slips on papers and money being exchanged in acts of goodwill. It’s also remarkable in that it doesn’t take the easy route and paint banking itself as a bad institution—instead, it strives to show how it can be a gateway to realizing dreams when stripped of arbitrary barriers and untainted by greed. As the final hours of The Banker show, though, that will probably always be a hard sell.