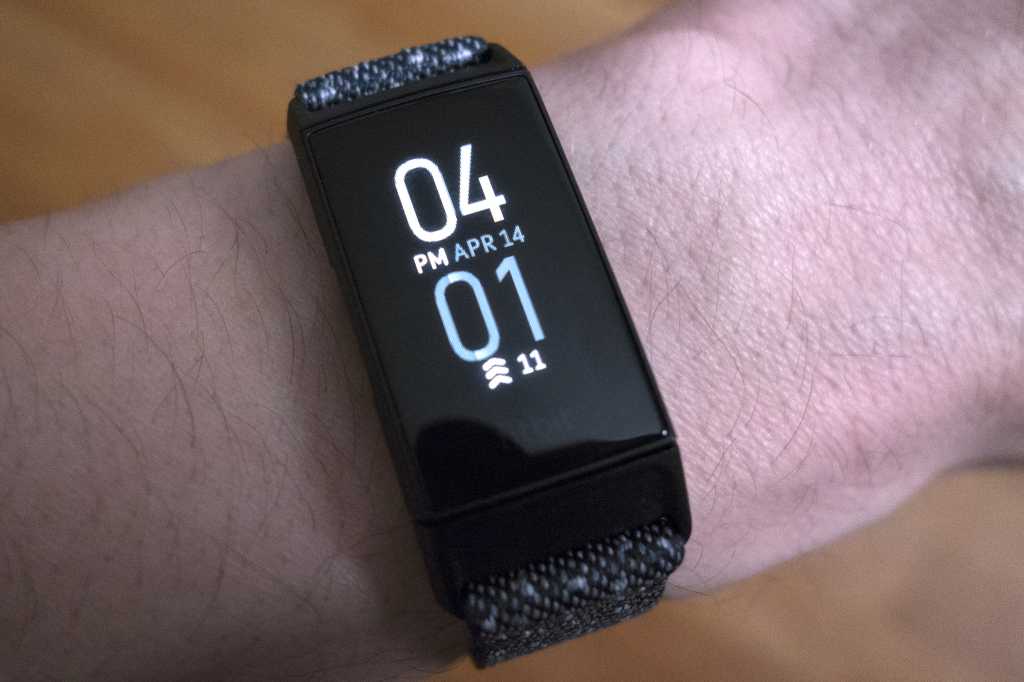 The Fitbit Charge 4 isn’t flashy or classy, but it does what it’s supposed to and looks good doing it.

In a world of smartwatches that can make calls, check heart rhythms, and summon personal assistants, the Charge 4 is something of a throwback. While it’s an improvement over the Charge 3 in many ways, its plastic body, grayscale screen, and giant bezels are a constant reminder that the Charge 4 isn’t an Apple Watch, a Galaxy Watch, or even a Versa for that matter. And with its $150 price tag, it feels like it costs about $25 more than it should.

But if you can get past all that, the Charge 4 is the very best fitness tracker Fitbit has ever made. It’s not just that GPS and NFC chips are now standard—the whole package is smarter and more responsive than the Charge 3. Small, meaningful additions like Spotify controls and a calendar app help bridge the sizable gap between it and a bona fide smartwatch.

There isn’t much to say about the Charge 4’s design that wasn’t already said about the Charge 3. It comes in a new color called rosewood, which is something of a deep red wine mixed with burgundy, but I suspect most people will opt for the classic black color.

The plastic resin case is something of a downgrade over the Charge 3’s aluminum body, but there’s so little of it that’s visible, most people won’t mind (or even notice). Even with the lighter body, however, it’s a touch heavier than the Charge 3 (30 grams versus 29 grams) and slightly larger all around, but for the most part, the Charge 4 will feel about the same on your wrist as its predecessor and way more comfortable than the Charge 2.

The screen is essentially the same as it was on the Charge 3, meaning it has pretty thick bezels and a prominent Fitbit logo beneath the display. The OLED display and dark UI do an admirable job of hiding it, but it’s distractingly apparent when using one of the analog faces.

The band system is the same as well, so all of the Charge 3 straps work with the Charge 4. Some new ones are available at the usual price points ($30 to $50), including several rosewood options to match the new case color. The nicest option is the versatile graphite reflective woven band that you can only get on the SE edition (which also comes with a classic black band for an extra $20), but the lack of an exclusive partnership like the PH5 knitwear bands for the Versa is a bummer.

Smart enough for most people

Setup as always is a breeze, with my phone automatically recognizing the Charge 4 (like Apple does with AirPods) before I even opened the Fitbit app. Notifications, too, seem improved, with alerts opening and clearing instantly on my phone when the respective action is taken on my watch, a hit-or-miss affair on the Charge 3.

Fitbit doesn’t officially divulge what kind of processor powers its smartwatches and trackers, but the Charge 4 feels noticeably faster than the Charge 3. I didn’t experience any of the lag that plagued earlier devices, and swipes and taps felt downright snappy. Battery life is still excellent as well, easily logging a week with normal use. However, Fitbit is still using a pin charger rather than the Inspire’s inductive one, so you might struggle to line it up (as I did).

However, none of the recent accouterments of Fitbit OS on the Versa are here either. That means you’ll need to go to the Fitbit app to change clock faces and you can’t organize the stats on your Today screen. And you still can’t install any new apps on your Charge 4, though you do get two new ones: Agenda, which offers a two-day snapshot of your upcoming events, and a Spotify remote. They work as advertised, but the Charge would certainly benefit from music storage and its own app store like the Versa.

Navigation hasn’t changed, so you’ll mostly be tapping and swiping, with the side button needed for quick settings and Fitbit Pay (via a long press), going back a screen, or returning to the clock face. It’s fairly intuitive, but it’s not without its quirks. For example, if you tap the screen thinking it will dismiss a timer, nothing will happen. And when using the Exercise and Relax apps, pressing the button will pause your workout. In fact, if you leave the exercise screen at all, your workout will stop, which is a bummer if you want to change tracks in Spotify.

As a fitness tracker, the Charge 4 is absolute tops in its field, however shrinking it may be. Not only is it loaded with sensors that track steps, heart rate, and elevation, it’s also the only Fitbit device other than the aging Ionic to measure distance, thanks to a new GPS sensor on board.

GPS tracking works with seven exercise activities, including running, biking, and walking, but since there’s no third-party app support, you won’t be able to seamlessly hook into a service like Strava. But even if you’re content to just use Fitbit’s own app, GPS can take a bit to lock onto your location when a run starts, but it did well to track my distance and pace, as well as my altitude.

However, using GPS tracking will quickly deplete your Charge 4’s battery. After about an hour of using it on a long walk, my Charge 4 lost roughly 20 percent of its battery life. But that won’t be an issue unless you’re an avid runner. GPS will only activate once you start an exercise, so it’s effectively dormant even when turned on in the settings. So while GPS is a nice spec sheet addition to the Charge 4—and a sign that Fitbit will be bringing it to the Versa later this year—I suspect it won’t matter all that much to most people.

What will matter is Fitbit’s new Active Zone Minutes, which takes Fitbit’s fitness gamifying to new levels. Based on the American Heart Organization and World Health Organization’s joint recommendation of “at least 150 minutes of moderate-intensity activity or 75 minutes of vigorous activity, or a combination of both, each week,” your Charge 4 will alert you when you’re working toward your goal. You’ll get distinct buzzes for when you enter fat burn, cardio, and peak zones, and a new section on the Today screen will track your daily progress.

It’s a fantastic addition to Fitbit’s already excellent fitness arsenal, and it makes the Charge 4 a truly top-notch tracker, even without a proper screen. Active Zone Minutes will be coming to Fitbit’s other trackers, but not the Charge 3.

Sleep tracking is also predictably excellent on the Charge 4, made even better with the addition of a daily Sleep Score on the Today screen. Using the heart-rate and Sp02 sensor, Fitbit calculates a sleep quality score to help you get a clearer picture of your night’s rest. You can even schedule a Sleep Mode for your watch, which will dim the screen and turn off during the night. And Smart Wake, which gradually wakes you up before an alarm based on your sleep cycle, is coming soon. Sleep tracking remains Fitbit’s greatest strengths—the Apple Watch and most other smartwatches don’t even offer it natively—and it’s one of the best reasons to buy a Charge 4.

Should I buy a Fitbit Charge 4?

If you’re looking for a fitness tracker that’s small, lightweight, and comfortable but still has a decent amount of smarts, the Charge 4 isn’t just the best option, it’s really the only one. It’s $50 more than the Inspire HR, but the addition of an altimeter, Sp02 sensor, NFC, and GPS makes it well worth the extra money.

I can’t help but wish the Charge 4 was $125 instead of $150—especially since the Versa Lite is just $160—but if you’re patient, you’ll be able to get at or near that price soon enough. If you can get it on sale, that’s just a bonus. The Charge 4 might not be flashy, but it’s a dependable tracker that does what it’s supported to do—keep you healthy.