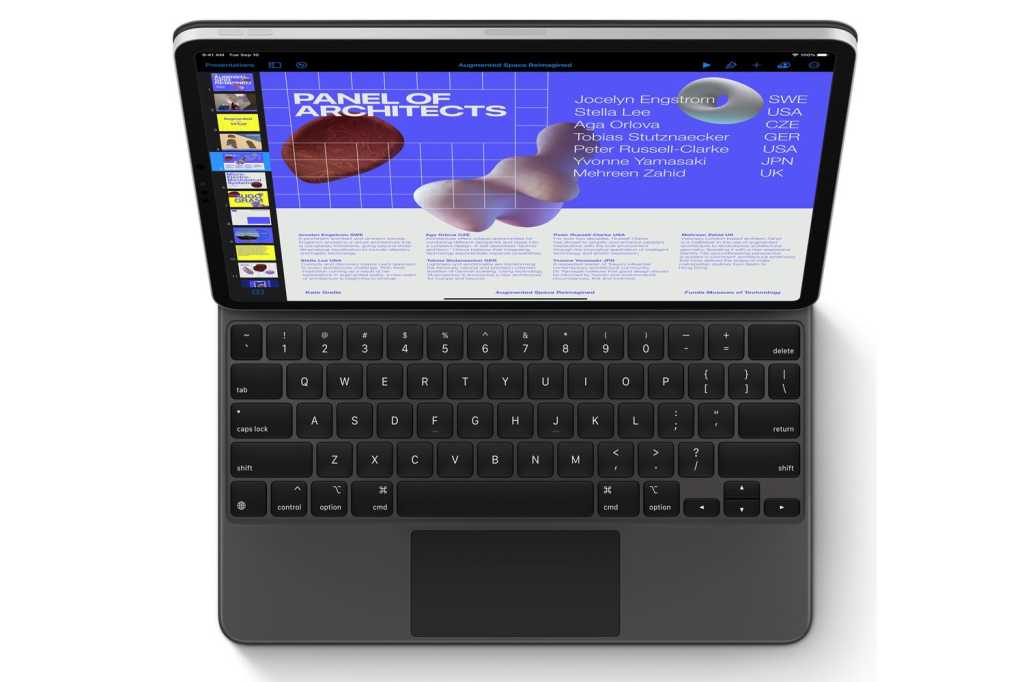 When Apple announced the new Magic Keyboard for iPad Pro, it decided to play coy about how much it weighed. The result is that, despite some accurate speculation, none of us found out for sure until this week when the first keyboards arrived in the hands of reviewers and customers. And so, during the midst of our global isolation event, we were all spared a couple of weeks of bad takes from tech pundits. Alas, those days are now over.

But I’ve got good news! While the Magic Keyboard for iPad Pro does indeed make an iPad Pro weigh as much as a laptop, you only have to buy one if you want to use your iPad that way. It’s your choice—and that says it all about the iPad’s greatest appeal.

Weighs as much as a laptop

This is a revelation that will come as no surprise to those of us who have been using the iPad with heavy laptop-style keyboard cases for the last few years. When I’m sitting in my backyard writing on my iPad Pro with a Brydge keyboard attached, I’m essentially working on a 13-inch laptop, and it weighs just as much as you’d expect.

But these specs legitimately break some people’s brains. This is because they’ve made the mistake of classifying the iPad as a lesser sort of device, a compromise that people only use because it offers something the Mac can’t. The moment that the iPad begins to approach the Mac’s domain, those people get defensive. “Why don’t you just use a MacBook Pro,” they say. (I’ve heard that one an awful lot over the years.)

There’s a lot to unravel there. As I wrote last month, “What makes the iPad great is its ultimate flexibility.” Yes, I choose to use an iPad in part because I’ve built up a collection of apps and Shortcuts that let me do my job. But I also choose to use an iPad because it can so quickly transform into other devices. My “laptop” can also be a (relatively) lightweight tablet, or can turn into an audio editing workstation that I control via an Apple Pencil. Or I can clip it into a desktop stand, attach a USB keyboard and Magic Trackpad, and make it into a tiny iMac. The iPad’s whatever shape I want it to be—while still being itself.

There’s a reason Apple’s videos about the Magic Keyboard always show someone grabbing the iPad with one hand and walking away with it. That’s the killer feature. That’s what separates it from every Mac laptop. It’s a laptop— until the moment you decide you don’t want it to be that anymore. And then it’s not.

Not everyone wants a laptop

But part of being flexible means that not every use case is going to work for every user. One of the most perplexing things I’ve seen in my years of covering Apple is the tendency of some people to get irrationally angry when Apple makes a product that they’re not interested in buying. (The reaction to the 12-inch MacBook was… something else.)

With products like these iPad Pro accessories, I’m perplexed that anyone would view them as anything but optional parts. I realize that we’re not used to viewing an Apple product as a system of interconnected components, but that’s what the iPad Pro has turned into. It’s a powerful touch-based tablet with a collection of accessories that Barbie herself would be envious of.

And that’s okay, just like it’s okay if you don’t buy an Apple Pencil. The Apple Pencil is a spectacular tool for some users, and a complete waste of money for others. This is where the iPad Pro is today. A core product surrounded by an array of optional accessories. If one of them doesn’t work for you, keep moving—there’s probably an alternative out there.

Once you start to think of the iPad Pro as the naked robotic core at the center of a system of accessories that you can use to shape the way you use the device, the possibilities start to open up. Apple’s accessories will always be at the center, but third parties will keep building stuff that pushes the envelope. If iPadOS 14 adds full external-display support, iPad docking stations won’t be far behind.

And who knows? Maybe Apple will push iPadOS in even stranger directions going forward. I would never have guessed we’d be sitting here in the spring of 2020 talking about an Apple-designed laptop case for iPad Pro including a trackpad with full native pointer support, but here we are. This feels like a story that’s only just beginning.