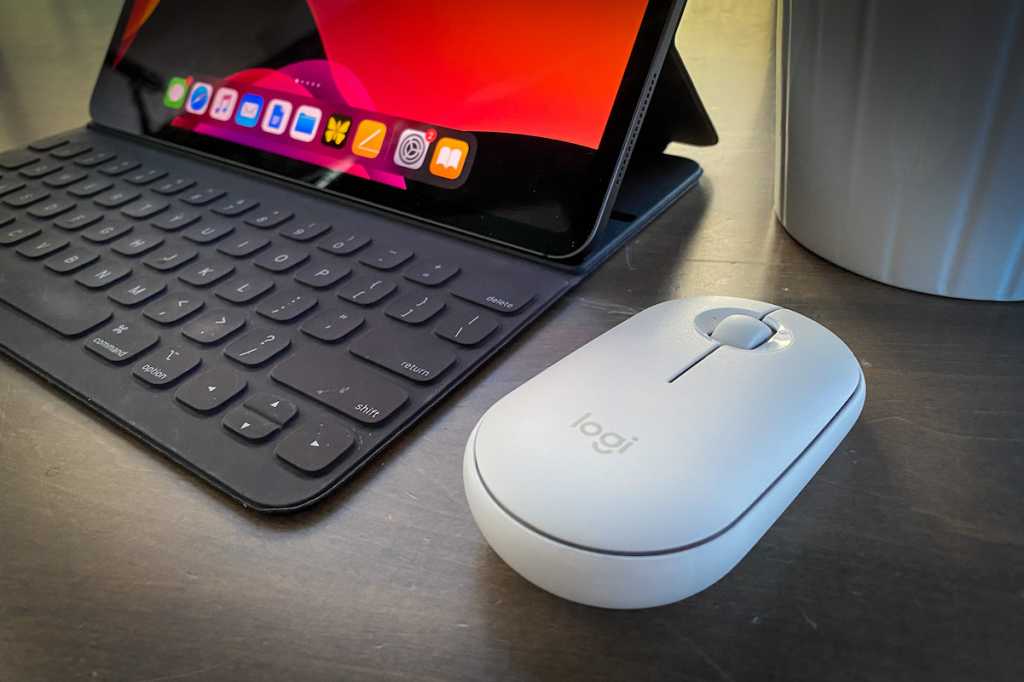 The Logitech Pebble i345 Bluetooth mouse may have been made specifically for the iPad, but in truth it’s not all that different from the catch-all Pebble M350 Logitech released last year. The main difference from that model is that Logitech took one feature away while keeping both models at the same price.

But I wouldn’t hold too much against it on that account. The Pebble i345 is portable in a way that reminds me of Apple’s own pocket-friendly Magic Mouse, yet it offers just enough extra functionality to make it better suited for the iPad than anything Apple itself currently offers.

Available in white and graphite, the Pebble i345 looks comfortable alongside an iPad even if it lacks the sleek elegance of Apple’s own mouse. Unlike the partly metal Magic Mouse, it’s made from a lightweight matte plastic, which leaves me wondering how well the white model will resist smudges over the course of the coming months.

The Pebble i345’s appeal lies mainly in its size. As it’s roughly the same size and shape as a Magic Mouse 2, it does look a bit like a large beach pebble, and it slips neatly into a jeans pocket. This is true even with its 1.04-inch bulge for the palm rest that makes it easier to handle over long sessions. The Magic Mouse has slightly less depth at 0.9 inches.

Why not just get a Magic Mouse? For starters, the Magic Mouse 2 costs anywhere from $79 to $99 depending on the color while the Pebble costs only $29.99. Compared to the Magic Mouse 2, the Pebble i345 is also significantly quieter. With normal office noise, I doubt anyone aside from the user could hear it.

But there’s an even better reason: The Pebble i345 features a clickable scroll wheel in addition to its tactile left and right mouse buttons. This is already a step up over the Magic Mouse since you can’t actually use that device’s scroll function on an iPad, and the scrolling seems better than it does on other third-party mice. Out of the box, the middle mouse button only performs basic clicks, but you can configure it to, say, go back to the Home screen by tinkering with the Accessibility panel in the Settings menu.

The Pebble i345 works almost immediately after pulling it out of box, requiring no more setup than peeling a bit of plastic off the included AA battery and then pairing the mouse with your iPad through the Bluetooth menu. Even better, the Pebble i345 starts trying to pair the second you plop the battery back in place, so you may not even have to hold down the pairing button on the underside.

Here’s where we run into the main difference from the M350. With that model, you could pair the mouse to a device with either Bluetooth or an included USB dongle, but with the Pebble i345 your only option is Bluetooth. Why? Ostensibly, because the iPad had no place to insert such a receiver—unless, of course, you use a dongle with a dongle. Fair enough, but that laughably minor difference in design drives home that the Pebble i345’s existence may be nothing more than SEO-driven marketing aimed at all the people buying mice for their iPads for the first time.

The Pebble i345 certainly worked fine with many other devices. I paired it with my MacBook, and the only option I missed over my Magic Mouse was the ability to perform sideways scrolling. I paired it with my Windows gaming PC, and it worked fine. The only thing it didn’t work great with was my iPhone: I could get it to pair, technically, but I couldn’t do anything with it beyond that. Bummer.

It’s a good mouse, though, regardless of which device you’re using. The 1000 dpi optical sensor allows for fluid tracking, and Logitech claims you can eke 18 months of battery life out of its single AA battery “based on your use.” I have a feeling mine would run out before that.

The Logitech i345 may work fine with other devices, but its size and options make it well-suited for the portability expected from a device like the iPad Pro. The plastic build quality isn’t astounding, but its weight, price, button options, and ease of pairing do much to soften that drawback. I even like it so much that I’m tempted to start using it with my MacBook.