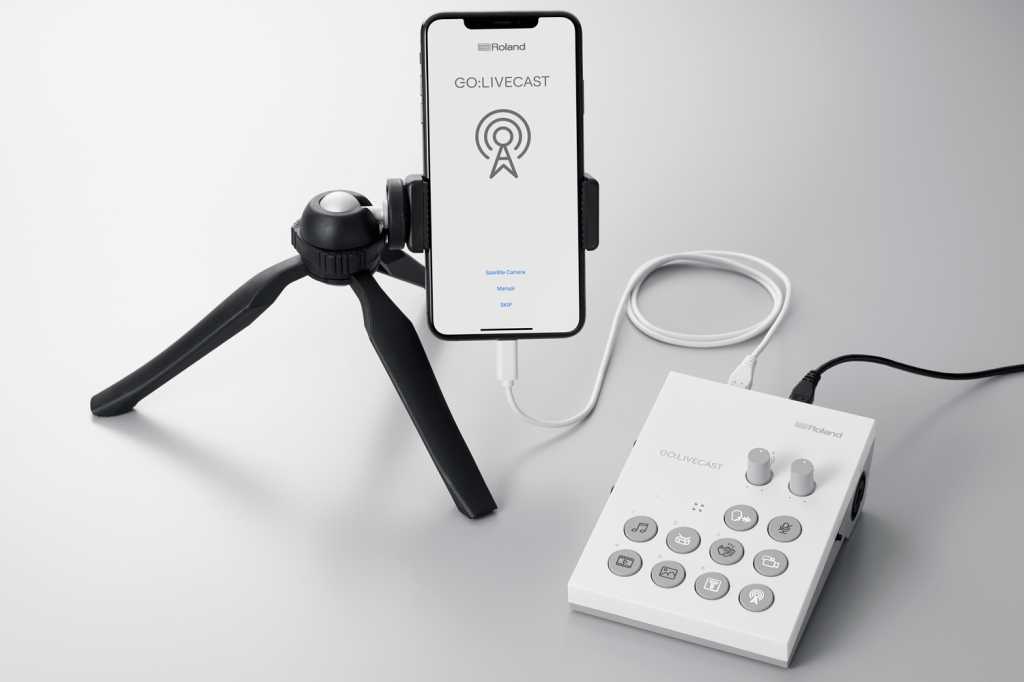 Roland
At a Glance

Even before COVID-19 disrupted our daily routines, live streaming was already all the rage on social media. With little more than a mobile phone and internet connection, almost anyone can broadcast messages in real time to a worldwide audience.

Of course, professionals know there’s more that goes into making a live broadcast than that—good sound, for example, will always make seasoned veterans stand out in a crowd of amateurs. If you’re looking to step up your live streaming game, there’s a new product to help you do just that.

Billed as a “live streaming studio,” Roland Go:LiveCast combines diminutive 5.4 x 4.2 x 2.0-inch hardware with a mobile app that helps make broadcasts sound and look more professional. Rather than using less-capable hardware built into iPhone or iPad, Go:LiveCast allows streamers to upgrade to a higher-quality external microphone with XLR or 1/4-inch connectors through a combo jack on the side of the unit.

Better yet, a switch provides DC 48V phantom power for the type of condenser mics preferred by professionals, including the iconic Sennheiser MKH 416-P48 shotgun model I used for testing. Although few live streamers might invest upwards of $1,000 into such equipment, nearly any external mic will provide better results than typical smartphone hardware. I noticed a huge improvement in audio quality the moment my external mic was plugged in.

A knob on top of the unit controls main mic input level, while a pair of volume knobs on the left side do the same for dual 1/8-inch stereo audio jacks: one for monitoring broadcasts via headphones or speakers, another for line-level input from a keyboard, MP3 player, or other source you might add to the mix. (An internal mic is also built into the unit for those who aren’t ready to invest in an external mic.)

Audio quality isn’t the sole reason to invest in Go:LiveCast. The hardware and app offer several ways to enhance any livestream. The free app includes a real-time “beauty” filter intended to enhance your skin tone, but the results were too garish for my tastes. There are also dedicated buttons for muting the external mic, as well as adding a subtle reverb effect to make your voice sound more live.

Likewise, the top three numbered pads allow broadcasters to trigger background music and dual sound effects. The app features a variety of built-in choices—audience applause and drumroll are enabled by default—but only the music button allows you to add existing tracks from your device library. (Not surprisingly, DRM-enabled tracks cannot be imported.)

The bottom three numbered pads are used to display a short video, still image, or title over what’s being captured from your iPhone or iPad camera. Once again, there’s a decent selection of graphics included, but you can add custom content from your Photos library too. Last but not least, there are buttons to add video and audio from a second smartphone or tablet on the same Wi-Fi network (either as a second camera or for split screen), and to initiate a live or recorded broadcast.

In addition to connecting a mic, headphones, and external audio source, Roland Go:LiveCast requires 5V power via USB Micro-B to Type A cable (adapter not included), as well as a Lightning to USB Micro-B connection to the iPhone or iPad controlling the broadcast through the free app. Both cables are in the box, but they’re quite short—a potential complication for some setups, especially when the latter is a proprietary cable that can’t be easily replaced or extended.

Although Go:LiveCast is a little overpriced considering the flimsy plastic build (the unit weighs just six ounces without cables!), Roland has otherwise done a decent job with the hardware. I do wish the unit provided enough power to charge a connected iPhone at the same time, and placing all cable connections on the back would have been a nice touch.

The mobile app doesn’t quite live up to expectations, with some of the same UI clunkiness noted in my review of the company’s 4XCamera Maker app. One example is the built-in titler, which doesn’t allow users to simply move text anywhere on the screen—options are instead limited to top, middle, or bottom with left, center, or right justification. Assigning clips to the aforementioned pad buttons also tends to be more cumbersome than it should be.

Broadcast options are similarly handicapped, with Facebook Live limited to public, all friends, or private livestreams with no support for custom audiences; likewise, you can’t use Instagram, multiple Facebook logins, or stream from pages, which eliminates Go:LiveCast as a potential tool for small businesses.

Despite the half-baked mobile app and a retail price higher than many potential buyers can afford, Roland Go:LiveCast otherwise delivers on its promise of improving your livestream.