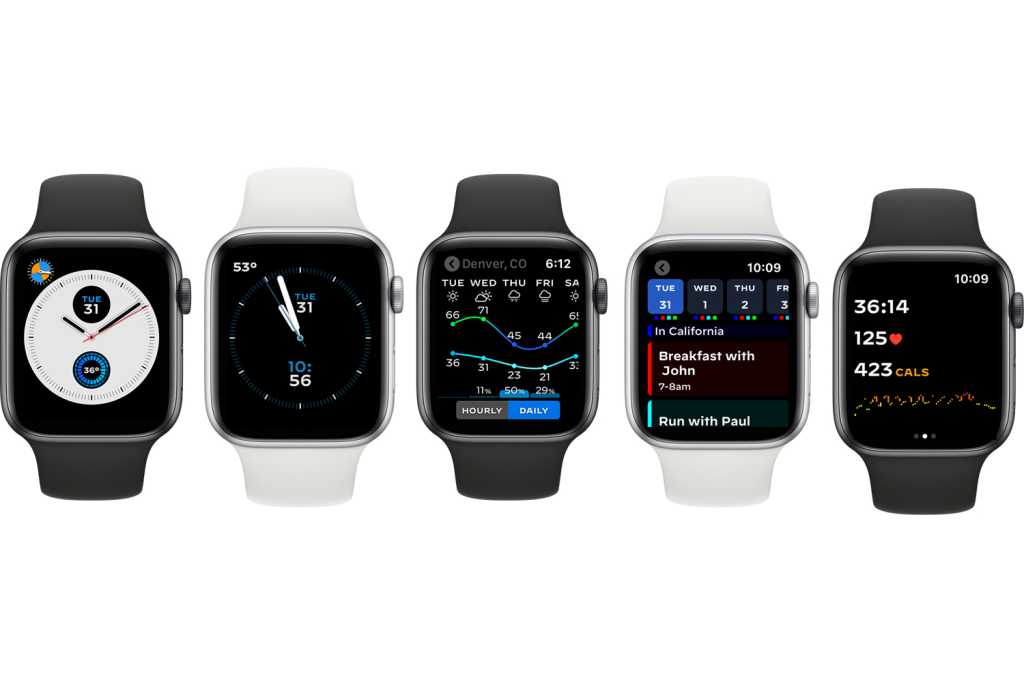 Smartwatch owners love being able to customize the appearance of the Apple Watch face. With just a few taps on the screen or rotations of the digital crown, no two wrists look the same. But in typical Apple fashion, that personalization stops just short of perfection, since there’s no way for developers to create truly unique third-party watch faces of their own.

Instead, Apple Watch lovers must rely on an extensive battery of complications to populate favorite watch faces with data relevant to each person. For those looking to go beyond this limitation, there’s now an ingenious app designed to automatically display a wide range of complications on a given schedule throughout the day. It’s the closest we’ll likely come to custom Apple Watch faces.

Watchsmith is a clever iPhone app that allows Apple Watch owners to change what information gets displayed from its supported complications, and when such data will be updated. In total, there are 43 different source options supported across 10 category styles: Date, Time, Calendar, Activity, Weather, Tides, Astronomy, Timezone, Battery, and Blank. (The latter provides a way for users to effectively “remove” a complication entirely by replacing that part of the screen with solid black instead.)

Along with a number of variations like Meridian and California, there are currently six core watch faces Watchsmith is capable of working its magic on: Infograph Circle, Infograph Corner, Infograph Top, and Infograph Large for Series 4 and 5 models only, as well as Modular Small and X-Large, which also work on Series 1, 2, and 3. As the owner of an Apple Watch Series 3, this was initially somewhat of a disappointment, but thankfully Modular Small is our preferred watch face anyway. (The developer plans to introduce support for other watch faces in the future.)

Everything is configured from the iPhone app, where you are first presented with a list of available watch faces, along with thumbnail images denoting which complications can be customized. As changes are made, they appear on a horizontal timeline relative to the daily schedule you’ve configured. When the scheduled time arrives, Watchsmith replaces the default complication with one of your choosing—perfect for those with a similar routine each day.

To get started with Watchsmith, select a watch face you wish to personalize. The default complication is positioned at center, surrounded by a 24-hour analog clock used to determine when additional styles will be displayed. New complications are added by tapping the plus button, selecting a desired style, then adjusting start and end times.

Should you wish to keep the same length but change which hours a complication is active, simply tap, hold, and move that block to any unoccupied space on the clock dial. There can be as many different entries as there are hours in the day, although it’s hard to imagine who might want to see a complication update 24 times between each sunrise.

For any of the Infograph styles, Watchsmith can also change the color of the background, as well as top and bottom data. Modular Small and X-Large watch faces aren’t supported since monochrome colors are dictated by watchOS, but any style with text also offers the option to change typestyle from six available fonts. (Note: The app requires watchOS 6 or later.)

Despite primarily being geared toward personalization, Watchsmith has another trick up its sleeve. Tapping on any of its complications opens the watchOS app, which doubles as a handy dashboard with seven color-coded shortcuts for accessing Workouts, Weather, Health, Calendar, Astronomy, Games, or Timezones.

While few of these mini-apps are as full-featured as standalone solutions, they’re still pretty good and conveniently implemented. (One of two included games, Bounce is simply Pong in a circle, but quite addictive nonetheless.) Best of all, most of Watchsmith’s features are free—only those requiring data from outside sources (currently Tide and Weather) require a recurring Premium subscription priced at $2 per month or $20 annually.

As versatile as Watchsmith is, there are one or two things it can’t do because of watchOS limitations, such as add multiple copies of a single complication type to the same watch face. (The app won’t prevent you from doing this, however. You’ll just wind up displaying duplicates of the same data.) Other features I’d like to see implemented in future updates are support for HomeKit shortcuts, Music controls, and Walkie-Talkie, all features I use on a regular basis, but not enough to dedicate precious complication resources to them.

Although not quite the same as having real third-party watch faces, Watchsmith definitely makes the experience of owning an Apple Watch more fun, especially if you prefer a more customizable experience and own one of the most recent models.