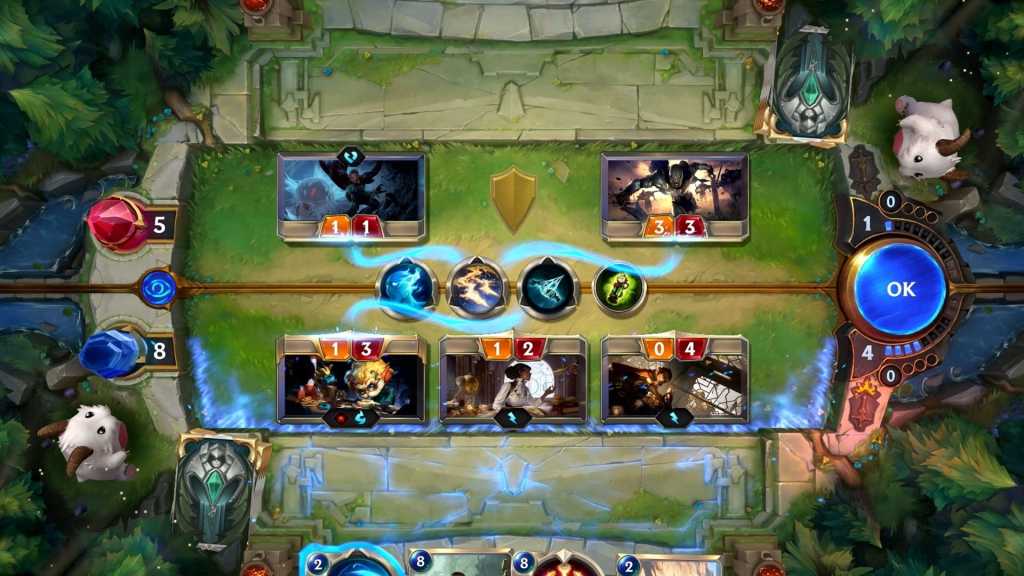 Image: IDG
At a Glance

Riot’s card game takes the League of Legends universe in a whole new direction with smart design, a fantastic interface, and loads of personality. Easy to get into, but as deep as you like.

For the longest time, the collectible card game genre was dominated by Magic: The Gathering (MTG). When Blizzard released Hearthstone in 2014, it brought the company’s signature polish, simplicity, and personality to the digital realm and became an instant smash hit.

There have been lots of attempts to make hit card games before and since, some of them better than others, but nothing has felt like it really understands what makes either of those games truly great or what it would take to dethrone them.

Riot Games is famous for its esports smash hit League of Legends (LoL), and I honestly didn’t expect it’s LoL-themed card game Legends of Runeterra (LoR) to stand a chance of out-Blizzarding Blizzard. But I think perhaps it has.

Simple, deep, and full of personality

Blizzard’s games are outrageously successful because they are, by design, streamlined and simple enough for anyone to learn, while still providing enough complexity to sustain high-level competitive play. Combine that with welcoming technology that doesn’t need a high-end computer or game console to run well and fantastic art direction, not to mention slick interface design, and layer everything with loads of personality.

It sounds so simple, but of course producing a game that nails all of those aspects is rare. I wouldn’t have expected the maker of hyper-competitive and somewhat inscrutable League of Legends to do such a fantastic job on all fronts, and yet Legends of Runeterra delivers in spades.

Much like Hearthstone and many other digital card games, the general game flow is somewhat simpler than physical games like Magic: The Gathering. LoR follows most of those simplification innovations—players have a single resource (mana) instead of multiple “colors” that automatically escalates as play progresses, cards don’t “tap” and become unusable, the rules about which players can play which cards are simplified, and so on.

But LoR is decidedly more complex than Hearthstone. You can play more cards during your opponent’s turn, and respond to their own spells with spells of your own. This back-and-forth, “last-in-first-out” chain of events is part of what makes MTG so strategically deep and rewarding, and LoR delivers more of it than Hearthstone.

Of course, more back-and-forth play and the ability to respond to your opponent with your own spells also makes a card game more difficult to learn. LoR’s fantastic interface is loaded with small touches to make everything clear. Cards you can play are highlighted. Selecting a card brings up a large version of it along with all other cards and effects it can produce. There’s a tooltip for every single keyword that explains it.

You can tap an “oracle’s eye” on the left of the play board at any time to show a preview of how the current chain of events will shake out…which creatures will die or be removed, how much health everything has, and so on. Every effect or spell forms a simple left-to-right chain in the middle of the board, with wispy tendrils stretching to their targets.

Riot gives you a host of short “challenges” to tackle in lieu of a tutorial. Each one sets up a specific challenge against an AI opponent with a particular win condition—an easy puzzle that is meant to teach the player a specific play rule, mechanic, or card keyword.

Rarely have I seen a game do such a good job of providing clear contextual clues as well as explicit detailed information, all without getting in the way of play. Simple flourishes like the auto-pass feature keep the game moving along.

I’m not really up to date on LoL lore and characters, but fortunately none of that is required to enjoy LoR. Fantastic card art and spell animations, heaps of interactive dialogue, and big hero animations make the game pop with personality. Just as Hearthstone introduced the World of Warcraft setting to a whole new group of gamers, LoR will teach newbies about the League world Riot has built up over the last decade.

There are a million free-to-play games out there. But most of then are only free in name. In order to really get anywhere, you need to start shelling out money. Many of the more predatory F2P games will have you kicking out real dollars for gems or whatever month after month.

Legends of Runeterra lets you spend real money to buy coins, and then spend those coins to buy cards or cosmetic stuff like card backs or emotes. But you really don’t have to. As you play you earn XP for one of the game’s eight regions (switch at any time) and build up a weekly “vault” full of cards and such. The game is exceedingly generous in providing totally reasonable starter cards and lots of ways to keep earning cards.

If you want to fire up the game, copy a competitive tournament deck, and rocket your way up the ranked charts, you’re going to have to spend money, sure. But you can legitimately play for free, building and playing fun decks and constantly expanding your collection, all without spending a dime. It takes less than an hour a day to knock out your daily quests and build up a big weekly vault of new cards, unlocking lots of great new stuff for your chosen faction along the way.

The iOS app works great on both iPhone and iPad. On a phone screen, text is necessarily a little hard to read at times, but the overall card details are big and bold enough to play without compromise, especially once you know the game well enough that you don’t need to look up card details anymore. The bigger iPad screen affords a lot more playable space.

If I have to gripe about anything, it’s that there is no Mac app. Your account will sync between iOS and Windows clients, but there’s still no word on the game ever coming to Mac. With such a nice iPad client, it seems a shame not to make it a Catalyst app, especially since the game is lightweight enough to play really well even on an old MacBook Air.