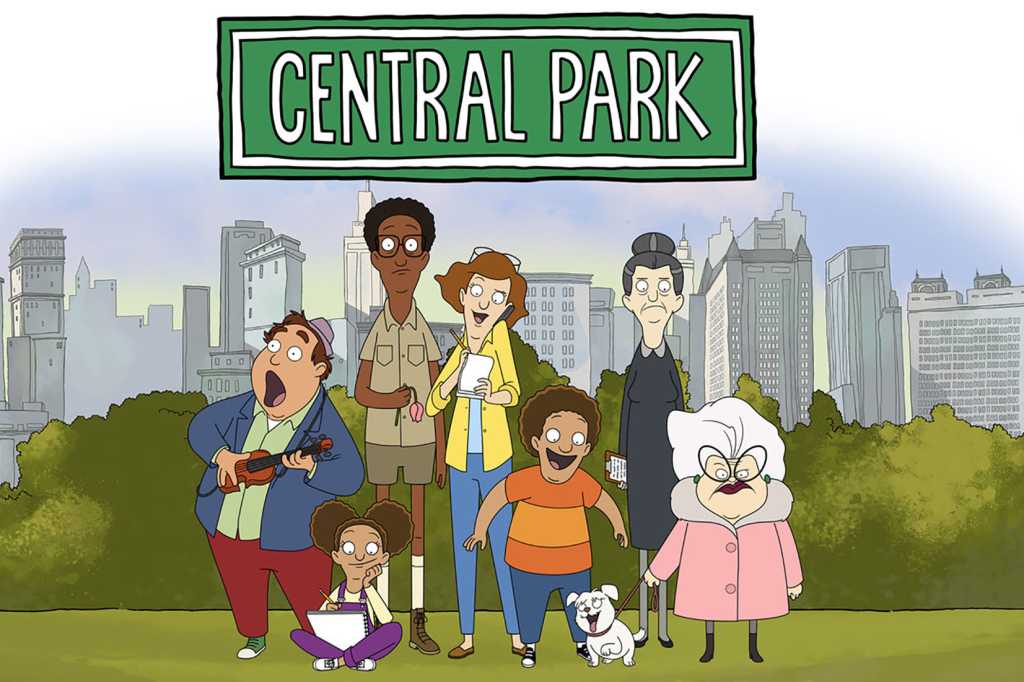 Central Park isn’t the first animated series on Apple TV+ (the service launched with a set of Snoopy in Space shorts), but it’s the first one made for adults as well as kids. It’s got all the ingredients for a hit show: it’s from the creators of long-running hit Bob’s Burgers, it’s got incredible voice talent including Kristen Bell, Josh Gad, Stanley Tucci, and Tituss Burgess, and it’s about something basically everyone is familiar with, the most famous park in the world.

The first two episodes became available on May 29, and if they any any indication of what we can expect from the rest, I’ll only watch reluctantly. All the pieces are there, but the show as a whole is not the sum of its parts.

Where some shows (like cousin Bob’s Burgers) have a few musical numbers here and there, Central Park builds the show around them.

They’re good enough for TV fare. The stars all sing well, but sometimes a little too well. You can really hear the “trying real hard” and it doesn’t feel natural coming out of a set of characters that are meant to be relatable everyday people.

The productions vary in scope. The “Own it” number from the first episode feels like a high school musical production, with its lone drumkit and banging-piano-cord backing track. The funky “Do it while we can” skating number that closes out out the second episode has a lot more going on, both visually and musically. The songwriting is better than fair, but most songs trend to a modern musical theatre style. You can be a music-lover and still just not appreciate the style on offer here. Even the rap number is a “musical theatre” rap number.

Musical TV shows rarely seem to take off. It’s hard to maintain the sort of quality we’ve come to expect from a Disney movie across 8 to 10 episodes a year, and Central Park probably does about as well as anyone could expect. But you have to be into musicals to tolerate the constant breaking-into-song. The songwriting isn’t edgy, or funny, or full of spectacle enough to win over converts.

Central Park is supposed to be a comedy, but if you didn’t tell me that, I wouldn’t have labeled it such. There are a few mild chuckles, but the characters aren’t nearly cartoonish enough to land any belly laughs. Worse, half of the main characters seem to have the same defining character trait: Look how frantic they get!

Most disappointing is the street busker Birdie, because there’s so much potential there. Josh Gad gives a great performance and the character is ripe for great one-liners that never materialize. Instead, he’s used as a fourth-wall-breaking narrator that is, after the first few minutes of the first episode, totally unnecessary. Nothing is really gained from the show’s constant cuts to Birdie in which he would either summarize what we just watched or spoil what we’re about to watch.

I can’t help but think the time devoted to multiple musical numbers per episode leaves little breathing room for laugh-out-loud moments. If the songs themselves were funnier, it would work.

Give it time to grow

Central Park is trying to do a whole lot in each half-hour episode. Several toe-tapping musical numbers, juggling half a dozen goofy characters (maybe not goofy enough), comedy, an overarching “buy the park” plotline…

Just as one can’t plant dozens of trees and plants and expect a park to spring up in a week, these multiple facets aren’t all going to flower in just a few episodes. Big fans of musicals will probably enjoy the show—there’s not a lot else like it on TV. Bob’s Burgers fans will be disappointed that the show isn’t a lot funnier with more eccentric personalities. But we would do well to remember that Bob’s Burgers had a bit of a rocky first season, too.

Central Park has plenty of room to improve, but it’s got the cast and production values necessary to get it there. It could use a little more edge, a lot more humor, and characters that do more with their cartoonish nature. Musical superfans will be delighted, but there’s not enough there yet for everyone else to latch on to.