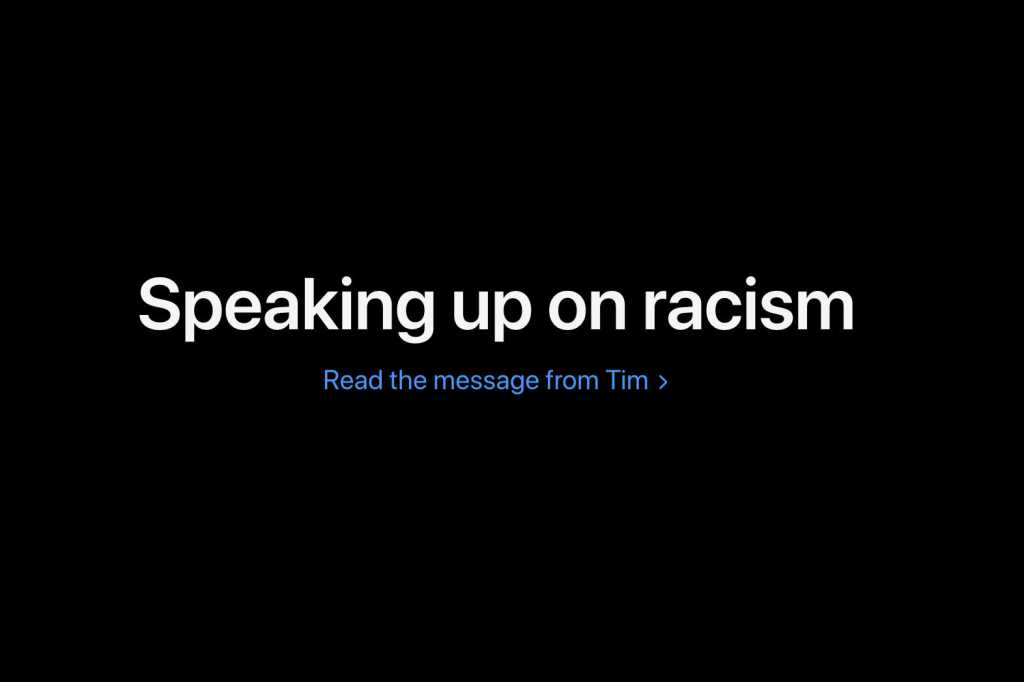 On Thursday, Apple CEO Tim Cook released an open letter to address the current unrest due to the killing of George Floyd. A link to the letter, titled “Speaking up on racism,” occupies the top promotional spot on the Apple.com homepage.

The letter acknowledges the “senseless killing of George Floyd” but is primarily concerned with the longer history of racism and the way it is, in Cook’s words, “still present today—not only in the form of violence, but in the everyday experience of deeply rooted discrimination.”

Cook’s statement comes on the heels of many such letters from corporate brands and their leaders. Compared to most of them, the statement from the CEO of the most valuable company in the U.S. is fairly modest (it certainly lacks the verve and specific calls to action of the statement from Ben and Jerry’s, for example). It acknowledges both the current firestorm and the larger systemic issue, while mentioning donations to “organizations like the Equal Justice Initiative.”

But Cook doesn’t call out any particular people or organizations by name, save for mentioning George Floyd and the donations to the Equal Justice Initiative. It does not call for any particular legislative or policy changes, nor does it commit Apple to any specific action to which it could be held accountable other than making monetary donations.

Rather, Cook offers the following rather vague corporate commitments:

But we must do more. We commit to continuing our work to bring critical resources and technology to underserved school systems. We commit to continuing to fight the forces of environmental injustice—like climate change—which disproportionately harm Black communities and other communities of color. We commit to looking inward and pushing progress forward on inclusion and diversity, so that every great idea can be heard. And we’re donating to organizations including the Equal Justice Initiative, which challenge racial injustice and mass incarceration.

The letter closes with a quote from Martin Luther King: “Every society has its protectors of status quo and its fraternities of the indifferent who are notorious for sleeping through revolutions. Today, our very survival depends on our ability to stay awake, to adjust to new ideas, to remain vigilant and to face the challenge of change.”