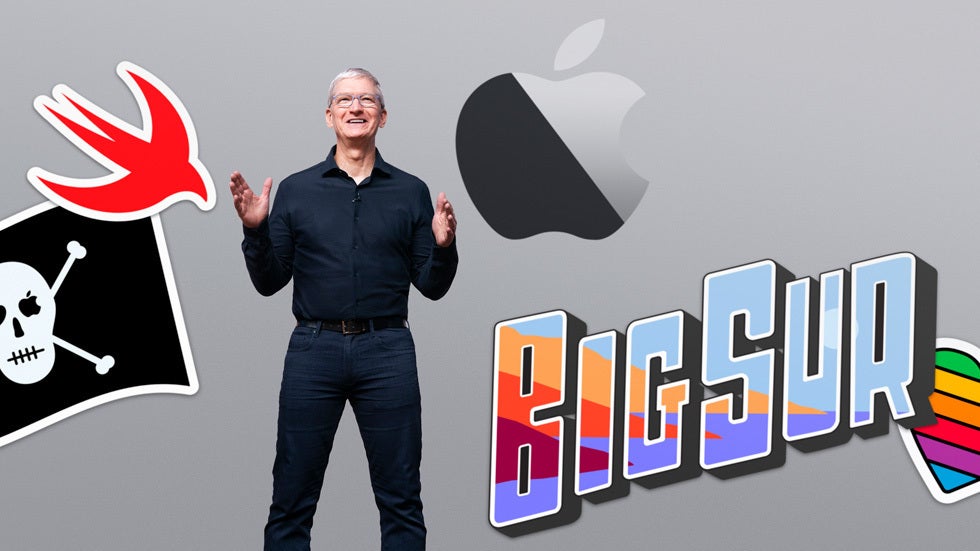 Apple’s Worldwide Developers Conference is completely online this year, but that doesn’t mean the company held back on its announcements. Since there was no live audience to interrupt the keynote with applause, hoots, and hollers, Apple covered a ton of ground at a brisk pace during its two-hour presentation on Monday. You can watch the keynote in its entirety online, but if you don’t have the time, you can find out what happened in our summary right here.

It’s been rumored for a while, but Apple’s announcement that it will switch from Intel processors to its own silicon was the final segment of the keynote, saving the biggest news for last. Apple CEO Tim Cook said that Apple has planned for a two-year transition, with the first ARM-based Mac coming later this year.

Apple has a kit available for third-party software developers to create software that can natively run on ARM-based Macs. The company also revealed Rosetta2, technology that will allow users to run software originally created for Intel-based Macs.

We have the complete details on Apple’s transition to its own ARM processors.

Usually, the Mac is a short section of the WWDC keynote. This year, it’s front and center, thanks mostly to the ARM switch. But there are also big changes coming to macOS this year. The next version of macOS is called Big Sur, and it’s officially version 11.

If you felt like macOS was started to look a little tired, you’re in for a treat with Big Sur. It features a revamped user interface, with reworked menus, app sidebars, and app icons. Notification Center has improved functionality, and Control Center—a main UI element for iPhones and iPads—is now available on the Mac.

Apple used its Mac Catalyst technology to convert the iOS versions of Maps and Message to new Mac versions. And Safari has a slew of new features, including improved speed, start page customizations, improved support for Extensions, and new privacy features.

Learn more about the new features of macOS Big Sur.

This is the iOS update that longtime iPhone uses have been aching for, mostly because it has a feature that’s long overdue: A new Home screen. Apps can be automatically grouped together in a screen called the App Library. You can add widgets to your Home screen for quick access to the information you need.

Siri gets some updates, with a new interface and new incorporation in a Translate app that can translate written and spoken words in real time. Translate works completely on the device to maintain your privacy.

Apple has brought the iPad’s picture-in-picture feature over to iOS. If you’re watching a video or making a FaceTime call, the video screen will be in a persistent box, regardless of the app you are using.

Get the details on iOS 14’s new features.

Last year, Apple introduced iPadOS, a version of iOS that’s designed for use on Apple’s tablet. With version 14, iPadOS continues to evolve with features specific to the iPad.

Apple is changing the design language of the iPadOS so that app can take better advantage of the platform. Apps will stop looking like iOS versions that were brought over to the iPad. You’ll see better implementations of sidebars, toolbars, and menus.

iPadOS 14 has improved Apple Pencil support, specifically for handwritten text. Apple is bringing over its Scribble handwriting recognition engine, so you can write in apps as well as input fields, and the iPad will be able to recognize it.

Many of the new features in iOS 14 are coming to iPadOS, such as the revamped Siri interface, App Clips, and redesigned widgets. However, iPadOS is not getting the App Library feature.

The next version of the Apple Watch operating system has some major new features. The main new feature is sleep tracking. It can track how much sleep you get, and also has a “wind down” function.

In this time of the COVID-19 pandemic, Apple has created a new feature to help you wash your hands. It can sense when you’re doing so, and start a 20-scoend time to make sure you wash properly.

Other new watchOS 7 features include the ability to share watch faces with others, a new Dance workout, and an enhanced Noise app to help protect your hearing.

Here are the 5 ways watchOS 7 will supercharge your Apple Watch this fall.

The smart home is an ever-growing market for Apple, and the company made several improvements to the Home app and the underlying HokmeKit technology. Among the features introduced were:

Find out more about the new features of HomeKit.