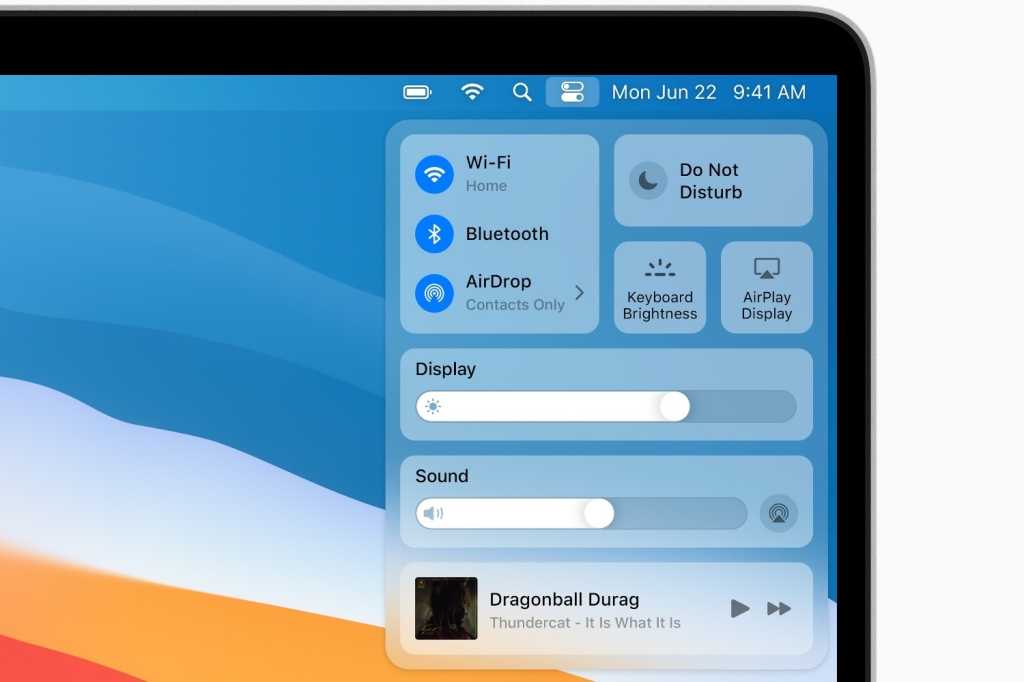 With macOS 11 Big Sur, Apple takes the opportunity to refresh the Mac’s user interface. The changes aren’t dramatic—don’t worry, you’ll be able to use your Mac like usual. The changes give the Mac a more modern look, and also have led to  speculation that Apple is getting ready for the next phase of user input, like maybe a Mac touchscreen.

If you are wondering what Big Sur looks like before installing it, we have a peek right here. You can prepare yourself before you dive in.

Once you start up your Mac and log in, the Finder looks pretty much the same. The changes are subtle. For example, the menu bar icons are spread out, with each icon having a little more space. It makes it easier to spot the icon you want.

Click on a menu, and you’ll notice that the listed items have more space.

Apple’s menu bar items have also been redesigned. For example, The Wi-Fi menu bar has been reorganized. Now, your preferred networks for an area are listed, and the rest of the available area networks are in an Other Networks section.

If you have third-party items in the menu bar, they should look like they did previously. It’ll be up to the developers if they want to redesign their UI.

Apple has taken the Control Center from iOS and made a Mac version. Its icon appears in the menu bar, and you get quick access to controls such as network, display brightness, and volume. It is customizable, so you can add the controls you want.

When you click on the date in the menu bar, the revamped Notification Center, which combines your notifications and widgets, appears on the screen.

Apple has changed up the look of the Dock, as well. Icons of Apple apps have more of an iOS look, and the Dock has rounded corners. You still have the same options for the position of the Dock, turning hiding and magnification on or off, and to minimize the Dock using either the Genie or Scale effect.

You’ll notice other changes with dialog boxes, sidebars, Finder windows, and more within macOS Big Sur. For example, some buttons in windows disappear when you move the cursor away from the area they are located. Most of the changes aren’t major and you’ll be able to navigate your Mac just as easily as before.

Longtime Mac users will remember that the Mac used to “chime” when you powered it up. The chime is back by default in macOS 11 Big Sur. We have a separate article that covers the chime, and we also tell you how you can disable it if you prefer to have a silent boot process.

Also, the system sounds have been updated so that they are “more pleasing to the ear,” according to Apple. They’re new takes on the old version, so they’ll be familiar.