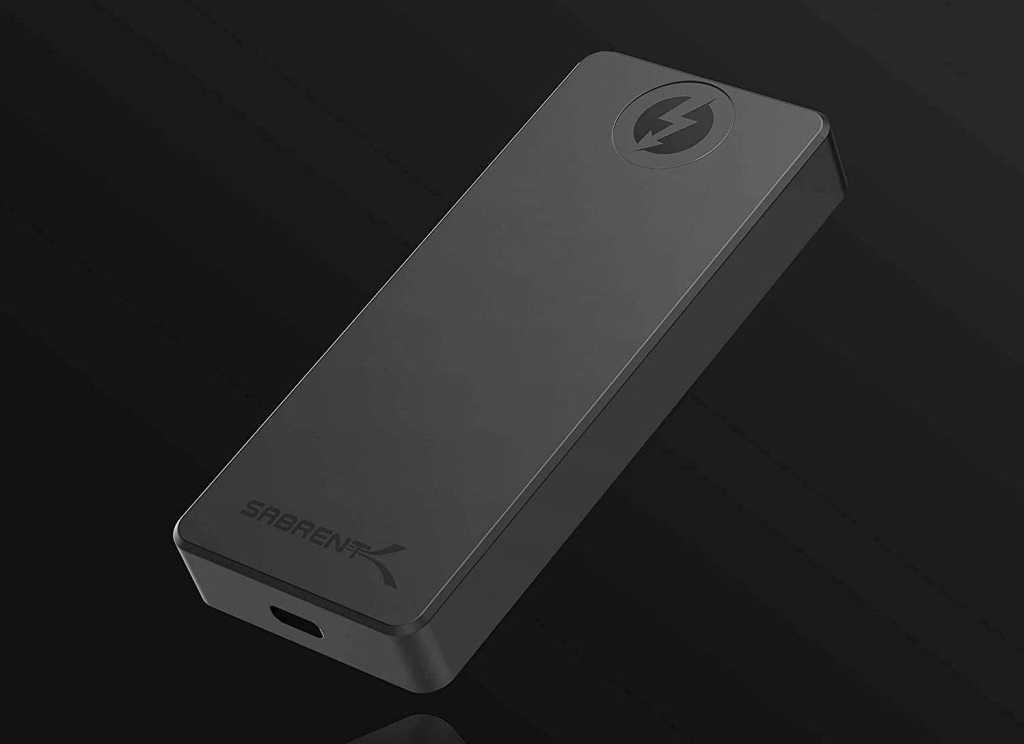 Sabrent leverages the power of their Rocket Q NVMe SSD in this small but fast, dual-interface (Thunderbolt 3/USB) speedster. It’s also available with up to 8TB of capacity. It runs a bit warm, but it solves the cross-platform conundrum and is a good performer.

Sabrent’s pocket-sized Rocket XTRM-Q external SSD offers the kick in the pants transfer speed (up to 10Gbps) provided by the Mac’s Thunderbolt 3, while adding the ability to operate via USB on computers that lack it. It is also available in a hitherto unheard of capacity of 8TB. Nice. Very nice.

The Rocket XTRM-Q (extreme/QLC) is a small, handsome, dark-slate colored monolith measuring approximately 4 x 1.75 x 0.5 inches. It weighs around 5 ounces and there is a Type-C port on the business end.

The SSD inside the XTRM-Q is Sabrent’s own  Rocket Q NVMe, which employs QLC (Quad-Level Cell/4-bit) NAND and a Phison controller. The warranty is for 5 years and Sabrent includes both Thunderbolt 3 and Type-A to Type-C cables. The former are a rather pricey item, so good on Sabrent.

I tested the 8TB XTRM-Q via both Thunderbolt 3 and SuperSpeed USB 10Gbps. According to Sabrent, the 8TB model treats 25 percent (which works out to 2.5TB) of the QLC NAND on board as SLC cache, so there was no chance it would slow down during long writes. Though as free space declines, so does the amount of NAND allocated as cache.

Blackmagicdesign’s Disk Speed rating of the XTRM-Q’s sustained read and write performance, is not the fastest we’ve seen, but still nice.

CrystalDiskMark 6 also sees the XTRM-Q as quite fast, if not as fast as the Thunderbolt-only Fledging Shell. On the other hand, as you’ll see in a chart or two, the 1TB Shell slowed down drastically on the 450GB write.

In our real world 48GB transfer tests, the XTRM-Q proved a decent Thunderbolt 3 performer, and a very good performer via USB 10Gbps.The Fledging Shell is Thunderbolt 3-only and the Samsung T7 is USB-only (10Gbps).

The 450GB write test shown below is testament to what having 2.5TB of NAND cache will do for you. The amount of cache will shrink as the drive starts to fill up, and the 1TB and 500GB versions of the XTRM-Q will likely slow down before this test is finished due to having less than 450GB of cache. We did not have those capacities to test.

All in all, you’ll like the 8TB XTRM-Q’s performance. USB drives cross platforms, but so far this is the only external USB SSD we’ve tested that also offers speed of Thunderbolt 3. No compromises is a good thing.

All testing was done with the drive formatted to NTFS (Windows) and HFS+ (Mac) to achieve best-case results. To cross platforms, you’ll need to either format the drive to exFAT (with slower small file writes), or employ additional file system drivers. We did not enable write caching for the drive as recommended by Sabrent. You can squeeze extra performance out of the XTRM-Q by doing this.

If you want the performance of Thunderbolt 3, but need to retain compatibility with USB-only computers, then the XTRM-Q is what you want. 8TB that fits in a shirt pocket ain’t half-bad either, even if it means removing a substantial number of Benjamins from your wallet.