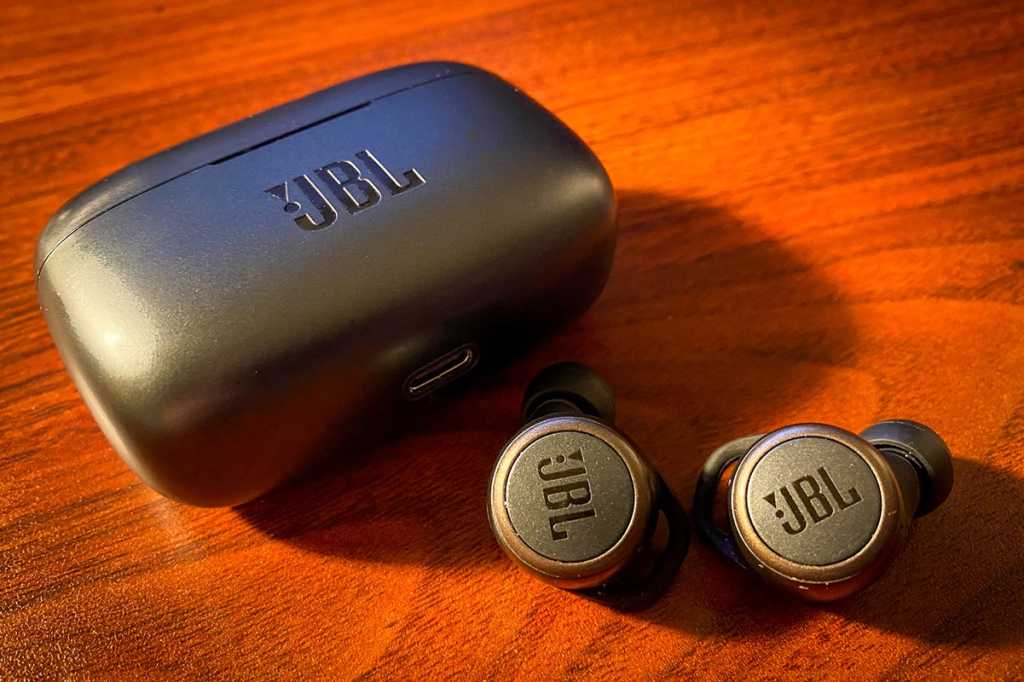 Those on a budget will find the JBL Live 300 TWS’s many features, equalizer, and good sound quality (with tweaking) worthy of consideration.

Considering the JBL Live 300TWS’s price and relatively simple design, I expected an equally simple experience—but I shouldn’t have judged a pair of true wireless earbuds on its subdued looks. A couple of weeks on, the Live 300TWS’s features still dazzle me, and the music quality is far better than I expected from buds in this price range.

The 2.7-inch-wide case alone looks as if it could come from a premium set of earbuds. Smooth, compact, and pocketable, its notification lights have a chic air reminiscent of luxury goods: A ring around the USB-C port along the bottom pulses white while the earbuds charge inside—the better to see where to stick the plug in low light—and it shifts to red once the cable is in. The act of opening the case could be more elegant, though; eventually, I fumbled far less with the lid after learning to pull it up from the sides.

The case is also attractive in light of JBL’s estimate that they deliver 14 extra hours of battery life, as you’ll need it. Despite JBL’s claim that the buds will play music for a full six hours, on two occasions they sputtered out before I reached the fifth hour.

As for the earbuds themselves, the Live 300TWS fit perfectly in my ear right out of the box. In what was a first for me, I didn’t need to experiment with the two other ear gels or four stability fins. They fit so snugly that they almost doubled as earplugs—they even look a bit like them from a distance. (Or at least as black, blue, purple, or white metallic bolts drilled carefully into your skull, depending on which color model you bought.)

However, don’t go jumping into swimming pools with them. They may look waterproof, but in truth, they only have a rating of IPX5. So while these earbuds will survive workouts—speaking of, they never budged from my ears during outdoor jogs—you’re going to be in for an unpleasant surprise if you submerge them. If you need that kind of durability, check out the many other earbuds with a rating of IPX7.

The JBL Live 300TWS lack active noise canceling, but their passive noise cancellation from the good fit and seal works about as well as a low-grade set of earplugs. In other words, it won’t drain out airplane noise, but it does a good job of muffling normal office sounds. And conveniently, JBL equipped these buds with a couple of features to address how unwieldy it can be to take them out of your ears often.

First is “Ambient Aware” mode, which uses the microphones to pick up sounds from your surroundings. While I’ve heard better, it works well enough that I never felt compelled to pull these out to hear traffic and conversations. The second, more unique mode is “TalkThru,” which drops the volume of your music to barely audible levels so you can keep jammin’ while carrying on a conversation. I was particularly grateful for it while standing in checkout lines at the grocery store.

Normally, I’d expect to find these features in ANC buds, and they’re a welcome addition. There’s a small catch, though: You have to choose which of the two you want to assign as to the forward swipe on the left earbud. You’ll always have to activate the other through the My JBL Headphones app.

Why the limitation? It probably has to do with how JBL tied a legion of other touch gestures to these buds, leaving little room for these newcomers. The right earbud handles the more intuitive tasks, such as tapping once to play or pause, tapping twice to skip to the next track, or tapping three times to jump back to the previous song. Hold down the right earbud and you’ll trigger your phone’s native voice assistant—Siri in my case. Beyond that, you can boost the volume with a forward swipe and crank it down with a reverse swipe. For its part, the left earbud allows you to activate either the Google Assistant or Alexa via their phone apps with a long press. (You’ll set your preferred choice in the My JBL Headphones app.) With all those options at my fingertips, I was more than a little surprised that JBL doesn’t allow you tie the left bud to a triple tap. I’d love to tie Ambient Aware or TalkThru to this gesture, but alas, it’s not to be.

All of the touch gestures work as well as you might expect. Sometimes the JBL Live300TWS has trouble distinguishing between a single tap and a swipe, but (much to my surprise) I rarely struggled with this after the first day. Setup in the My JBL Headphones app also goes fine, though Google Assistant gave me far less trouble than Alexa.

Let’s get this out of the way: I hated the sound of the JBL Live 300TWS out of the box. The bass felt flat and almost non-existent, and the highs felt as though they were coming from another room. Almost everything else about these buds leaves a great first impression—including the microphone, which yields crisper recordings than Apple’s AirPods Pro—but that first experience of the sound can feel like a punch to the gut if you’ve just paid full price for them.

Fortunately, that impression changed quickly once I hopped into the JBL app and fiddled with the equalizer there. By default the EQ has four settings: Off (ugh), Jazz, Vocal, and Bass. The real way to make these buds sing, though, is to create your own EQ preset through the app. With some tweaking, I could get Queen’s “Another One Bites the Dust” to deliver a satisfying (but not perfect) thump from the famous bass line. The same goes for Billie Eilish’s “Bad Guy.” It helped considerably, though at the other end of the equalizer spectrum, the bright highs continued to rob tracks like Sigur Rós’ “Glósóli” of some power and depth.

Overall, the JBL Live 300TWS do far better with music that sits more firmly in the middle of the equalizer spectrum, like Tilly and the Wall’s “Let It Rain,” Old Crow Medicine Show’s “Wagon Wheel,” or orchestral tracks like “Samwise the Brave” from the Lord of the Rings soundtrack. It handles heavy tracks like Rammstein’s “Deutschland” well enough, but I missed the delightful menace that song delivers in the low and middle ranges with more expensive earbuds.

The JBL Live300TWS may technically retail for $149.95, but lately they’ve been selling for as little as $119.95 at both Amazon and JBL’s site. These are excellent earbuds for that price. They may not have active noise cancellation or the range of sound you get from other earbuds, but their features, decent bass, build quality, and general comfort do much to make them establish them as attractive alternatives to pricier truly wireless earbuds.

If you’re on a bit of a budget, the JBL Live 300 TWS’s many features, equalizer, and good sound quality (with tweaking) make them a worthy option.  The battery life may not be as impressive as JBL advertises, but the case at least allows for a couple of extra charges.