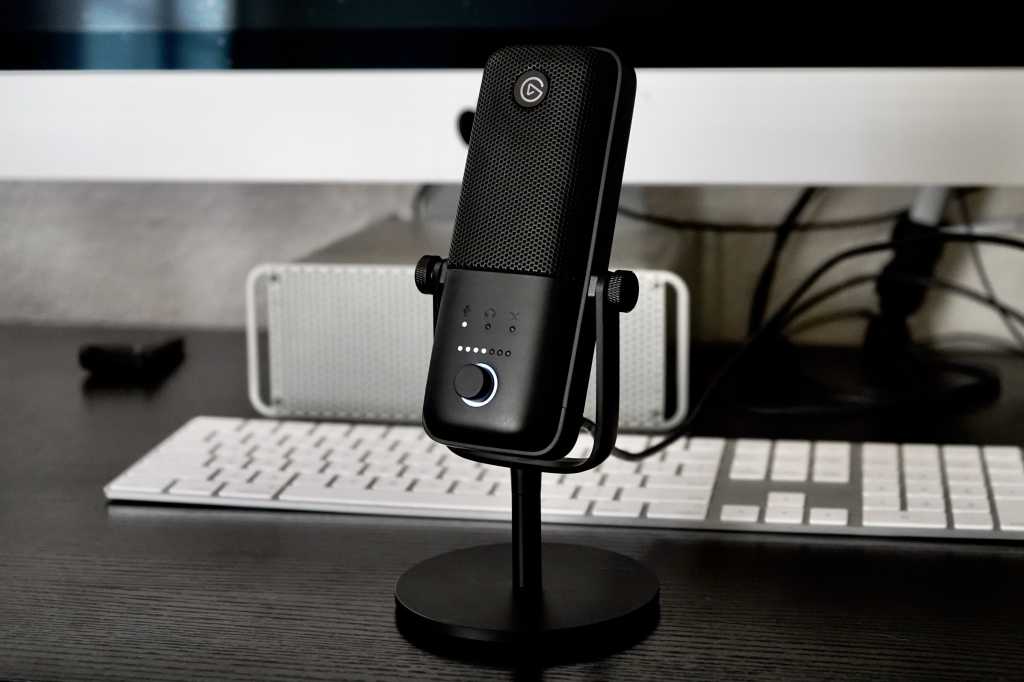 Excellent hardware quality and a very useful software mixer combine to make this a killer USB microphone for vocal content.

Elgato is a brand best known in the game streaming community. Its video capture devices are the go-to solutions for Twitch superstars and YouTube gaming channel creators. Not satisfied with enabling great home video capture, the company teamed up with Lewitt to produce a USB microphone that aims to give content creators professional results at an affordable price.

The result is the Wave:3, a $160 USB microphone that delivers remarkably good sound quality for vocal recordings (a simpler Wave:1 is also available for $130). While Elgato aims many of its other products at PC gamers, the Wave mics are equally marketed toward podcasters and YouTubers, where the Mac has a much larger presence.

A combination of high quality, affordable hardware along with an excellent software mixing panel makes the Wave:3 an especially appealing choice for anyone using their Mac to record podcasts, voice-overs for YouTube videos, or even singing.

The Wave:3 has a simple design, with a lightweight mix of plastic and metal that looks, well, like you’d expect a studio microphone to look. Most of the weight is in the sturdy stand, which unscrews to a standard 3/8-inch mount. You’ll find an adapter to 5/8-inch threading in the box, so you can easily attach the mic to the booms and mounts that use that size.

Up front is a multi-function dial. Press it to switch between microphone gain, headphone volume, and monitor/output mix. Around the back is the USB-C port (the main interface for your computer) and a 1/8-inch headphone jack. It is a rather powerful headphone jack, suitable for most studio cans and maybe a little too much for everyday consumer earbuds and the like.

The headphone jack serves as output for direct microphone monitoring and as a USB sound output device for your Mac or PC, and you use the multi-function dial up front to adjust the mix as you’d like.

Up top you’ll find a capacitive mute button. At first this seemed like a ridiculous extravagance to me, but it’s actually clever design—it is located in a place you’re unlikely to hit as you grip the sides of the mic to adjust its position, and a clickable button often produces an audible sound when muting or un-muting.

There’s little to complain about from the perspective of a desktop USB microphone. If you ever want to step up to a more professional setup, you’ll long for an XLR plug and quarter-inch headphone jack, but that’s simply not what this mic is made for. This is a mic for computer-based recording at home (or traveling with a laptop), and for that the design is aces.

Behind the grille is a mild integrated pop filter (you can buy a bigger separate one, too) and a 17mm electret capsule that captures sound in a cardioid pattern, suitable for most up-close spoken word and singing performances. It feeds a 24-bit, 96KHz analog to digital filter with some really clean circuitry. I never once experiences any interference, hums, buzzing, or other unwanted artifacts.

Elgato incorporates two additional sound features in the Wave:3 that you can enable or disable using the included WaveLink app. The first is a lowcut filter, useful for eliminating some background room sounds or fan noise from your recordings. The second is an excellent hardware-based limiter called Clipguard. When sounds peak above a certain threshold, the mic instantly switches to a separate hardware signal path in the analog to digital converter that is 20dB quieter. This effectively extends the 95dB dynamic range to 115dB.

Clipguard is exactly the sort of thing amateur content creators need. It takes excessively loud outbursts of excitement or laughter and makes them palatable without the need for “fix it in post” editing or running your audio through a separate hardware compressor.

Even with the lowcut filter disabled, the 70Hz to 20KHz frequency range of the mic is pretty weak in the really low frequencies. This won’t affect voice recordings very much, and in fact might even reduce the “proximity effect” whereby the bass gets overblown if you get too close to the mic. But you shouldn’t count on the Wave:3 to record your kid’s piano recital or weekend Green Day tribute band. You’d want to use a dynamic mic, not a condenser mic, for that sort of thing anyway.

You’ll pick up voices quite well from about two feet away, so you can place the mic in a comfortable desk location without getting right up on it, but this isn’t the right gear for your home music production studio.

The secret weapon for Elgato’s Wave:3 microphone is its Wave Link software. You can add up to nine separate inputs (including multiple mics), and mix them down into two different outputs: a local output sound device and a virtual sound device for your recording or stream.

Just set the input of any recording software (that includes things like Zoom meetings) to “Wave Link Stream” to grab the mixed-together audio. You can quickly and easily control the mix volume and monitoring volume of any of the sources or mute the monitoring or recording levels individually.

Let me just restate that, because it’s so incredibly powerful: You can set two separate mix volumes, one for you to listen to and one for your recording or broadcast, for up to nine inputs, each of which can be a hardware device or an application like a web browser, music app, game, voice chat, and so on.

It’s an extremely fast, simple, and user-friendly virtual sound device mixing board for your Mac. Let’s say you’re recording an interview over Skype. You want to record your own input from the Wave:3 along with low level background music from Spotify and the audio from a relevant news video in your web browser. But you don’t want to record the interviewee on Skype, as they’re recording their own voice on their end, and the only thing you want to send to them over Skype is the audio from your Wave:3 mic. Wave Link makes such a scenario dead simple.

The software’s one achilles heel is that it can not support multiple Wave:3 or Wave:1 mics at this time. If it could, you could simply plug several Wave mics into your MacBook Pro and have a simple, affordable, stunningly high quality portable podcast recording setup. The software does allow other mics as inputs, but the Wave Link software also manages the gain, output volume, monitoring mix, lowcut filter, and Clipguard on a Wave:3 mic and it can’t do that for multiple Wave devices yet.

I’ve been told that, “It’s definitely something that’s been discussed for a future update,” so here’s hoping it comes sooner rather than later.

An awesome bargain for podcasters and YouTubers

If you’re recording vocal content directly on your computer, the Wave:3 is a killer deal. $160 is very competitive with other high-quality microphones, most of which don’t have the Wave:3’s simple and elegant design or excellent mixing software.

Whether its live streaming video games, doing voice-overs for YouTube videos, or putting together a podcast on your MacBook, the Wave:3 delivers professional-grade results at a very reasonable price. It’s ill-suited (and not intended) for capturing music performances, and its construction is lightweight and portable but isn’t quite as heavy-duty as some competitors. Those are about the only criticisms I can make about what is destined to be a hit product for the home content creator, especially if Elgato can make its Wave Link software work with multiple Wave mics at once.