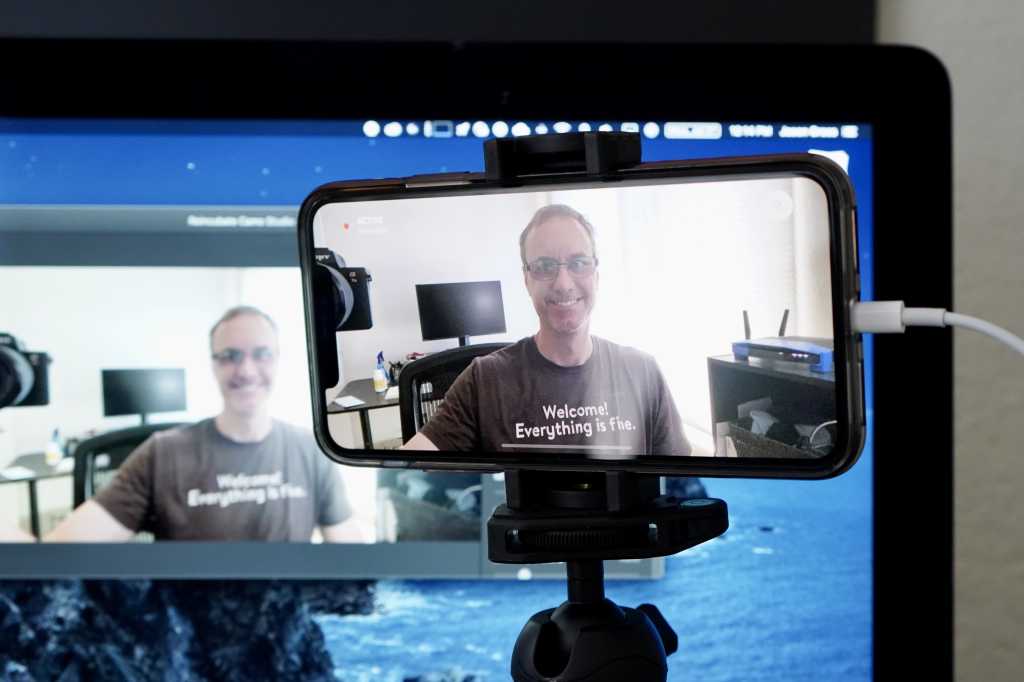 Despite an annoyingly steep price and the lack of audio support (for now), Camo is the best way to turn your iPhone into a Mac webcam for stunning results.

Every Mac (other than the Mac Pro and Mac mini) includes a built-in webcam, which Apple calls a FaceTime camera. And every single one, without exception, is total garbage. They top out at a paltry 720p resolution, with the exception of the iMac Pro’s 1080p model. Resolution aside, they produce video that is grainy, blotchy, relentlessly underexposed, and with horrible dynamic range.

This is weird, because Apple also makes some of the best cameras you can buy on a phone or tablet. The iPhone and iPad’s cameras put not just Apple’s crummy Mac webcams to shame, they outshine any webcam. Even the front-facing iPhone cameras!

Enter Camo, a handy utility by Reincubate that turns your iPhone into a Mac webcam. It’s not the only method of doing so, but it may be the best. With the steep price of $40 per year, it’ll cost you, but it’s less than buying a new webcam (and because it’s software, it’s not sold out like all the good webcams are).

The best webcam is the one you have with you

Now that millions of people who are lucky enough to still have a job are working from home, we’re all doing a lot more Zoom and Microsoft Teams meetings than ever before. Users who have never bothered to use the built-in camera on their MacBook are suddenly relying on it multiple times a week.

That’s one good reason why decent USB webcams are perpetually out of stock these days. Instead of buying a new webcam, you can buy a piece of software that turns your iPhone into one.

The iOS app is free, but is just a connector to the Mac app, where all the magic happens. The free Mac app is limited to 720p resolution and only the standard wide or selfie cameras on your iPhone, and you can’t disable the annoying watermark. If you can live with it, it’s already going to be a much better solution than any camera built into any Mac.

A one-year license costs $39.99, but lets you remove the watermark and opens up 1080p video, all the cameras on your iPhone, and a whole mess of useful settings. You can adjust shutter speed, ISO, focus, temperature, tint, hue, mirroring, and more. It’s a simple and intuitive interface, and it’s all on your Mac—once you mount your iPhone into some sort of clip, you don’t want to have to change settings with it.

Here’s an example of the Camo interface. You don’t have to know anything about cameras to quickly see where everything is and what it does; nothing is hidden under nested menus. The preview shows you all changes in real time. And while it’s quite annoying to have your iPhone flash in your face, you can even turn that on and adjust its level if you’re having a meeting in the dark.

Want to know how good it looks? The comparison shot below shows the Zoom meetings screen in identical lighting with three different cameras: the built-in FaceTime camera on my 2017 iMac, a Logitech C920, and my iPhone 11 Pro with Camo.

It’s not even close. To beat your iPhone as a webcam, you’ll need to use your DSLR, which can be a fairly expensive proposition.

Your iPhone will get a little warm while using Camo, as Reincubate does as much processing as possible on the phone side to reduce the load on your Mac.

It just costs too much

Camo is simply one of the most full-featured, easy-to-use, and delightful ways to rectify the absolutely terrible Mac cameras with the iPhone you’ve already got. It doesn’t yet work with everything, but the compatibility list is long and growing. Odds are, it works with what you need it to work with.

If I had to gripe about something, it would be the fact that it currently is only a camera, and does not pull audio from your iPhone’s microphone. That feature is on the roadmap and should be available in an update soon. Also on the roadmap: 4K resolution, Windows support, support for Portrait mode, chroma-keying, reduced iPhone power consumption, and Wi-Fi pairing.

Even with those features, the $39.99 price seems steep. That would be a reasonable price to pay as a one-time fee, but a one-year license feels like it should cost half as much, or even less.