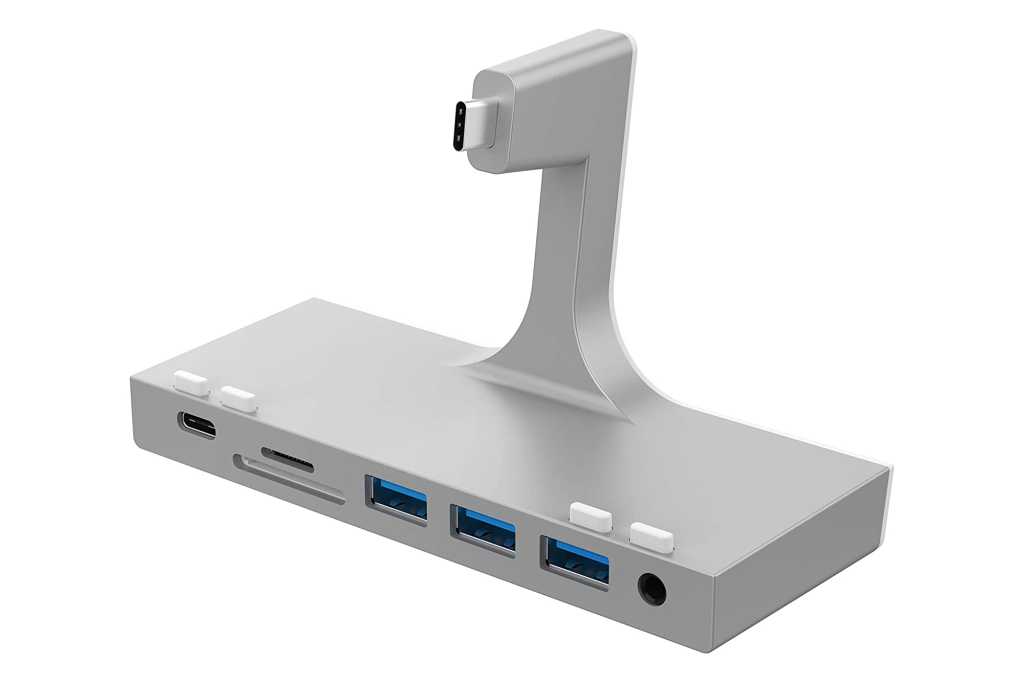 The HB-SIMC port hub functions as advertised, putting ports in a far handier location on front. The biggest issue is that it doesn’t passthrough Thunderbolt 3, which may limit it’s appeal for power users.

Sabrent’s new $70 HB-SIMC Thunderbolt 3 port hub alleviates a frustration that hits every iMac owner now and again: the lack of easily accessible ports. Don’t get me wrong, I—and just about everyone else I know—love the uncluttered styling and elegant long-term cabling solution iMacs provide.

But geez, Louise, feeling around for a free USB port just to plug in a thumb drive can get old after a while. Especially if you do it a lot. Of course, you can always use standard docks, hubs, extension cables, but then it’s generally bye-bye clean and uncluttered. To the rescue…

Sabrent’s Multi-Port USB Type-C Hub with Front Access USB Ports marries to a Thunderbolt 3 port on the back of the iMac, with the body of the port hub flush with the face and bottom of the iMac.

The four plastic nubs shown in the title image fit into the iMac’s bottom vent, assuring the hub doesn’t move when you insert or remove devices. It does such a good job, that you’ll need to hold the bottom of the iMac to make sure the tilt angle doesn’t stray unduly during insert or removal.

The picture below shows the marriage of hub and computer quite nicely. It looks, well, iMac like.

Note that in my hands-on, the Thunderbolt 3 jack didn’t marry quite as well as you see in the image above. There was a small gap. But it certainly fit well enough to function, and the less-than-flush coupling is not in plain sight, so that’s a bit of a non-issue. This might also have been this particular iMac. If you’ve ever had one apart, you’ll know that the port sub-assembly can vary in position ever so slightly.

The other nitpick is that while the HB-SIMC looks very iMac-like in place, it might’ve looked “perfectly” iMac in real aluminum rather than painted plastic. Then again it’s $70…

Sabrent outfitted the HB-SIMC with the type of ports the average user will use most often. On the front of the dock are three 5Gbps Type-A USB ports (thumb drives, etc.), a headphone jack, a 5Gbps USB Type-C port (handy for charging phones), and two memory card slots: SD and microSD.

On the back is an HDMI port supporting 4K for a second display, as well as a power jack in case the attached devices require more juice than the Thunderbolt 3 bus can deliver. An AC adapter is provided.

Performance and missing pass through

Installing the HB-SIMC was a breeze, though the tight fit does require just enough pressure to make one just a tad nervous during the process. All the ports worked as advertised, with cards, thumb drives, external SSDs, and a 1080p display all quickly appearing on insert and functioning properly. No drivers required. Audio quality was fine.

The elephant in the room for heavy Thunderbolt users is that there’s no pass through port, leaving you with just one open T3 port. In my case, having a Thunderbolt audio interface that itself lacks pass through, that makes the HB-SIMC a non-starter. For most users, this won’t be an issue. It’s a common issue with less expensive Thunderbolt equipment, but it’s a concern that bears mentioning.

The HB-SIMC is an exceptionally handy, cleverly designed hub. That it looks as if it might’ve shipped with the the computer is also a big deal. I mean, let’s be honest—looks are half the reason iMac sell so well.

Perhaps if the HB-SIMC sells well, Sabrent will consider a, HB-SIMT version that better accommodates those who have lots of Thunderbolt devices.