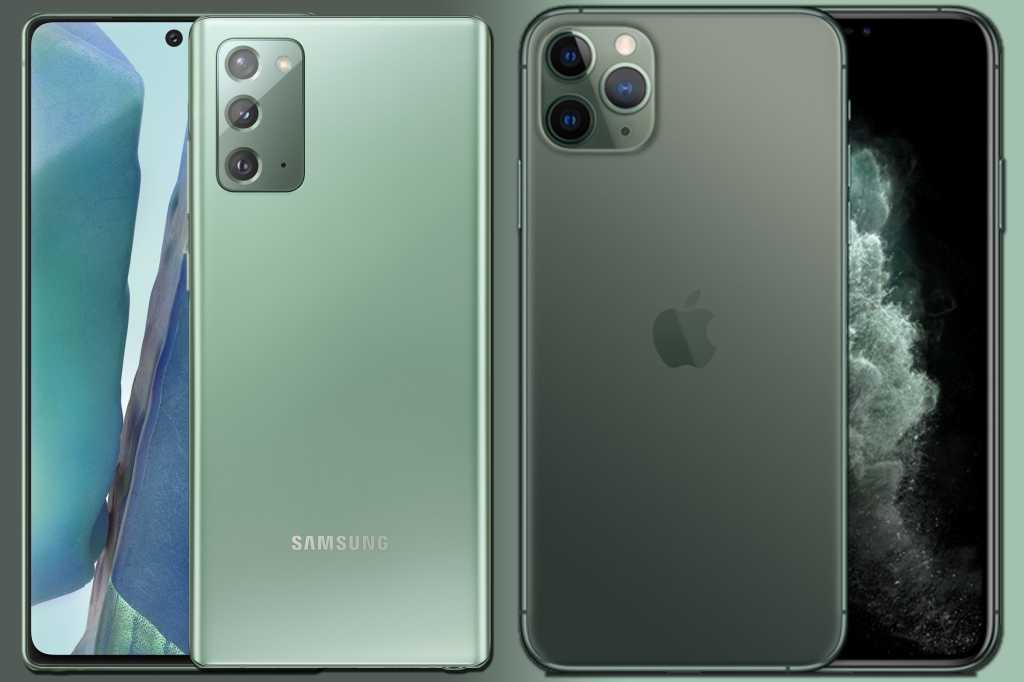 Whenever Samsung launches a new phone, Apple fans tend to notice. It’s not just that Samsung is one of the biggest Android phone makers or even that its designs tend to be among the closest to Apple’s, it’s that Samsung’s flagship Galaxy phones are really, really good. They have the latest processors, displays, and cameras, and the innovative trends that we see in the latest Galaxy S or Note phone generally make their way to the iPhone.

So it is only natural to compare them. The Galaxy Note 20 that was revealed earlier this week costs the same as the iPhone 11 Pro (a dollar more, to be exact), so you’d think it would trounce it, right? Not so much. Samsung has cut corners and sacrificed features to keep the Note 20 “affordable” compared to the $1,299 Galaxy Note S20 Ultra, so even an 11-month-old iPhone can hold its own. But which one should an unbiased consumer buy?

The iPhone is one of the few phones that still has a notch, and it is definitely starting to show its age. Like the S20 and most other Android phones, the Note 20 has a small hole in the top of the display for the selfie camera, and it is much more appealing to the eye. Of course, Apple needs a notch for its FaceID camera system, but Samsung’s Infinity-O display is the clear winner.

While most of Samsung’s Galaxy phones have curved “edge” displays that remove all visible side bezels from the front of the phone, the Note 20 is a “flat” phone, so there are bezels all around. They’re a little thinner than they are on the iPhone 11 Pro, but they’re also unbalanced, so the space at the top and bottom is thicker than the sides. It’s close, but I prefer Apple’s symmetry.

Around the back, the two phones are very similar, with both the Note 20 and iPhone 11 featuring a giant camera array in the top left corner. Samsung’s is rectangular and more prominent than Apple’s square housing, but both are bulbous, bumpy, and somewhat unsightly. Aside from the color differences—bronze is the new color for the Note, while Apple’s signature iPhone 11 hue is midnight green—the Note 20 has a plastic finish versus Apple’s glass covering. The Note 20 is also much larger (161.6 x 75.2 x 8.3mm) and heavier (194 grams) compared to the iPhone 11 Pro (144 x 71.4 x 8.1mm, 188 grams)

The iPhone 11 Pro and Note 20 both have a lot of screen, but Samsung’s phone is significantly larger than any phone Apple sells and nearly an inch bigger than the 11 Pro.

Both of the phones here have the fastest possible processor, with the Note 20 rocking the Qualcomm Snapdragon 865+ and the iPhone running the A13, but as we’ve seen, Apple’s silicon is vastly superior. But even if we call that a wash since benchmarks don’t tell the whole story, the Note 20 has a far smaller amount of RAM than 2020 premium Galaxy phone users are accustomed to getting—just 8GB versus the 12GB on the Note 20 Ultra and entire S20 line. Granted, that’s twice as much as the 4GB in the iPhone 11 Pro, but Apple does a far better job with optimizing its system, as evidenced by the 12GB and 16GB of RAM you get on Samsung’s other phones.

For storage, you get 128GB on the Note 20 and just 64GB on the iPhone 11 Pro. Both should be plenty for the things you want to do, but here’s hoping the rumors that Apple will be doubling the base storage are true. Elsewhere, both phones have IP68 water resistance and neither has a headphone jack.

The reason for the iPhone 11 Pro’s notch is the TrueDepth camera, which handles Face ID. The iPhone is still one of the only phones to support a proper 3D facial recognition system, and it gives the iPhone a huge advantage over the Note 20’s ultrasonic fingerprint sensor. On previous Galaxy phones, Samsung’s in-display sensors have been finicky and less-than-100-percent reliable, so Apple gets the edge here.

On paper, the Galaxy Note 20 has a much bigger battery—4,300mAh vs 3,046mAh—but in real-world use, both will likely get you through a full day of heavy lifting. They both support fast charging out of the box as well, though Samsung’s 25W charger will fill your phone up a little quicker than Apple’s 18W one.

While the iPhone 12 is rumored to bring 5G to the iPhone this fall, the iPhone 11 is still a 4G phone. The Note 20, on the other hand, supports both mmWave and sub 6GHz networks on the three major carriers in the U.S., so you’ll be able to take advantage of the fast speeds. However, the reality of 5G is that many people don’t have it, and even the ones who do aren’t seeing the insane speeds that it will one day deliver. Most of the time you’re going to be using 4G, anyway.

Debates between Android and iOS aside, Samsung has promised that the Note 20 will get “up to three generations” of Android updates to bring the latest features and security to their thousand-dollar investment. That’s much better than their previous noncommittal update schedule, but it pales in comparison to what you get with the iPhone.

Apple doesn’t specifically offer a limit on updates, but the iPhone 6s, which launched in 2015 with iOS 9, will be getting iOS 14 in the fall, a full five years and four version upgrades. So the iPhone 11 Pro should be able to install iOS 18 and maybe even iOS 19 in 2025. Even with the promise of three generations of updates, the Note 20 will be long on the scrap heap by then.

The iPhone 11 Pro and Note 20 both feature triple-camera arrays and they’ll both take fantastic pictures:

I haven’t had a chance to test the Note 20’s camera, but it’s very similar to the Galaxy S20+, which I have tested. You’ll be able to take excellent photos for sure, but in my experience, the iPhone 11 Pro is the stronger shooter, especially in low light. Samsung promises that the Note 20 represents “the biggest leap in low light photography in a Galaxy,” however, so that could bring it up to the iPhone’s level. Regardless, you’ll take very good pictures with either phone.

It’s hard to look at these phones and not immediately gravitate to the iPhone 11 Pro. The screen may be way bigger on the Note 20 and you get 5G and an S Pen, but otherwise, the iPhone 11 Pro either matches or beats it in every category. And if you wait a month or two, you’ll probably be able to get a 6.1-inch 5G iPhone 12 for the same price as the Note 20.

If you really want a new Note, I’d recommend spending a few more dollars and getting the Note 20 Ultra, which brings a larger high-res, 120Hz screen, a better camera, glass body, and 12GB of RAM. But if you don’t want spend more than a thousand bucks, the iPhone 11 Pro is the way to go.

Update 8/9: This article has been updated to correct the latency of the Galaxy Note 20’s S Pen to 26ms.