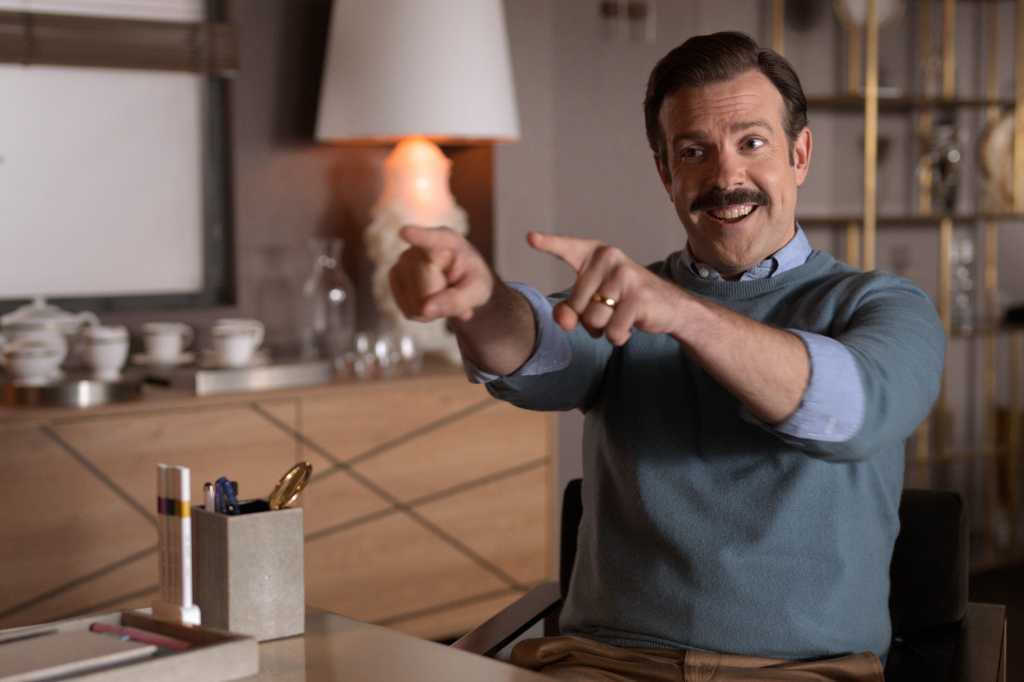 Ted Lasso is an college football coach from Kansas who is hired to coach an English Premiere League team. He knows next to nothing about soccer, and has never been to the U.K. But he sure loves being a coach!

That setup fuels a formulaic fish-out-of-water comedy filled to the brim with sports tropes. But Jason Sudeikis’ performance as Lasso, and the small witty subversions of some usual routines, are more than enough to keep you watching.

The show is low-stakes, quick-witted, and almost impossibly positive. It’s unlikely to win any major awards and presents no big ideas to get you talking about the latest episode with your friends and coworkers. But it’s also by far the easiest Apple TV+ show to get into, and the one any random viewer is seems most likely to like.

The Ted Lasso character originated in a comedy short promoting NBC Sports’ then-new coverage of Premiere League games. That Lasso is essentially the same as the one in the show, with one small but important difference: in the short, we’re meant to laugh at what an ignorant idiot Lasso is. In the show, Lasso is still entirely ignorant of all things English (including football), but he is no fool. He’s eager to learn and improve; he’s getting it.

More important, for both the character and the show, is that Lasso cares more about molding a bunch of big-ego hothead players into better people and a cohesive team than he is about wins or losses (or ties—there are ties!). It’s a sports trope that we’ve seen a million times, and Sudeikis sells it perfectly. He spends every scene dropping humorous off-the-cuff remarks while relentlessly building up literally everyone around him. It’s infectious.

A cornucopia of tropes and clichés

It’s impossible not to like Ted Lasso and to root for his success. He’s good-natured, friendly, and uplifting to a fault.

Hannah Waddingham, who plays Rebecca the new team owner, seeks to exploit Lasso in her bid to destroy the team. Yes, it’s another old sports trope—the posh new Cruella de Vil owner who secretly wants to destroy the team from the inside! She thinks Lasso will be a useful idiot in this endeavor, but even she can’t help but be somewhat won over by him.

Ted Lasso is so filled with sports tropes and fish-out-of-water clichés that at times it seems constructed of little else. Tea is not as good as coffee! The Nigerian player is friendly and eager but lacks confidence! The team’s best player is a model-dating hothead with an enormous ego! Guy from Kansas eats Indian food and it’s way too spicy!

While the show is packed with these tropes, it often twists them just a little. For example, Rebecca gained ownership of the team in the divorce from her philandering husband, and we’re given just enough of that depth in her character to feel a little sympathetic toward her. This is a show that doesn’t even want you to hate its villain. Not really. The star player’s airhead model girlfriend with the Bristol accent is not nearly as dumb as everyone assumes.

You’re not going to see any original ideas in Ted Lasso, but what’s there, while hackneyed, is executed deftly. Sudeikis’ good-natured charm washes over the whole show and every tired cliché it is built upon. How can we be upset about the show’s utter lack of originality when its lead character is beaming so much positive energy into our living rooms? When nearly every supporting role, even the one-note characters, have a smaller second note that takes the edge off?

Ted Lasso is a show that is pulls off a difficult trick: it makes a hard push to be likable, and lands. You don’t need to like sports or know anything about football (the U.S. or U.K. variety) to enjoy it. You don’t have to keep track of a complex plot. It doesn’t stress you out, or make you sad or angry, or tug hard on your heart strings. There’s nothing here to think about. You face zero challenges as a viewer here, just smile and chuckle. This is, by far, the easiest show on Apple TV+, and it’s amazing that it works.

At a time when everything seems stressful and more difficult than it needs to be, Ted Lasso may be just what we need; an easy, breezy comedy with likability and positivity without feeling cloyingly sweet and sentimental.