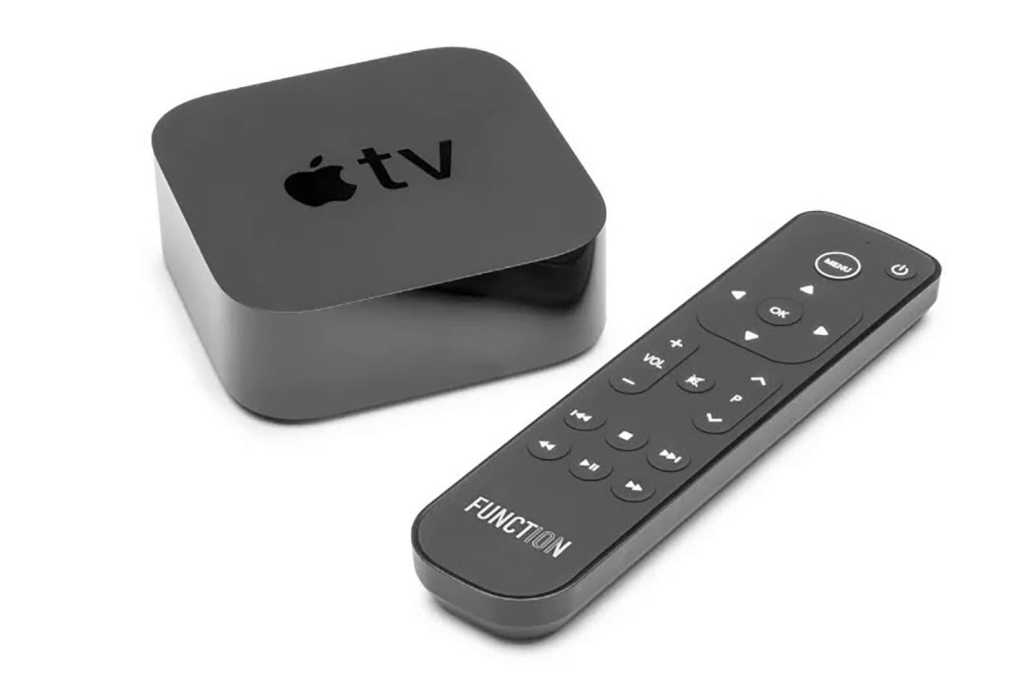 Function101
At a Glance

There’s nothing especially special or interesting about this remote, and yet, it’s easier to use than Apple’s own remote. That says more about the awful Siri remote than the excellence of this one.

The Apple TV remote is so bad that a Swiss streaming TV company named Salt actually made headlines when it started to ship an alternative. That remote may be a little hard to get your hands on, but now Function101 is selling what appears to be the identical remote for $30, so it should be a lot easier to get.

I’ve been using the Function101 remote for the last week with my Apple TV 4K, and while I find its design to be vastly superior to the Siri Remote that came with my Apple TV (a low bar to clear, to be sure), I also found enough minor annoyances to temper my recommendation.

It’s not exactly going out on a limb to say the Siri Remote is a disaster. Even Apple’s biggest fans recognize it as a design flop on par with the original Apple USB Mouse (aka “ The Hockey Puck”). It’s far too small and flat to fit comfortably in the hand, too symmetrical to operate by feel alone, and the swipe controls are mushy and imprecise.

Function101’s remote appears to be identical to the remote offered by Swiss internet provider and streaming TV company Salt. It’s about half again as long as the Siri Remote and several times as thick—so it’s not large by any means, but it’s a lot easier to hold on to.

It also features a wider array of buttons, including dedicated fast forward and rewind, skip forward and back, and stop buttons, as well as mute and channel/page up and down buttons. There’s no swipe pad, but rather a standard four-direction input with the OK button in the middle.

While the Button Remote from Function101 is definitely a lot easier to hold and use than Apple’s Siri Remote (not to mention half the price), it’s definitely missing a few features.

This is, at its core, a relatively standard programmable infrared remote that just comes pre-programmed for Apple TV and with Apple TV-centric buttons. But the fact that it only operates via IR means that you have to have a clear line of sight to your Apple TV. Apple’s remote uses Bluetooth for more reliable communication. You can fairly easily program the remote to control the volume and power on your TV or sound bar, which is nice.

There’s also no TV button. If you want to return directly to the Home screen, you’ll have to hold the Menu button down for a couple seconds. As you have to long-press the Menu button to send the TV button input, there’s no way to “double-click” the TV button, which is how you would usually bring up the app switcher. If you need to do that (to force-close a misbehaving app, for example), you’ll have to dig out your Siri Remote.

Of course, there’s also no Siri button or microphone either, so you can’t use Siri. I don’t get the impression that very many Apple TV users actually use Siri regularly, but they probably should; it’s quite well-tailored to the functions and the information you’d want on your TV.

It also operates on a pair of AAA batteries rather than being recharged via Lightning like the official remote. Some may actually prefer that.

A cheap fix until Apple gives us a better remote

There’s no much to say beyond that. The remote works fine. It’s comfortable enough, looks good but not up to Apple’s production quality standards, and gets the job done. You’ll miss out on Siri and the TV button, but those are fairly small annoyances.

If you can’t stand the Siri Remote and don’t actually use Siri all that much with your Apple TV, you will probably consider this $30 well spent. If, like me, you have a Harmony remote or something else that can control your Apple TV along with your other AV gear, this is a step backward.

Frankly, the only reason this product exists at all is because Apple has totally dropped the ball on its own Apple TV remote. Users have complained about it for years, but Apple hasn’t made it a priority to deliver something better. It’s strange to recommend what is honestly a rather mediocre and basic product solely on the staggering failings of the Apple’s design, but here we are.