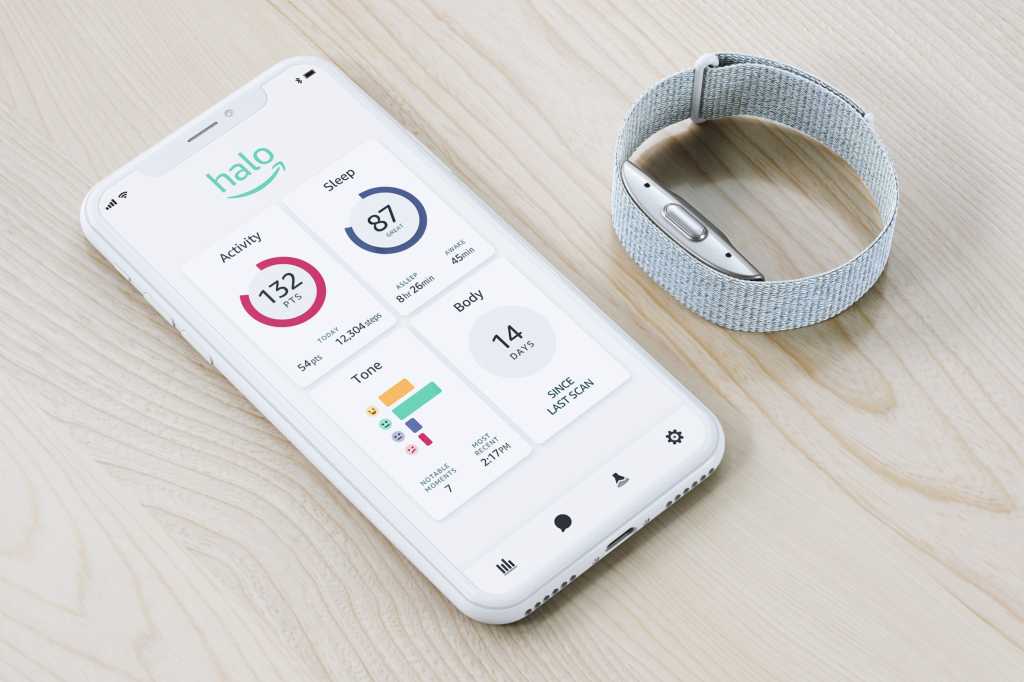 Amazon unveiled its first wearable on Thursday and it’s not what you think. Instead of a cheap smartwatch with Alexa, the Amazon Halo is a minimal wearable with no screen that’s designed to keep your body and your relationships healthy.

While the Halo connects to your smartphone, you won’t be using it to listen to music or get directions. It doesn’t have GPS or Wi-Fi or NFC. In fact, you won’t interact with it much at all. It has 50-meter water resistance so you can wear it while swimming and 7-day battery life so it can monitor your sleep at night. It has an optical heart-rate sensor for step and activity tracking. And like the Apple and Fitbit watches, the Halo also has a microphone.

However, while the microphone is constantly listening for your voice, it’s not to hear Alexa’s wake word. It’s to analyze the tone of your voice. As you go about the day wearing the Halo, it “uses machine learning to analyze energy and positivity in a customer’s voice so they can better understand how they may sound to others, helping improve their communication and relationships.” So now when your significant other tells you, “It’s not what you said, it’s how you said it,” you can go back and see what they mean. Amazon says Tone “works best for American English speakers” but isn’t limited by language and “is always getting smarter.”

The Halo’s other unique feature is body scanning. Powered by AI and machine learning, the Halo will calculate your body fat using your smartphone’s camera to create a 3D scan of your body. Then a deep neural network “identifies your body and separates it from the background with pixel-level accuracy” while the image “is analyzed by another DNN to understand the relationship between images of a person and the physical properties of their body, including body shape and distribution of fat and muscle.” And finally, “the shape and appearance of your body in the images is analyzed by a third DNN to generate your 3D body model.”

Amazon claims the Halo’s body fat measurement is “as accurate as methods a doctor would use—and nearly twice as accurate as leading at-home smart scales.” However, Amazon cautions that the system has reduced accuracy for customers over 500 pounds or who have 50 percent body fat, as well as pregnant women, people who use wheelchairs, and users with certain physical differences, such as prosthetic limbs.

There’s also a monthly service that unlocks Halo’s advanced features for $4 a month, though the first six months are included with purchase. Without it, you’ll only get basic steps, sleep time, and heart rate tracking, so it’s essential to the purchase and adds a recurring fee that most other smartwatches don’t have. Even Fitbit’s Premium service, which also unlocks extra data on its watches, brings extra services such as workouts, coaching, and personalized goals. The Halo service appears to simply be a way to keep the upfront cost of the device down.

But the biggest hurdle for the Halo’s success isn’t accuracy. It’s privacy. While you can turn off the Halo’s microphones, voice recordings are processed on the phone, and Amazon claims body composition images ”are processed in the cloud then automatically deleted so no one but you ever sees them,” users need to be willing to extend a certain amount of trust when using the Halo.

It’s also unclear who the target audience for the Halo will be. Are you supposed to wear it with another smartwatch? Is it a play for a partnership with a health insurance company? Do people really care what their voice sounds like to other people? With a variety of bands, is it supposed to be a fashionable accessory?

We’ll have to wait a little while before we get the answer to those questions. The device is available isn’t being sold yet, but you can opt for a chance to buy one during its early access period. It will sell for $65 while in beta but jump to $100 when the beta period ends, if it gets that far.