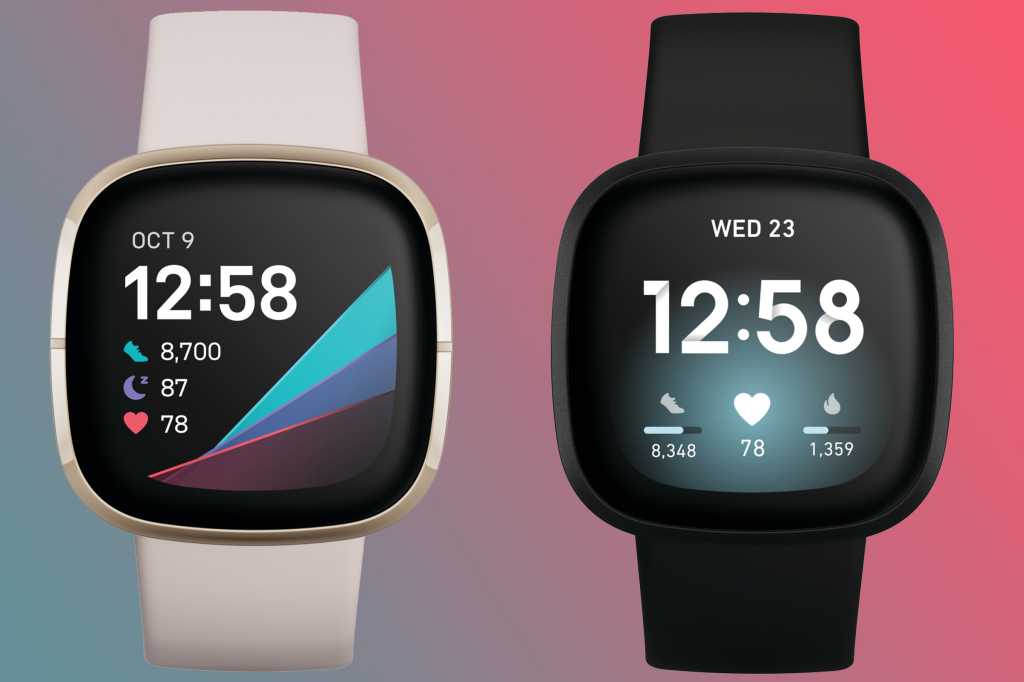 Fitbit has unveiled its latest lineup of devices, and there’s quite a bit of shuffling going on. The Ionic has finally been retired, the Versa 2 is suddenly in no-man’s land, the Inspire and Inspire HR have been replaced by a single model, and there are two new smartwatches at the top of the line: the $329 Versa 3 and the Sense. But with just $100 separating them, which of Fitbit’s new flagships should you buy?

Versa 3 vs Sense: Design and display

You’re not going to be able to tell apart the Versa 3 and the Sense. That’s because they have the exact same size and shape, which is slightly larger than the Versa 2.

In addition to the same body, the Versa 3 and Sense both have 1.58-inch 336×336 OLED displays, a little bigger than the Versa 2’s 1.39-inch screen. The Sense is about five grams heavier but you shouldn’t notice the extra weight on your wrist. They also come in similar colors, with both watches featuring a stainless steel body in either “soft gold” as well as a darker option (graphite for the Sense and black for the Versa 3). And they have a haptic button on the left edge rather than a physical one.

Like the watches and trackers that came before, the Versa 3 and Sense have swappable bands that connect differently than before, so older straps won’t work. But any strap made for the Sense will work with the Versa 3 and vice versa.

Versa 3 vs Sense: Connectivity and sensors

While they might look exactly the same, the Fitbit Versa 3 and Sense are quite different on the inside. First, here’s what you’re getting no matter which watch you buy:

That’s a nice set of specs, but the Sense is stuffed with even more, some of which we’ve never seen in a consumer smartwatch:

In the next section, we’ll take a look at what each of those sensors does.

While both watches will do the things that you expect a Fitbit device to do—step, elevation, calorie, sleep, and exercise tracking—the Sense has a few new tricks enabled by its next-gen sensors.

The Sense will be able to monitor your stress, track your body temperature while you sleep, and keep tabs on your heart rhythm all on your wrist. Here’s how they work:

Additionally, Fitbit Premium (available for $10 a month or $80 a year) unlocks even more data about your stress score. You’ll get detailed breakdowns of how the score is calculated, including “exertion balance (impact of activity), responsiveness (heart rate, heart rate variability, and electrodermal activity from the EDA Scan app), and sleep patterns (sleep quality).” A new Health Metrics dashboard will amplify the information the Sense’s sensors record, including “breathing rate (average breaths per minute), resting heart rate (an important indicator of cardiovascular health), heart rate variability (variation of time between each heartbeat), and skin temperature variations.”

Versa 3 vs Sense: Battery and charging

The batteries inside the Versa 3 and Sense are both rated for the same 6-plus days of use, but that comes with caveats. If you use the always-on display, and/or use GPS often, it won’t last as long. But for the most part, either watch will last far longer than an Apple Watch.

For charging, Fitbit finally has a charger that isn’t a clunky, awkward cradle. Both watches come with the same type of charger and it supports fast charging. Fitbit claims that a 12-minute charge will provide a full day of use, and a complete charge takes just 40 minutes, which is way faster than its previous chargers.

The Sense and Versa 3 are part of Fitbit’s family of smartwatches, so they both run the latest version of Fitbit OS, which has been completely redesigned to take advantage of the larger displays. It doesn’t have as deep of an app catalog as the Apple Watch, but there are plenty of good ones as well as a variety of clock faces.

There are also some new features on board. Fitbit has introduced new customizable widgets that are accessible by swiping up from the bottom, as well as redesigned notifications and on-screen apps, while also offering more personalization options. If you’re using an Android phone, you’ll be able to answer calls and reply texts using your voice, and you now have a choice of assistants, Alexa or Google.

If you’ve decided to buy a Fitbit smartwatch, the Versa 3 and the Sense are fundamentally identical aside from the Sense’s three additional sensors: EDA, ECG, and skin temperature. Granted, we need to test them to make sure they work, but Fitbit’s devices are generally rock-solid when it comes to fitness and health tracking, and the Sense is right in its wheelhouse. The Versa 3 is a great fitness smartwatch at a good price, but the extra $100 will be well spent on the Sense.