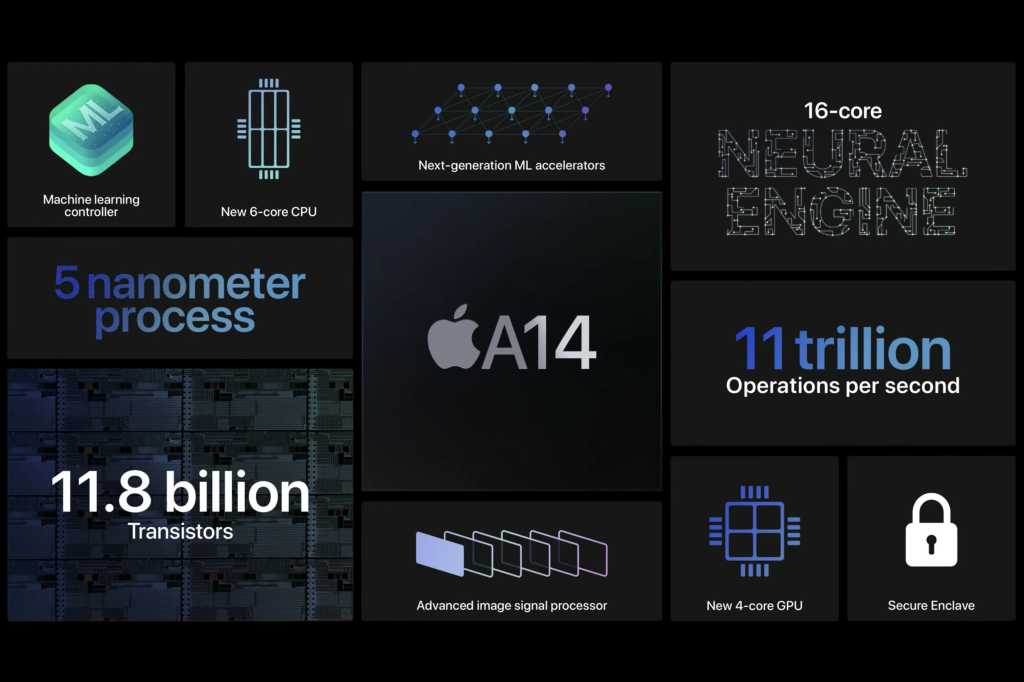 As it revealed the new iPad Air during its Time Flies event, Apple took the wraps off its latest mobile system-on-chip, the A14 Bionic. Built with a bleeding-edge 5-nanometer manufacturing process, it is Apple’s most advanced SoC ever and likely the fastest mobile chip on the planet.

Earlier this year, we took some educated guesses about what we might expect from the A14. Now that Apple has revealed a few details, this FAQ can tell you what this fantastic SoC is going to do for the Apple products in which it appears. As we get more information, we’ll update it.

Update 10/14/20: Apple has announced the iPhone 12 and iPhone 12 Pro, which use the same A14 announced together with the iPad Air.

As expected, Apple claims to be the “first in the industry” to make use of the 5nm process technology to manufacture chips. That means smaller chip features and more transistors in a given amount of area. It also typically means lower power consumption for a given amount of work.

The process allows Apple to stuff 11.8 billion transistors into the A14. That’s about 40 percent more than the 8.5 billion in the A13.

Still a six-core CPU, but faster

Just as in the A11, A12, and A13, you’ll find six CPU cores in the A14; two high-performance cores and four high-efficiency cores. Apple says the CPU has been given a “big update” in the A14, and that it runs more instructions in parallel.

Apple says the A14 has “large high-performance caches” that are “sized to meet the needs of the most demanding applications.” That probably means an increase in L2 cache over the 8MB in the A13, or perhaps even the introduction of L3 cache, which hasn’t been seen in an Apple SoC yet.

The A14 also features Apple’s newest GPU architecture with four GPU cores, the same number as in the A13. Apple says it is “scaled to deliver the maximum sustained performance at the lowest possible power.”

According to Apple, the new GPU delivers a 30 percent increase in graphics performance, with the disclaimer that it is compared to the “previous generation device” meaning the previous iPad Air’s A12. Apple said the A13’s graphics are 20 percent faster than the A12, so the A14 taking it another 20 percent is par for the course.

Since the A11 (the first Apple chip to carry the “Bionic” monicker), Apple has included a custom silicon block called the Neural Engine in its SoCs. This hardware is tailor-made to perform the kind of operations used in machine learning and AI calculations. In that chip, the Neural Engine performed 600 billion operations per second.

The A14 doubles the Neural Engine from 8 cores to 16, delivering an impressive 11 trillion operations per second. The matrix acceleration hardware in the CPU cores in now a faster “second-generation” design as well, through Apple has given no indication of what the differences are.

Much we still don’t know about A14

For all that Apple has revealed about the A14 Bionic SoC, there is still much left to learn. Modern mobile system-on-chip designs have lots of custom acceleration hardware: image signal processing for the cameras, video encoding and decoding, cryptography and encryption acceleration, storage and memory controllers, and more.

All of these things can have a meaningful impact on the experience of using our iPhones, iPads, and soon, our Macs.

Apple hasn’t revealed much about these things. We know the image signal processor is better because the iPhone 12 can do more with it, but we don’t know how much better and in what ways. The “Pro video” encode and decode labels on Apple’s sheet probably refer to the 10-bit HDR (with support for Dolby Vision) features we find in the iPhone 12.

We may yet learn more about the A14’s capabilities as developers get their hands on the iPad Air and iPhone 12. It’s possible that, if the first Apple Silicon Macs are based on a derivative of the A14, we’ll learn more about its underpinnings upon its release.