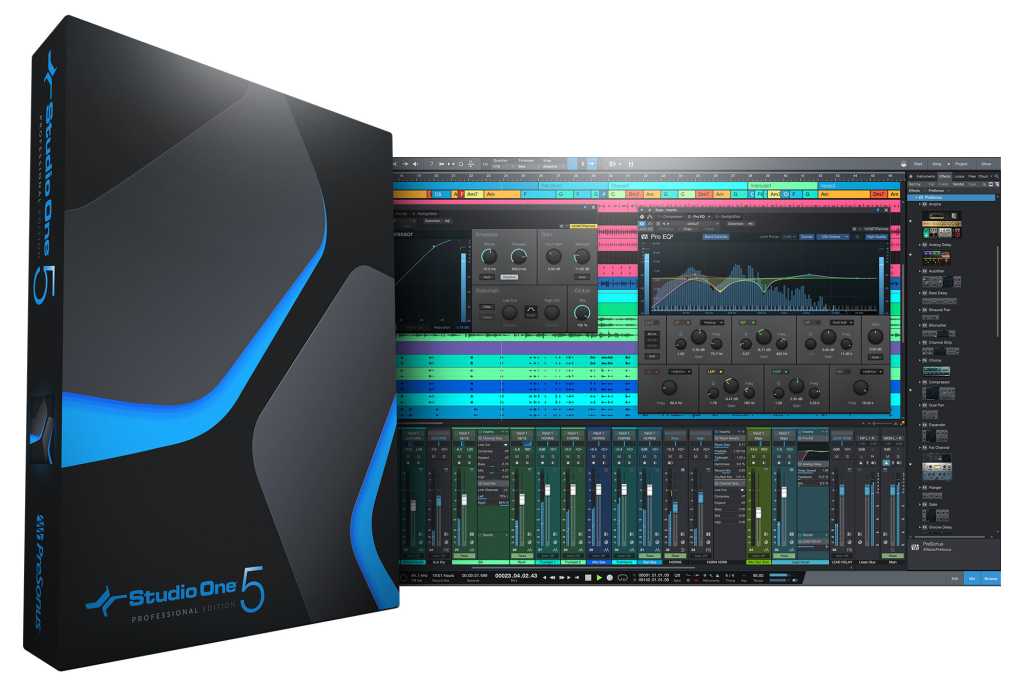 For sheer capabilities, this program almost matches Logic. The project/album mastering module alone is almost worth the price of admission alone, and for $15 a month, you can ignore that “almost”. The new Show page will interest those performing live with the aid of a computer. An excellent DAW, though parts of the the interface suffer from information overload.

Presonus Studio One Professional is a top-tier digtal-audio workstation (think Logic X) with some unique and time-saving features. My favorite feature, a super-handy module for organizing and mastering albums, has been joined in the new version 5 by a clever take on organizing and managing a live performance.

Presonus has also unveiled Sphere: an online service that delivers the entirety of the company’s music software portfolio as well as storage and collaborative feature for a remarkably affordable $15 a month. Even if you’re a diehard user of another DAW, that warrants a serious look at a very powerful suite of music tools.

By today’s standards, there’s nothing startling about Studio One’s design. However, at its inception in 2009, it was the first traditional track/mixer DAW to adopt a drag and drop, paned design—you drag effects and instruments to the timeline to add them to tracks (or create a new track). The various areas of the program (timeline, browser, editors, etc.) fit together without overlapping like panes in a window.

The original developers were also responsible for Nuendo, a surround version of the venerable and popular Cubase from Steinberg. I mention this as Studio One bears more than a passing resemblance to those in both appearance and approach.

The layout of the main window consists of an inspector panel and controls for the current track to the far left, track headers to the right of those, the timeline area for clips (which may be layered), then the browser to the far right. At the bottom is the mixing console which swaps out with the various editors: piano roll, drum, Melodyne 5 visual audio editing (a license is included) via ARA2, and new for version 5—musical notation courtesy of the company’s Notion 6 score editing software. Notion was already pipelined to Studio One for easy exchange of data.

You can float the editors as windows, and view the notation as such while the drum or piano roll are docked in the bottom pane. The changes in one editor are mirrored in the other in real time. Slick and highly useful. Dual monitors are also supported if you want to dedicate one display to mixing/editing and another to the track area.

As mentioned, where Studio One really sets itself apart from other DAWs is with its Project and Show pages. The latter is new for version 5 and is roughly akin to the mixing/automated performance software used to run modern stage productions.

With Show, you define “songs” that encompass “players” that can be anything from mixdowns of songs, to external hardware, to stacked FX used by live performers. There’s a section to create these “Shows” (seen above) and a streamlined interface for actual performance use as shown below.

Since day one (or version one, if you prefer), Studio One Professional has incorporated the Project page for organizing and mastering your mixdowns into cohesive sounding albums. It’s unique, and a colossal time-saver.

Click on the image above and take a closer look at the plentiful EQ and meter options. I know several users who’ve bought Studio One for the Project page alone.

Also, note the Start, Song, Project, Show buttons at the top of the image. These are how you navigate between Studio One’s pages/modules. When you’re in the song section, you’ll also see Edit, Mix, and Browse buttons at the bottom right. These partially control what you see in the bottom pane and show/hide the browser.

Note that Studio One also allows you to have multiple songs open and freely copy clips (not entire tracks, alas…) between them. Logic does this, but it’s buggy and not recommended by either Apple or anyone who’s tried it.

I do have one other favorite Studio One feature—the ability to stack VST instruments on the same track. This allows me to layer sounds from different sound sources without having to mess around with a sampler. Presonus also freely provides Studio One Remote for Android/iOS for, yes, remote control and operation.

I’ve already mentioned the various editors, but there are also a plethora of modal mouse tools: selection pointer, drawing pencil, cutting knife, etc. There are also extensive—and I mean extensive—context menus and key commands (user definable) that allow you to simply select objects and operate on them—my preferred methodology.

New for version 5 is MPE (MIDI Polyphonic Expression) editing. If you’re not familiar, MPE allows every note to have independent pitch, pressure, and timbre without resorting to assigning them to different channels (MIDI 1.x has 16 of these). That’s a primitive explanation, but Studio One handles MPE editing perfectly—highlighting the pertinent MIDI controller info for whichever notes you select.

Alas, Studio One 5’s proprietary instruments aren’t MPE-enabled yet, and for some reason VST3 instruments don’t currently work, only older VST2 types. I had to install Xfer Records Serum wavetable synth before the enable MPE option was available. Presonus is very good about updates so I expect a more universal solution in short order.

Ripple editing (stuff moves around with deletes/inserts), quantizing, time-stretching, transient editing, and the other advanced features functioned perfectly in my testing. That said, as with any DAW, if you visit the forums, you’ll find all sorts or reports on bugs, etc. I experienced only a single, non-replicable crash loading a VST.

Studio One might not have every feature you’ll find in Logic and Cuckos Reaper, but that can be said of many DAWs. The basics are more than adequately provided for, and if I have any complaints about the program, they concern the interface. I’ll get to that in a bit.

For version 5, Presonus has redone the look of some of its effects and updated more than a few of them. The changes are listed in the New Features section below. The fact is, they were plentiful and quite good to begin with, covering the gamut from EQs, to compressors, reverbs, delays, and just about everything in between.

If you visit the audio forums, you’ll find users arguing over the quality of this EQ or that, this compressor versus another, etc. Personally, I find the discussions a tempest in a teapot. Presonus plug-ins are generally top-notch and perfectly capable of producing professional results without resorting to third-party offerings. The same as with nearly all DAWs.

I won’t say the quite same for the virtual instruments. They are very good and cover most needs, but aren’t as plentiful as they are in Logic. They also aren’t quite up to the quality I experienced in the recently reviewed Universal Audio Luna—then again, no one’s are. Still, like Logic, Studio One’s instruments are all free while many of Luna’s are pay-to-play. Bottom line: if you can’t make music with the instruments, samples, and loops that ship with Studio One, find another line of work.

A major boon for starving (or simply cheap) musicians is that the $99 Artist version of Studio One now supports third-party VSTs without having to purchase an $80 add-in. Formerly, only Presonus’s own were allowed without the add-in—a major limitation for folks already married to favorite virtual instruments. There’s also a Studio Prime version that’s free though obviously, a lot of stuff is missing. You can compare versions here.

As I mentioned up front, there’s also the new Sphere service that includes the professional version of Studio One; my personal favorite notation program—Notion; collaborative features and 30GB of online storage; and all the plug-ins and add-ons that Presonus markets. At $15 a month, Sphere is a steal. Especially when you consider that Pro Tools is $35 monthly without all the plug-ins, and the perpetual license for Studio One 5 Professional is $399.

This is our first review of Studio One so I’ve stuck for the most part with the basics. Version 5 offers a number of new features I haven’t yet covered. Here they are along with some recaps.

An eyeful of an interface

As you may have noticed in the screen shots above, and especially the one just below, there’s an awful lot of stuff visible in Studio One at times. Much of it is similar, much of it is tiny, some of it is poorly delineated, and unlike with Logic, you can’t hide what you don’t want or need. You might love this. You might not.

I lean towards the “not” end of the spectrum, as the result of so much similar and tiny visual clutter is that my eye takes a long time to focus on the feature or tool that I need—even when I know its location. When I do find it, the icon is often so tiny that it requires very precise mouse movements.

These wasted seconds aren’t a massive burden when editing or mixing, but when I have an instrument in my hands and I’m trying to squeeze creative ideas out, it can really kill the vibe.

In fairness, Studio One is modeled after old-school mixing consoles, where everything, being corporeal, is always in plain sight. With intimate knowledge and lots of use, the everything-at-hand approach might save users time. Feel free to let me know what your experiences are.

There’s no denying Studio One’s power or scope. I have my gripes about the interface, but I have friends that think the GUI is the bee’s knees. Opinions on DAWs are like that, and Studio One has plenty of loyal, enthusiastic users.

The fantastic news for everyone is Sphere. Only need the Project or Show page for a month or two? You no longer need to fork over $400 for the perpetual license. Even struggling musicians can afford $15 for 30 days.

I’d be remiss if I didn’t also mention that Presonus sells some sonically excellent and fantastically affordable audio hardware. I’ve owned several of the company’s interfaces. You can read my TechHive review of Presonus low-end Eris E4.5 studio monitors here.