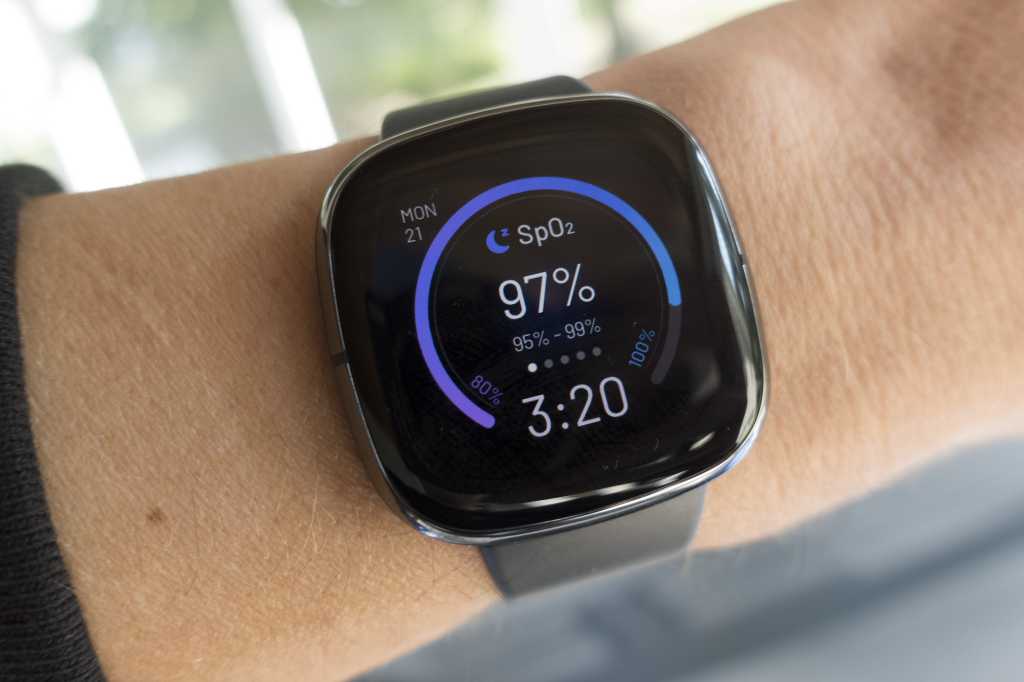 Ever since the Blaze launched its first watch-sized tracker with a color screen just months after Apple unveiled its first Watch, Fitbit has seemingly been happy to be the “other” smartwatch maker. From the fitness-focused Blaze to the smart Ionic and smarter-still Versa, Fitbit has carved out a wearable niche by embracing its second-fiddle status, offering a simpler, streamlined, and cheaper alternative to Apple’s trendsetting wearable.

The Sense is Fitbit’s attempt to break that mold. Its squarish frame and swappable bands still look a lot like the Apple Watch, and the screen has rounded corners now to match. Its new fast charger is magnetic like Apple’s puck, and the strap system has been upgraded to be closer to Apple’s quick-release button. And the inductive button is trying to be as simple and distinctive as Apple’s Digital Crown.

But aside from its somewhat derivative looks, the Sense has a lot going on inside its 48 x 40.48 x 12.35mm frame. Fitbit calls it its most advanced health smartwatch and it’s not hyperbole to say the Sense is actually the most advanced consumer wearable on the market right now. Along with a new Sp02 face powered by its blood-oxygen sensor and a second-generation Pure Pulse 2.0 heart-rate sensor, it has multipurpose electrical sensors for measuring stress (EDA) and heart rhythm (ECG), a skin temperature sensor for tracking variations in body heat, and world-class sleep tracking.

I’ll post a full review later this week, but spoiler alert: The Fitbit Sense is trying too hard. It’s not so much that the Sense’s various apps and sensors don’t work—for the most part, they do what they’re supposed to do, though I wasn’t able to test the new ECG sensor yet. That said, nothing about the Sense experience feels as frictionless and effortless as Fitbit’s previous smartwatches.

The price is the biggest obstacle. To get the most out of the Sense, you need an $80 per year subscription to Fitbit Premium, which keeps the $330 entry price just low enough to entice Apple Watch Series 6 buyers who may balk at the $399 price tag. Fitbit provides a six-month free trial with every Sense purchase—and in a statement late last night, the company said it is “looking at ways” to at least open up the Health Metrics Dashboard that breaks down breathing rate, SpO2, and HRV “in the coming months.” But this only serves to show how necessary the Premium service and app are to the watch’s core functions.

Even if you don’t mind paying for Premium, a lot about the Sense feels like it was built to directly respond to the Apple Watch rather than forging its own path. And unfortunately, it’s the Sense, not the Apple Watch, that will suffer the most.

It’s in the blood

The Apple Watch Series 6 brings just two main enhancements over the Series 5: a blood-oxygen sensor and a brighter always-on display. Neither is particularly innovative or unique, especially when you consider that Fitbit has been shipping watches with Sp02 sensors since 2016. So the Sense should have hit the ground running and neutralized the Series 6’s premier feature.

But despite a four-year head start, the Sense’s Sp02 tracking still feels rushed. Fitbit has only recently begun using its Sp02 sensor in a visible way. The company previously used the sensor as a way to augment its sleep monitoring by tracking the estimated oxygen variance as a way to pinpoint fluctuations rather than an actual reading. In other words, it could help identify sleep apnea issues. This feature was relatively invisible to most users who didn’t dig into their sleep scores to find it, but now Fitbits with Sp02 sensor can deliver a daily score on your watch face each morning.

Indeed, just days before Apple launched its newest watches, Fitbit released the Sp02 Signature clock face for its own smartwatches, which display your nightly blood-oxygen saturation level on a small circular graph. It’s not as instantaneous or effortless at Apple’s implementation—you’ll need to wait roughly an hour for your score to appear and you need to make sure you wear the watch to sleep and have the new Signature face active. But it’s a big step toward bringing the Fitbit blood-oxygen sensor to the forefront for people who might not have even known it was there.

Still, from the timing to the somewhat slipshod implementation, it’s hard not to see the Sp02 sensor’s new trick as a direct response to the Apple Watch Series 6. You didn’t need to be a clairvoyant to see that a blood-oxygen sensor was going to be the premier feature of Apple’s latest watch, and the Signature face smacks of a me-too move. Fitbit is also promising to deliver additional Sp02 clock faces and accessible metrics, as well as integrating readings into the other heath and fitness stats.

If Fitbit didn’t think blood-oxygen readings were important to deliver before, it’s hard not to conclude that the only reason why we have it now is that Apple added its own Sp02 sensor. And, besides, Apple’s 15-second on-demand readings on the Series 6 blow away the Sense’s clunky readings anyway.

The Sense sensors that Apple Watch doesn’t have are slightly more successful, but like the Sp02, they’re not as seamless as they could be—or probably would be on an Apple Watch. Fitbit’s skin-temp sensor is most interesting in the age of COVID, but it’s not exactly an out-of-the-box experience. You’ll need to wear your watch for at least three nights to establish a personal baseline, and then the Sense will only show your nightly variations during sleep, much like the Sp02 sensor. Most people aren’t going to know where to find or what to do with their numbers, and any deeper analysis is again tied to the Premium sub.

The most interesting sensor on the Sense is the EDA sensor that measures electrodermal activity response in your palm “to detect small electrical changes in the sweat level of your skin” and calculate a Stress Management score. It’s definitely an achievement for the Sense, but the implementation feels very much like a work in progress.

For one, it’s not a fast process. Even the quick scan requires you to hold your palm over the face for 2 minutes, which is about a minute and a half longer than I usually spend with my smartwatch at any given time. You can get a partial reading in 30 seconds, which is what most people will get since It’s hard to know if it’s actually working because your palm is covering the screen. You’ll get a bit of haptic feedback when it’s done, but unless you’re looking at a clock, you’re going to wonder if your Sense is actually doing anything. And when it’s done, you’ll only get the most basic of results on your wrist, with the in-depth info available in your Stree Management Score inside the Fitbit app. And Premium users will get more useful Mindfulness-related insight in the way of additional metrics and stress-relieving exercises.

It’s the kind of feature that feels gimmicky now, but it’ll be much more useful in a year or two. As it stands, the whole point of the EDA app is to bring awareness of how to lower your stress score (or rather, raise it, since 100 means you’re stress-free), which Fitbit was already doing with its Relax app and other sensors. The EDA sensor doesn’t really add anything to the equation other than being a thing that Apple Watch doesn’t do.

Add it all up and you’ve got Fitbit’s most expensive wearable by a wide margin. At $330, it already costs $100 more than the Versa 3 and just $70 less than the Apple Watch Series 6. And when you add in Premium, the Sense will cost more after the first year. That would be fine if it delivered an experience akin to the Apple Watch, but apart from the new sensors, the Sense isn’t as smart, stylish, or sophisticated as the Apple Watch. And at $330 before you add the Premium subscription, it’s not all that much cheaper, either.

Update 9/24: Clarified the way the EDA app integrates with Premium and added information about the Sp02 readings.