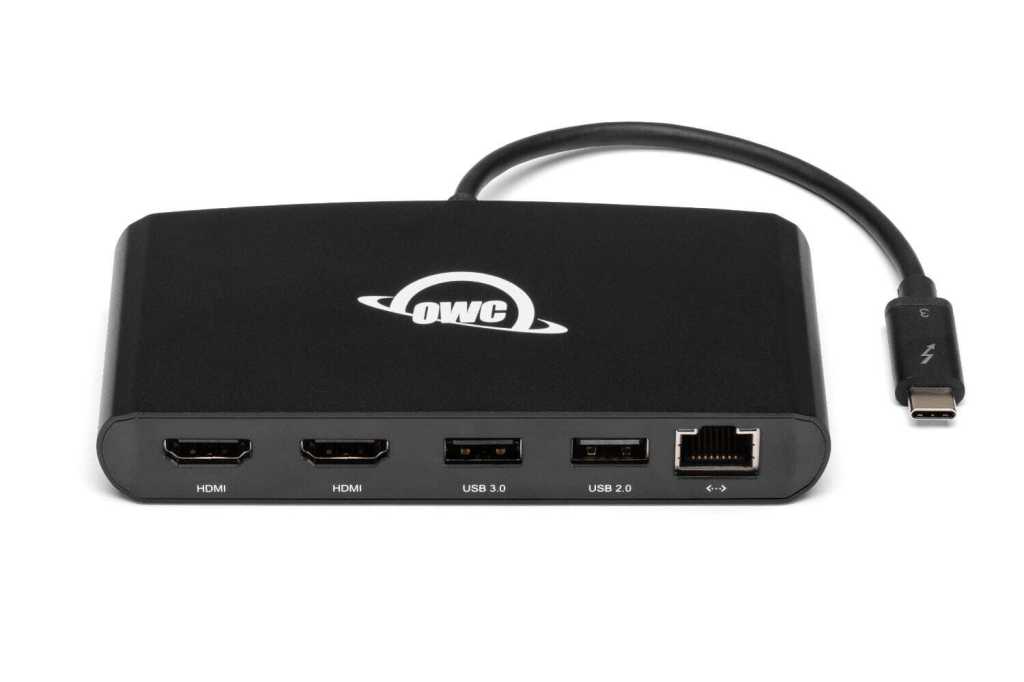 For $119, the OWC Thunderbolt 3 mini Dock is the best way to add two 4K HDMI ports, gigabit Ethernet, and USB without purchasing a full-on dock.

Docks abound for USB-C connectors, whether for USB-only devices or for those—like all Macs released in the last few years—that sport the very high-speed Thunderbolt 3. The Other World Computing Thunderbolt 3 mini Dock offers the lowest price so far for offering support via Thunderbolt 3 for two 4K displays. If you need to add two displays and want to preserve USB-C ports, then this dock fits the bill.

The two HDMI 2.0 ports can each handle up to 4K video at 60Hz. You can also use HDMI adapters and cables to work with other compatible standards, like DisplayPort.

The dock includes just three other ports: one high-speed USB 3.0 (Type A), one USB 2.0 (also Type A), and gigabit ethernet, which tested at gigabit speeds even with all ports occupied, as it should. However, I was unable to get the ethernet port to appear immediately on my Mac, which may be related to previous Thunderbolt docks used with the computer. After a standard restart, however, the ethernet interface appeared as expected in the Network preference pane and tested perfectly.

The USB 3.0 port is a reasonable replacement for taking up a somewhat faster Thunderbolt 3 slot on your Mac. Any purpose that requires Thunderbolt 3 full data rates would be one you’d want plugged directly in the Mac, in any case. OWC suggests the USB 2.0 port is a good solution for keyboards and mice, where throughput isn’t an issue.

It’s worth nothing the 3.0 port supplies only up to 0.9 amps (4.5 watts at 5 volts), which is enough to charge iPhones and other devices, but may not be enough power for some bus-powered external drives. Check your drive’s specs before attaching. The USB 2.0 port has just 0.5A (2.5W) available, which is fine for its intent.

The size, shape, and construction of the dock is top notch. With a metal case and 7-inch integral USB-C “tail”, it works well with both desktop and laptop Macs. While compact, the dock separates ports well enough that they are all usable likely without special cables. The one exception might be with an HDMI cable that has excessive plastic or rubber molding around its plug, though that’s rare.

With two displays plugged in and ethernet running full tilt in testing, the dock did heat up, though it wasn’t uncomfortable to touch. However, I’d be sure to place it on a surface that took advantage of its rubber feet on the bottom and not put items on top of it.

The only Mac with USB-C that this dock won’t work with is the discontunued 12-inch MacBook model, which had just USB support and not Thunderbolt 3.

The so-called Quick Start Guide included with the dock provides some basic information, including how to contact technical support, and a link to where to find the full manual online. However, because of a number of specifics it’s worth knowing about when using the dock, the single-sided sheet could easily have also included a summary of provisos—like resolutions supported, USB power limits, and the like—instead of asking a buyer to hunt for a PDF.

One note about the manufacture. OWC doesn’t make this dock. Instead, as is often the case except for major equipment companies, this is a “white-label” product designed and manufactured by a company that specializes in creating electronics that it labels for other companies. OWC puts its name on it, chooses its retail price, offers it for sale, and provides customer and technical support. A similar model of this dock has been available since 2018, including a version from CalDigit that currently costs $10 more. At OWC’s price, the set of features is even more of a bargain.

If you have want to add two 4K displays at the lowest cost and conserve USB-C ports, the OWC Thunderbolt 3 mini Dock offers the right set of options.