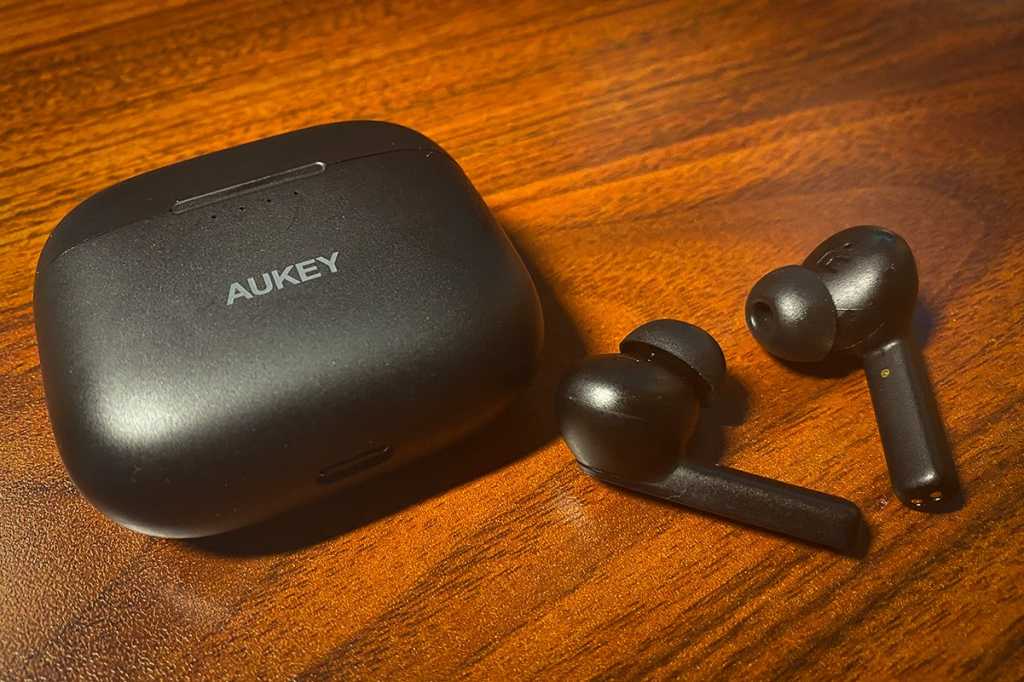 Not too long ago, you would have been right to doubt the quality of any true wireless earbuds with active noise canceling selling for less than $100. The $60 Aukey EP-N5 thus serve as a pleasant reminder that the technology is no longer as out of reach as it once was. These buds still fall short in features like mic quality and water resistance when compared to pricier competition from the likes of Apple, Samsung, and Sony, but they’re worth checking out if you’re hunting for good sound and decent ANC above all else.

From a distance, the EP-N5 earbuds look even more expensive than they actually are, in part because the design of both the case and buds pulls so heavily from Apple’s AirPods and AirPods Pro—save for the fact that they only come in black. The difference in build quality is more apparent once they’re actually in your hands, as Aukey crafted them with a lightweight plastic that doesn’t feel super durable but does help keep them comfortable when worn for hours at a time.

The case itself is a smooth and pocketable little thing, which grants around 35 extra hours of play on top of the seven or so hours you’ll get from the buds themselves without ANC flipped on. With the ANC on, unfortunately, the buds’ battery life drops to roughly four hours, especially if you like listening to music at high volumes. On the bright side, a row of four LED lights on the front of the case keeps you updated on how much juice the case has left, and the USB-C charging port ensures that you should easily be able to find another cord to charge it with if you can’t find the short cord that comes in the box.

Pairing is easy, too: I just opened my phone’s Bluetooth menu, pulled out the right bud and put it in my ear, heard a British female voice say “Pairing,” and pressed the Aukey EP-N5 prompt when it appeared. You can pair them with two devices, too, although you’ll have to disconnect them from one device before you can use the earbuds with another.

But the Aukey EP-N5 really showed their worth when I cranked up my music—not too much, though, because these things are loud. I tend to turn up the volume to maximum levels with most of my other earbuds, but I found myself wincing when I tried that with these. I did notice a few drops even when I was simply carrying my phone in my pocket, but for the most part the Bluetooth 5.0 tech keeps the music quality fairly consistent. I had to get around 30 feet away and put two brick walls between me and my phone before the signal started dropping significantly.

The EP-N5 sound surprisingly good, too. The middle ranges aren’t as clear as I’d like, but these buds handle low ranges well and don’t slouch with the highs. The mileage varies depending on the power of the bass, though. Billie Eilish’s thumpin’ track “Bad Guy” sounds great on these buds, for instance, but I can barely feel the drums on The Rolling Stones’ “Sweet Virginia” at all. It’s a good thing that they sound so well out of the box, as there’s no way to customize the equalizer with an app.

The catch? You’ll need to figure out which of the three sets of ear tips fit you the best as soon as possible, as getting good bass from the EP-N5 depends heavily on having a tight seal. Fortunately, the tips themselves stay tight once they’re in place, even to the point that I never worried about them slipping out during jogs through the neighborhood. On that note, their IPX5 water resistance rating makes them serviceable companions for workouts. Judging from the build quality, though, I wouldn’t actively try subjecting them to anything wetter than general sweat or the occasional rainshower.

You’ll also want to experiment with the ear tips to get the most out of the active noise cancellation, which isn’t as powerful as what you’ll get from pricer models. Still, it works well enough that my desk fan gets noticeably quieter when I switch on the ANC, even if it doesn’t fully mute the sound as some earbuds do.

The ear tips fit so well, in fact, that they offer substantial passive noise cancellation on their own, even to the point that I almost always had to remove the buds if I wanted to have a conversation with someone nearby. It left me longing for the “transparency” or “ambient” modes found in pricier earbuds, but I’m not surprised by their absence in earpieces this affordable.

The limitations of the Aukey EP-N5 really start to show up when using the touch controls. The buds are responsive to the basic action of tapping once on the left or right bud to pause music, but they struggle to differentiate more complex actions. Often when I tried tapping three times to activate my voice assistant, the buds would think I was either tapping twice on the right bud to skip a song or twice on the left bud to replay a song. Making more deliberate, slower taps doesn’t help, either, as the buds think I’m simply trying to play or pause the music. Worst of all, sometimes nothing happens at all.

Still, I found these quirks livable for the price, as I mainly only use the play and pause actions on my earbuds anyway. Instead, it was the dual microphones that really let me down, as they make me sound as though I’m talking through a walkie-talkie regardless of whether I’m recording voice memos or making calls. At least the audio never cut out. One perk of the dual-microphones setup is that you can make calls with just the right earbud if you wish. Unfortunately, you can’t use the left microphone on its own.

For just $60—and often less on Amazon—the Aukey EP-N5 offer far better sound quality and active noise canceling than we’d normally expect from earbuds in this price range. If you’re fine with that, they make a great budget pair. But just keep in mind that  the price comes with some sacrifices, including poor microphone performance and fiddly touch controls.