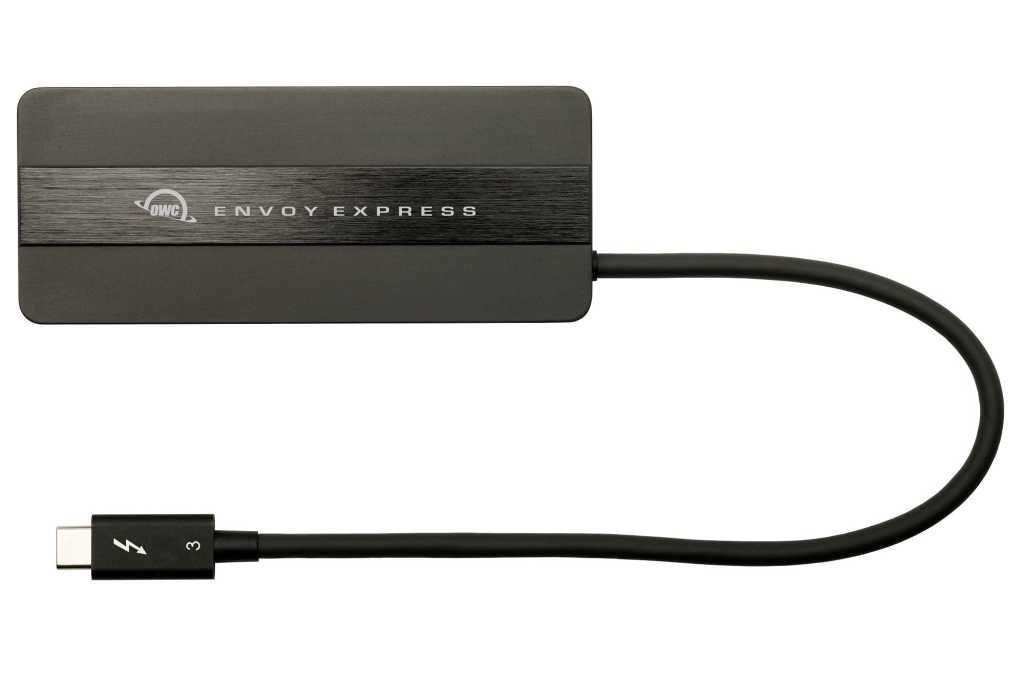 OWC
At a glance

This $79 enclosure lets you leverage your own NVMe SSD to create fast Thunderbolt 3 external storage. It’s not the fastest we’ve tested, but it’s plenty fast enough and gets you out of the store for not a lot of cash.

You may have noticed that external SSDs from top-tier vendors are pricey—especially when they’re Thunderbolt. If you’re looking to lessen your financial pain a little, then OWC’s $79 Envoy Express T3 (Thunderbolt 3) enclosure might be just what the doctor ordered. Populate it with a budget M.2 NVMe SSD, and you’re on your way to external storage nirvana for a very reasonable price.

The kicker? A clever caddy that adheres (semi-permanently) to your computer, laptop, or display and allows you to keep the drive handy, but securely in place and out of harm’s way. See below.

The Envoy Express measures approximately 4.1 x 1.6 x 0.5 inches, and weighs around 3.3 ounces—including SSD. The metal case is all black with a brushed-metal stripe down the middle bearing the name and OWC logo.

Though shown in the image below, no SSD is included with the Envoy Express. This is simply an an exploded view to show you where and how the drive mounts. The only thing not displayed is the included screwdriver.

The enclosure ships with a short Thunderbolt cable which is captive when the cover is screwed to the drive, but may be removed when the cover is off (as shown above). This makes the cable super easy (if not cheap) to replace should it wear out, or you need a longer one.

Beyond that, there’s not a lot to say about the Envoy Express. As menitoned previously, OWC includes a sturdy, clear plastic caddy that the enclosure itself slides in and out of. The caddy has semi-permanent adhesive on the back so you may mount it on the back of your laptop or iMac, or any other computing device, display, etc. This keeps it out of the way yet still handy. Nice touch.

I largely tested the Envoy Express using a 1TB Aura P12 M.2 NVMe SSD provided by the company and while it didn’t quite reach the 1533MBps OWC states is possible, it was still very fast.

Of course, I was curious to see how it performed with a top-of-the-line drive, so I threw a Samsung 980 Pro inside. That got me the performance that OWC claimed with the Aura P12 Pro, but no more. A top of the line 980 Pro is very much a waste of money in this circumstance.

As you can see below, the Samsung X5 pulled much better numbers under Disk Speed, but these don’t really bear out on the real world as you’ll see in the next image.

While the Envoy Express’s performance in our real world 48GB transfer tests couldn’t match the Samsung X5, keep in mind it’s a lot cheaper. It still matched up nicely to the more expensive  Fledging Shell Thunderbolt with a Samsung 970 EVO inside, and the Sabrent XTRM-Q (Thunderbolt 3/USB) with its Sabrent Rocket X 8TB SSD.

To reiterate, as the Envoy Express seems limited to just over 1500MBps, populating it with a top-tier SSD is largely a waste of money.

The Envoy Express isn’t the fastest Thunderbolt 3 storage solution available, but it’s still darn fast, and you can leverage budget NVMe SSDs for the most affordable solution I’m aware of—around $200 for 1TB compared to the Samsung X5 at $400. The caddy is also a very nice touch.

Thunderbolt 3 without breaking the bank. Who would’ve thunk it?