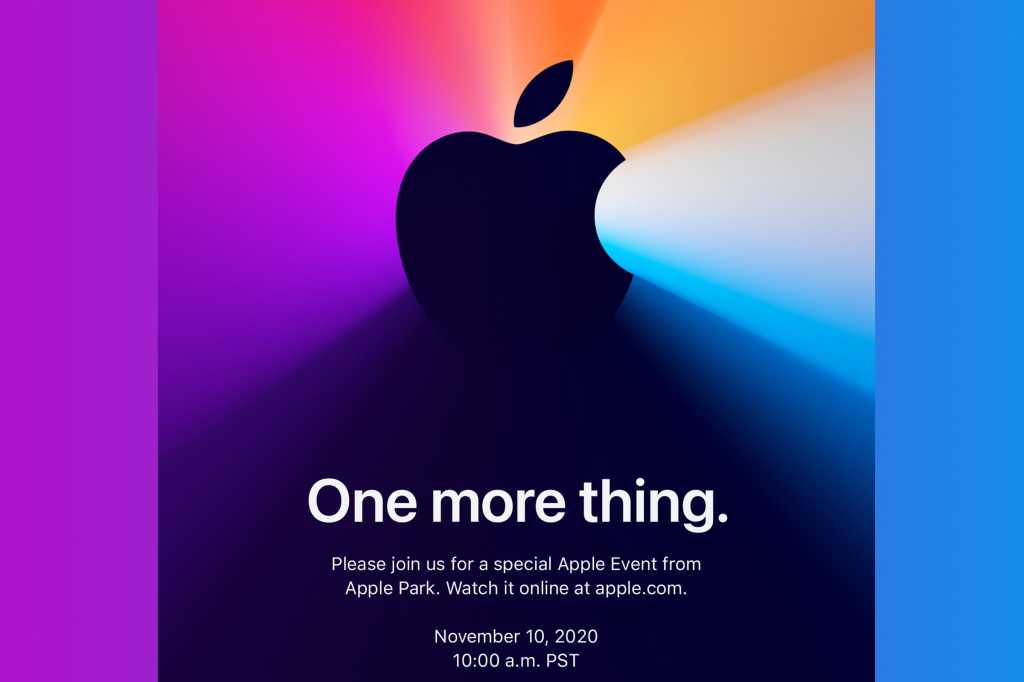 Apple has one more thing to show us before 2020 is up. In an invitation to members of the press Monday morning, Apple announced that it will hold its third event of the fall on Tuesday, November 10 at 10 a.m. PT, where it’s been widely rumored that new Macs with Apple silicon-based processors will make their debut.

As usual, there are few clues to speak of in the invitation, which consists of Apple’s trademark rainbow of colors shining behind a black Apple logo, but the phrase “one more thing” has a long history at Apple’s keynotes. Steve Jobs used the phrase to tack on surprise announcements to the end of presentations, including the Power Mac G4 Cube, iPod shuffle, and the MacBook Air, while Tim Cook used the tagline to unveil the Apple Watch, Apple Music, and the iPhone X.

Apple previously used held a “One more thing” event in fall 2005, where Jobs unveiled the 4th-gen iPod with video and a new iTunes service to sell TV shows and videos.

We’ll have to wait and see whether Cook actually has “one more thing” to show us at the event, but the tagline is a clear reference to the fact that Apple has already held two events this fall, one to launch the Apple Watch SE and Series 6, and another to unveil the iPhone 12. A third event was widely rumored and expected since Cook already promised that the first Mac with Apple silicon would launch by the end of the year.

Apple announced the transition from Intel to Apple silicon at WWDC in June, but there’s a lot we don’t know about the next generation of Mac computers, including speed, battery life, and connectivity. Rumors have suggested that the first Macs to arrive will be lower-end MacBooks and iMacs, though some have predicted the MacBook Pro could get an update this year too.

Otherwise, we could see AirPods Studio, Apple’s long-rumored over-ear headphones, as well as AirTags, which were expected to launch as early as last year.