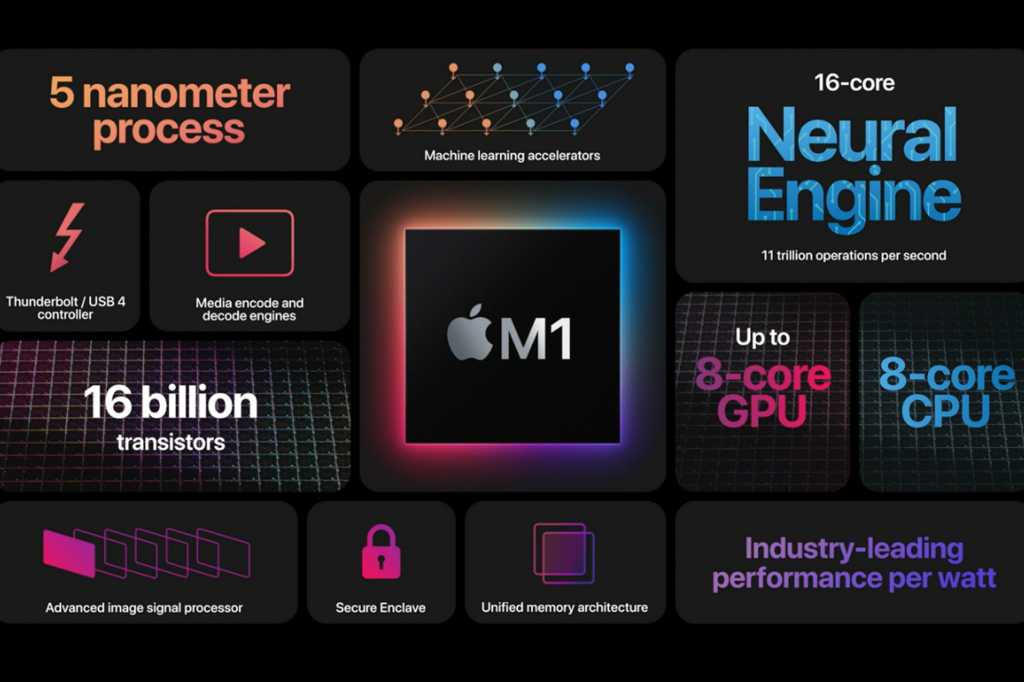 Macs have undergone a big change since last June. Announced at WWDC 2020, Apple is switching its internal architecture from one that uses Intel CPUs, third-party graphics processors, and other parts, to the company’s own “system on a chip.” The first Apple silicon SoC for Macs is called the M1.

It’s a big step for Apple and the Mac. But what does it mean for you? In this article, we cover frequently asked questions about Apple’s system on a chip, what it means to the user, how it affects what software you can use, and how fast it really is. We will regularly update this article with news, reviews, testing, and releases, so continue to check back.

We’ve tested and reviewed all of the M1 Macs and are very impressed with the results. Here are our reviews:

What is the Apple silicon M1 system on a chip?

“Apple silicon” refers to the chips Apple makes. In the Mac, they replace the Intel processors they have used for the past 14 years, and will eventually also replace the AMD graphics processors in higher-end Macs. Apple silicon first made its appearance in the original iPad.

The M1 is Apple’s first Mac chip. Here are its specifications:

Apple calls this a system on a chip (SoC) because it takes several components that are usually separate and puts them all on a single chip. This includes the CPU, graphics processor, USB and Thunderbolt controllers, Secure Enclave, Neural Engine, image signal processor, audio processing hardware, and more. This results in better performance and battery life. Read all about Apple’s claims about the M1’s performance and battery efficiency.

What Macs use the M1 chip?

Apple decided to initially release its own silicon in its more affordable Macs that are popular with general consumers. These Macs are:

Apple’s recently launch iPad Pro line (11-inch and 12.9-inch) use the M1 chip as well, with the same RAM and a single Thunderbolt port.

Apple announced a two-year transition, meaning that within two years every Mac will have chips of Apple’s own design. So more Macs with Apple silicon are coming.

Not with these first models. The amount of memory in the M1 Macs is a point of contention for some customers, especially those who are used to the practice of having as much RAM as they can in order to do their work.

Apple’s pricier Macs still use Intel processors (including the more expensive 13- and 16-inch MacBook Pro, and the $1,099 Mac mini). These Macs are bought mostly by power users who do demanding work.

It’s not that Apple’s M1 can’t handle the workload. It can, but the users of these Macs want more RAM, more powerful GPUs, and other features not found on the M1 Macs. Apple is not ready with silicon that will replace the Intel processors in these more expensive Macs.

Apple said its silicon rollout will occur in a two-year period, so the M1 is just the start. Apple will eventually outfit all of its Macs with its own silicon, and Intel processors will be completely phased out. Learn more about Apple’s transition from Intel to Apple silicon.

Apple said it will continue to provide to support its Intel Macs even after its Mac product line has fully switched to Apple silicon. Apple has sold millions of Intel Macs over the years and it knows that many of its customers use their Macs for a long time. Eventually, Apple will stop supporting Intel Macs, but that will not happen for several years.

You can probably expect new versions of macOS, and their accompanying apps, to be made available for Intel-based Macs until at least 2024, and official Apple technical support will extend far beyond that.

But I shouldn’t buy one, right?

In our reviews of the M1-equipped 24-inch iMac, MacBook Air, 13-inch MacBook Pro, and Mac mini, we saw tremendous performance. They’re definitely quite a lot faster than their Intel counterparts. And with the laptops, the battery life extends hours and hours beyond what was previously found in Intel-based models. If you’re considering a lower-priced Mac, it’s hard to argue against the new M1-based models.

The Intel Macs are still good performers, though. If the Mac you are considering has an Intel processor, you do not need to rule it out. They are good computers.

However, if you are not in a rush at all, you’ll want to wait and see what Apple will offer in its other Macs. Bloomberg reports that we could see more Apple silicon Macs starting in the fall of 2021. According to the report, Apple silicon will make its way into upgraded versions of the MacBook Pro, the iMac, the Mac Pro, and that the next Apple SoCs will be “more ambitious than some industry watchers expected.” Learn more about Apple’s plans for Apple silicon Macs in 2021 and 2022.

Will my software run on an Apple silicon Mac?

There are a few circumstances where your software may not work. If you are using an app that has not been updated in a long time, it may not work. If you have custom-made software, there could be issues. If you are still using an app that was discontinued, there is a chance it will not run. Most of the initial compatibility problems seem to stem more from apps that were not updated to support macOS Big Sur, which ships on Macs with the M1.

Before buying an Apple silicon Mac, it is a good idea to check with the developers of your favorite apps for compatibility. The status of your software can help you determine whether you can invest now or you should wait. For example, as of this writing, Avid Pro Tools, a popular audio editing suite, is technically compatible with Apple silicon and macOS Big Sur under Rosetta, but the company warns that “third-party plugins and other programs” may be incompatible and Pro Tools HDX and Pro Tools HD Native are not supported.

The website Is Apple silicon ready? maintains a list of software and their levels of compatibility. You can see if an app has a native version, works in Rosetta2, or does not work at all

Can you explain native vs universal?

Software is created with specific hardware in mind. In the past, software was made for Macs with Intel processors, which use the x64 instruction set. Now, software needs to be created for both Intel and Apple silicon (which uses the ARM instruction set) in order for the software to work efficiently and properly for each platform.

There are a few terms bandied about to describe the platform software is created for. Here are those terms and what they mean.

Do iPhone and iPad apps work on Apple silicon Macs?

They can. It is up to a developer whether they want to make their apps available for the Mac. To see if an iPhone/iPad app is available, check the App Store on an Apple silicon Mac. (iPhone/iPad apps do not appear in the App Store for Intel Macs.) If you already paid for an app for your iPhone/iPad, you do not have to buy it again.

Since the Mac doesn’t have a touchscreen, Apple has Touch Alternatives to help you use an app; for example, you use the Mac’s arrow keys to perform a swipe. iPhone apps run at a fixed window size, while some iPad apps are resizable.

What version of macOS do Apple silicon Macs work with?

These new Macs come with macOS Big Sur, which is version 11 of the Mac operating system. They do not work with previous versions of macOS.

This could be an issue for users who prefer to use an older version of macOS. For example, some users continue to use macOS Mojave because it is the last version to support 32-bit software. In this situation, you need to upgrade those 32-bit apps to 64-bit versions, or find 64-bit replacements before you can go with an M1 Mac.

As of this writing, Boot Camp does not work with Apple silicon Macs, so you can’t boot into Windows. Apple has said that these Macs can do it, but you would have to use Microsoft’s ARM version of Windows. Microsoft’s license currently does not allow for installation on a Mac, so it’s up to Microsoft to decide to do it.

As for the virtualization method, Parallels version 16.5 has support for the M1, but you can use only the ARM version of Windows. UTM is now available in the App Store ($10) and it will allow you to run ARM operating systems on M1 Macs. VMware announced that they are working on compatibility. CodeWeavers’ CrossOver virtualization works, according to the company. CrossOver doesn’t emulate the Windows OS, though. It allows the Mac to run software that was made for Windows. The developers of Wine are working with CodeWeavers to add a Windows compatibility layer to Wine 6.0.1. No announcement has been made about VirtualBox.

How do I transfer my data from an old Intel Mac to a new Apple silicon Mac?

This procedure has not changed because of Apple silicon. We have a guide that explains the ways you can quickly move everything from your old Intel Mac to your new M1 MacBook.

Will my hardware devices and accessories still work with Apple silicon Macs?

If you are using USB-A to USB-C adapters or a hub, they should still work. Wireless devices on the new Mac can use the same wireless connection you have been using on the old Mac. If you are using high-end production equipment, check with the device manufacturer about compatibility before you invest in a new Mac.

Can I use my case/cover/bag with Apple silicon laptops?

The M1 chip: What’s ahead

Will Apple release SoCs faster than the M1?

Bloomberg reported that Apple is working on Apple silicon that has 10 cores, with 8 performance cores and 2 efficiency cores, along with a 16- or 32-core graphics processor, support for up to 64GB of RAM, and an improved Neural Engine. It could be called the M1X and end up in the 14- and 16-inch MacBook Pro and the high-end Mac mini. It may not be available until the end of 2021.

What else is in the works?

In the same report, Bloomberg said that Apple is also working on an SoC for the Mac Pro with 20 or 40 processing cores, with 16/32 performance cores and 4/8 efficiency cores. This SoC will also have a 64-core or 128-core graphics processor. It likely won’t be available until next year.

What machines will run the new faster chip?

Apple has several machines in the pipeline for the next round of Apple silicon chips. The purported M1X will likely make its way into the 14-inch and 16-inch MacBook Pro, Mac mini, and MacBook Air refresh, while the higher-end chip will most likely be reserved for the Mac Pro, iMac Pro, and other high-end machines. They will likely start arriving in the fall of this year and extend in 2022.