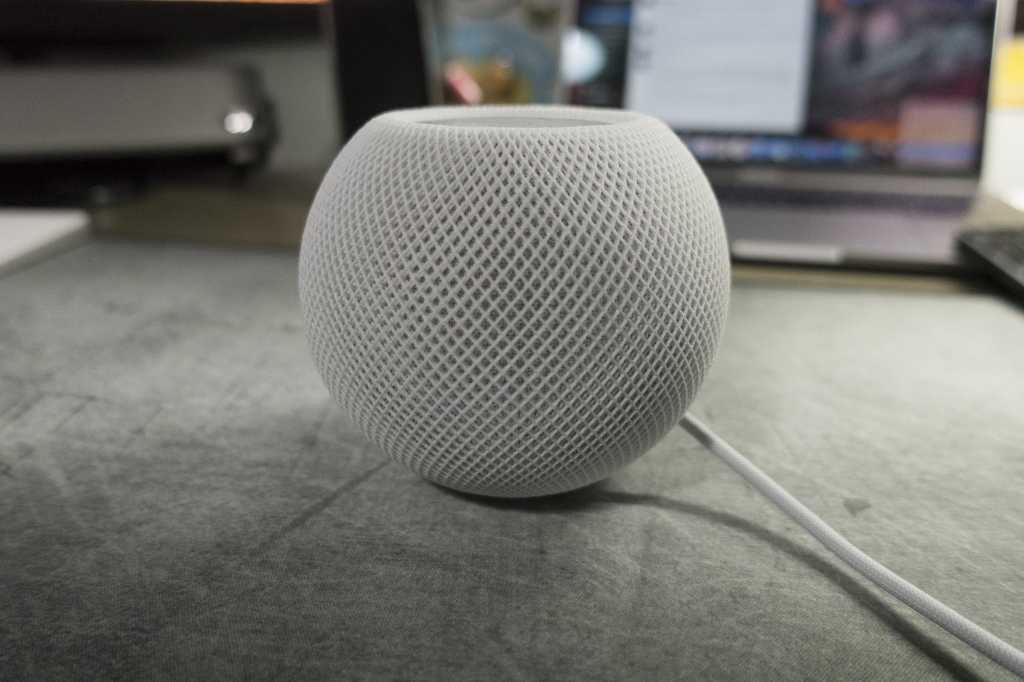 Image: Michael Simon/IDG
At a Glance

The HomePod mini is an overdue entry to Apple’s product line, but it still falls short of being an essential product.

Even if the HomePod mini didn’t have a pedigree that includes such beloved Apple products as the iPod mini and Mac mini, it still would be in a difficult spot. For one, its namesake is one of the rare misses in the Tim Cook era. For another, its size and lower price point puts it in direct competition with the ubiquitous Amazon Echo and Google Nest Audio.

While the HomePod mini is a much-needed, overdue entry to Apple’s product matrix, it’s unlikely to tempt anyone who isn’t already invested in Apple’s ecosystem. Where Apple’s other mini products were geared toward switchers put off by the high prices of those product’s respective siblings, the HomePod mini is merely the speaker Apple should have released first.

As it stands, the HomePod mini feels like a catch-up device that doesn’t bring anything new to the conversation. It looks great, and it’s so small you want to pick it up and take it with you. It sounds good but it’s blown away by the larger HomePod. It’s cheap but not as cheap as the Echo Dot and Nest Mini. Three years later, the new HomePod once again feels like a starting place.

The first thing that will hit you about the HomePod mini is, well, how mini it is. It measures just 3.5 inches around and has a smaller footprint than the newly redesigned Echo Dot (which, oddly enough, is also a sphere) and Google Nest Mini. It’s too bad it’s not a portable Bluetooth speaker because, at roughly the size of a large grapefruit, it fits nicely in my hand and feels great to hold.

It’s extremely easy to set up, provided you have an iPhone or iPad nearby, and you’ll want a subscription to Apple Music as well, at least for now. While Apple has opened up the HomePod software to work with other music services by default, only Pandora is supported for now, but Amazon Music, Spotify, and others should be on the way. When you ask it to play something, the screen at the top lights up and is very nice but you won’t be able to see it unless you’re looking directly at it. It’s also missing an easy way to turn off the microphone outside the app.

Keeping with Apple’s style, the HomePod mini has a similar aesthetic to the original HomePod, with a color screen at the top and a fabric-wrapped outer shell. Either color will look great on a shelf or counter and you’ll want to put it in a highly visible spot, though you’ll also need to devise a plan to hide the cord. Like the original HomePod, the 5-foot cord is attached and somewhat inflexible, so your placement options are limited.

Compounding things is the other end of the cord. The HomePod mini’s cord doesn’t have a plug like the original HomePod. Rather, it ships with Apple’s bulky 20W USB-C power adapter, but any 20W USB-C charger will suffice. Anything less than that (including the power banks I tried as well as a Thunderbolt 3 port on a MacBook) will render the HomePod useless with an ominous pulsing orange light at the top.

That’s a shame because the HomePod mini really wants to be portable, and not just because of its size. It’s also very light, and while a battery would easily double or triple its weight, it would still likely be less than two pounds with a five- or six-hour battery. Add a MagSafe dock for quick and easy charging and you’ve got one of the best Bluetooth speakers on the market.

It seems as though Apple is setting HomePod mini up for GoPod. One of its main features is 360‑degree audio “that sounds amazing from every angle,” which would be far more useful if you could put the HomePod mini in the middle of a room. But you’ll really only be getting 180-degree sound since your HomePod mini will almost certainly be positioned against a wall.

Even if you can magically position it in a place where people can walk around, that 360-degree sound is markedly different than the original HomePod’s spatial awareness. Where the larger HomePod “analyzes the acoustics and adjusts the sound based on its location … so the entire space is filled with rich, well-defined tones,” the smaller HomePod only promises to “sound amazing from every angle.”

That’s a hard claim to dispute, but I can tell you two things: the original HomePod sounds much better than the mini, and the HomePod mini sounds better than an Echo Dot. The biggest issue I have with the mini is bass. Where the original HomePod shakes the room with deep low-end tones that border on excessive, the HomePod mini puts a much greater emphasis on upper mid and presence ranges so songs sound more trebly than they should. That said, it’s quite loud for its size and shouldn’t struggle to fill up any but the largest of rooms.

The other reason to buy a HomePod mini is as a smart Siri-powered speaker. Like Alexa on the Echo Dot or Google Assistant on the Nest Audio, Siri is always at the ready on HomePod mini, waiting for the telltale wake phrase, “Hey, Siri.” It listens extremely well and usually perked up when I whispered from across the room, which is good because the device doesn’t provide any visual cues that it heard you aside from the top screen, which you probably won’t be able to see.

But while Siri’s smarts have gotten better in iOS 14 with features like audio handoff, intercom, and personalized daily updates, it’s still nowhere near as smart and effortless as Alexa or Google Assistant. And it’s not materially better than Siri was when the original HomePod launched, which is one of its biggest failings.

The biggest issue is the lack of smart devices to interact with it—basically, any plug, switch, light, and camera is sure to work with Alexa and Google Assistant but probably won’t support Siri. My home is equipped with dozens of smart devices and the only ones that Siri can talk to are one of my two August locks and my Hue lights. So, you won’t be able to ask Siri to change the temperature on your Nest Thermostat, or talk to the person who just rang your Ring Doorbell, or control the lamp plugged into a Kasa Smart Plug.

HomePod mini is also missing many of the things that make the Echo and Google Nest devices so compelling. It’ll tell you a story if you ask, but it doesn’t have anywhere near the library that Alexa has. It doesn’t play games other than simple things like flipping a coin. And while Shortcuts are a great way to automate things, they require way more input and know-how than Alexa’s skills.

Should you buy a HomePod mini?

Had the HomePod mini arrived before the original HomePod—as it probably should have—this would have been a very different review. But knowing how well the HomePod sounds, how cheap the Echo Dot and Nest Mini are, and how little Siri does compared to the other assistants, it’s hard to give it a better than an average grade. Apple fans will enjoy it, but it’s not going to tempt anyone to jump ship.

That said, Apple’s new speaker is a solid entry at a good price, but you should wait until the inevitable sales start hitting Best Buy and Walmart. HomePod mini does the basics very well, looks great, and sounds good enough. If you’re looking for an everyday music player, weather forecaster, simple question answerer, and light switch, it’ll work a bit better than one of the super-low-priced alternatives, especially if you’re already invested in the Apple universe.

At $99, the HomePod mini is probably cheap enough to succeed. But it probably won’t make as much noise as Apple hopes it will.