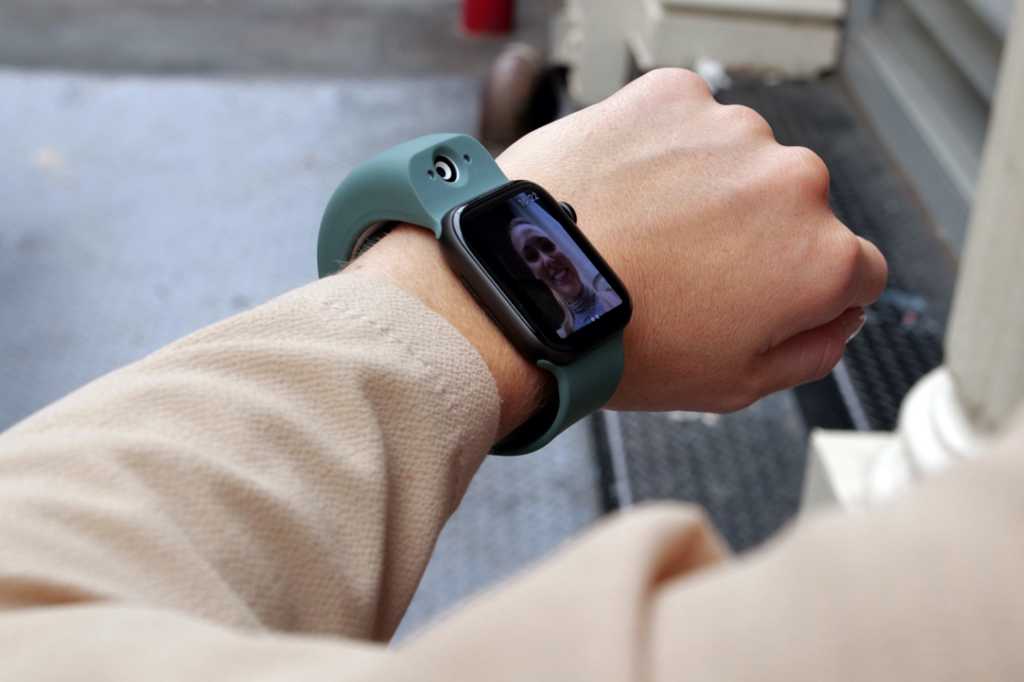 The Apple Watch can do a lot of things—count your steps, track your blood-oxygen levels, read your pulse, monitor your sleep. The team at Wristcam wants to add one more thing to that list.

As its name suggests, Wristcam brings a camera to your wrist. Or more specifically, two cameras to your Apple Watch’s band. While the Apple Watch can already control your iPhone’s camera from a distance like a viewfinder, Wristcam adds an 8MP “world-facing” and 2MP self-facing cameras with Sony sensors that can be accessed via an app and multifunctional button built right into the band.

Since Wristcam can’t tap into the Apple Watch’s hardware, it uses Bluetooth 5.0 and Wi-Fi to communicate with the app and 8GB of onboard storage to store pics and videos that can easily be offloaded to your iPhone. To make the connection, Wristcam is using its proprietary Atomic Visual Computing Engine, which “employs multi-layer networking and resource optimization to enable real-time visual processing for constrained mobile applications.” In my Zoom demo, the live images in the viewfinder were seamless.

Wristcam can also integrate with the Messages app to send pictures and short video clips or even live video to other Wristcam wearers. The dream is to one day integrate with FaceTime, but it’s unlikely that Apple will ever allow that. However, there are definite future implications for AR apps such as Pokemon Go that can operate right on your wrist, something the Wristcam team is already exploring.

It sounds like a crazy idea, and when you see the Wristcam for the first time, it looks a little crazy too. But in speaking with co-founders Matt Frischer and Ari Roisman ahead of the Wristcam’s launch last week, it became clear that they’re well aware of the concerns people could have about wearing a camera on their wrist—mainly weight, quality, and privacy—and have addressed all of them.

Made for Apple Watch

For one, the Wristcam is extremely light. It adds just 23 grams of weight to the Apple Watch, which is somehow lighter than Apple’s Sport Band, which weighs about 40 grams. I haven’t had a chance to put one on my wrist yet, but that’s a remarkable spec. Frischer said he’s been wearing his Wristcam day in and day out for weeks and barely notices the weight. However, there is the issue of bulk. The selfie cam juts above the Apple Watch screen quite a bit, so you’ll notice it when wearing long sleeves.

The photo quality appears to be a whole lot better than I originally anticipated. Roisman showed me some pictures he had taken earlier in the day, and while they obviously didn’t compare to shots taken with the iPhone 12, they were more than acceptable. The Wristcam’s cameras are capable of shooting 1080p video and “4K resolution” photos. Of course, you won’t get any of the tricks that the iPhone 12 brings such as night mode, Dolby Vision, and portrait lighting, but the picture quality isn’t bad at all, as you can see below. To my eyes, they look comparable to photos taken with the iPhone 8.

Privacy concerns are probably the biggest issue with wearing a somewhat inconspicuous camera on your wrist, but the Wristcam team has addressed that too. For one, the “world-facing” camera is very visible, especially when you’re contorting your wrist to frame a shot. But if that’s not enough, small LED lights illuminate on the band next to each camera to let people know they’re being recorded.

Wristcam was developed for Apple’s “Made for Apple Watch” program, which until now has mainly featured chargers and docks. That means it needed to be built according to Apple’s design and environmental guidelines. The band features its own inductive charger that doesn’t interfere with the Apple Watch charging puck and comes in a variety of colors, including Noir, Blanc, Gray, Rose, and Sage. Additional band colors are available for $49 in Twilight, Grape Crush, and Henna.

Wristcam is available for preorder in 38/40mm and 42/44mm options at Wristcam.com for $299. It is expected to ship in March.