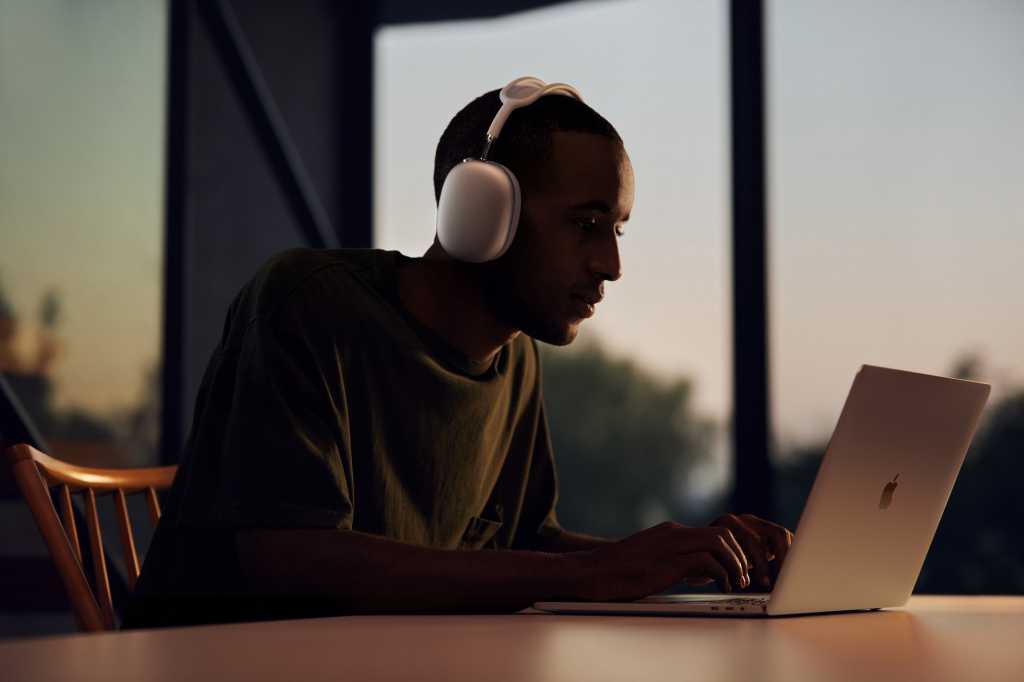 Apple today launched its first non-Beats-branded pair of over-ear headphones and they certainly look great. There’s no denying that the AirPods Max are packed with features, flush with Apple’s trademark design touches (like a stitched “L” so you know which side is which), and surely sound as good as the best wireless headphones from Sony, Bose, and  Beats.

But at $549, it’s hard to look at the AirPods Max as anything other than a missed opportunity. We knew they wouldn’t come cheap, but AirPods Max are hundreds more than their closest competitor and are arriving pretty late to the game bringing features we’ve seen and heard before. They feature the same Adaptive EQ, Active Noise Cancellation, Transparency mode, and spatial audio that’s available on the AirPods Pro, along with the H1 chip, the Apple Watch’s Digital Crown, and the iPad Air’s colors.

Along with colors comes Apple’s impeccable design, which “a breathable knit mesh canopy,” stainless steel headband, and “a revolutionary mechanism that balances and distributes ear cup pressure, and allows it to independently pivot and rotate to fit the unique contours of a user’s head.” The cups themselves are quite large but surprisingly don’t include an embossed Apple logo so they’re very clean.

They’re also quite heavy. While 13.6 ounces might not seem like much, it’s significantly heavier than the Bose Noise Canceling Headphones 700 (8.3 ounces), Sony’s WH-1000XM3 (8.99 ounces), and the Beats Studio 3 (9.2 ounces). Apple says the headband “is made to distribute weight and reduce on-head pressure,” but when you’re putting something on your head every ounce matters.

The 20-hour listening time is also good but not as long as the 30 hours offered by Sony’s WH-1000XM3 or even the 22 hours you get with the Beats Studio 3, both of which cost significantly less.

As far as the sound goes, the AirPods Max feature “a 40-mm Apple-designed dynamic driver that provides rich, deep bass, accurate mid-ranges, and crisp, clean high-frequency extension so every note can be heard.” That sounds nice and likely will sound nice, but a 40mm driver isn’t all that uncommon in high-fi headphones. For example, Sony’s high-rated WH-1000XM3 Wireless Noise-Canceling headphpnes feature 1.57-inch drivers, which convert to 39.878mm, while the Beats Studio 3 have a 50mm driver.

I have no doubt that the AirPods Max will sound amazing, but at $549, I wonder who they’re for. It’s true that audiophiles spend thousands on high-end high-fidelity headphones, but they have demands that everyday listeners don’t. For one, they generally want wired connections, something the AirPods Max don’t offer without a separate Lightning-to-3.5mm adapter for $35 that is just 1.2m (about 4 feet) long. Add a 20W plug, which also isn’t included, and you’re over $600.

You’re also not getting an equalizer to let you tweak the bass and treble to your liking. The AirPods Max has the same Adaptive EQ as the AirPods Pro that “adjust the sound to the fit and seal of the ear cushions by measuring the sound signal delivered to a user and adjusting the low and mid-frequencies in real time” but true audiophiles who would spend $549 on a pair of headphones will want to customize the sound.

The AirPods Max are also missing the U1 chip in the Apple Watch and iPhone that brings accurate location tracking and spatial awareness. But the strangest missing feature of the AirPods Max is the addition of the Digital Crown on the right cup. ( I originally thought it was there to replace hands-free Siri support, but I was wrong, it’s there.) The Digital Crown merely replaces the touch-sensitive buttons on the AirPods and Beats headphones, and it’s strange that Apple seemingly stepped backward with the addition of a button.

All of this isn’t to mention the rumors that Apple was looking to bring “leather-like fabrics” and magnetic cups that can be swapped with different colors to customize the look. That would add a uniqueness to the AirPods Max that no other headphone offers. As it stands, you can only get the AirPods Max in one color, unless you want to spend another $550 on a second pair.

The AirPods Max are very pretty and I have no doubt that they’ll sound amazing. For $549, they just seem extremely overpriced no matter who the target audience is. I doubt it’ll matter much—especially if Apple launches a lower-priced version next year—but for now the only the maxed out about the AirPods Max is what they’ll do to your credit card.

Update 12/9: The AirPods Max do support Hey Siri. Sorry for the error.