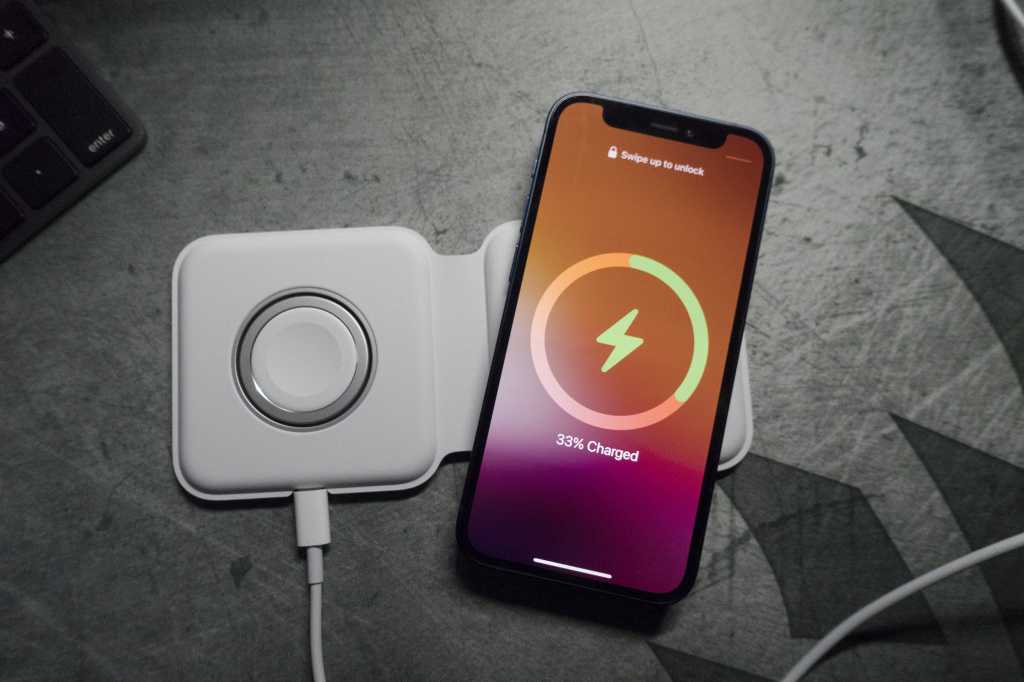 Image: Michael Simon/IDG
At a Glance

If you’re looking for a way to charge your iPhone and Apple Watch at the same time, you’re better off just putting a MagSafe Charger and an Apple Watch Charger near each other and saving $90.

The best thing I can say about the MagSafe Duo charger is that it does what it’s supported to do: charge your iPhone 12 and Apple Watch at the same time. But if you’re looking for a revolutionary MagSafe charging experience—or quite frankly, even a good one—you should probably wait for something better and cheaper to come along.

At $129, you should expect the MagSafe Duo to bring a level of charging akin to the fabled AirPower charger, which promised a new charging solution that, according to Phil Schiller, would “actually help the entire industry move forward.” The MagSafe Duo doesn’t do that. If anything, it’s a step backwards.

The MagSafe Duo charger is very pocketable and clearly made with travel in mind, but it doesn’t feel like it’ll hold up to the abuse of tossing it in a bag or a pocket on a regular basis. And even if it does it’s going to get extremely dirty. It has a bit of weight to it, so it’ll probably find its way to the bottom of a bag, and since it only comes in white, you’re going to see every inevitable scratch and mark it picks up.

Scuffs and scrapes aside, the “hinge” on the Duo is made of what feels like rubber, and I’m not convinced that it won’t crack and tear over time. I’ve only opened it a few dozen times, and already it has a very prominent crease on the inside. For the price, it doesn’t look or feel very premium, so I can’t image wear and tear will be kind to it.

Despite its versatile appearance, the MagSafe Duo is actually fairly basic. You can open it to charge your iPhone (or any other Qi-enabled device) and Appel Watch, or flip it around on itself to charge one thing at a time. When closed, you can’t charge anything, which feels like a missed opportunity.

The magnets on the MagSafe Duo are quite strong, which is good for keeping your phone in place, but not so good for using it as a stationary desk charger. Like the MagSafe charging puck, you’ll need to physically pry the charger from your phone to remove it and the floppy hinge doesn’t lend itself to propping the iPhone up like a stand.

The watch side is a little more versatile in that you can either lay your watch flat, which might be tricky depending on which strap you have, or prop it up. It’s slightly easier to remove than the phone side, so it’s more conducive to using on a desk or a nightstand. I don’t know why Apple didn’t give the iPhone side the same ability to function a flip-up charger as well.

Unlike AirPower’s promise, you need to put each device on its specific side to charge, and speeds will vary based on the charger you use. Like the iPhone, the MagSafe Duo charger comes with a Lightning-to-USB-C cable but no power adapter, so you’ll need to bring your own. However, if you use the same 20W charger ($19) that Apple recommends for the iPhone 12’s charging needs, you’ll only get around 11W charging, while a 29W charger ($49) will give you 14W charging. Except if you use Apple’s older 29W USB-C charger, which the company says won’t work at all. Here’s how Apple breaks it all down:

Even if you can get the top speeds, however, it’s actually less than the 15W MagSafe charging speeds you’ll get with using the regular MagSafe charger. In my testing, I got sustained charging speeds of around 10W on the iPhone 12 mini and 12W on the iPhone 12 no matter which power adapter I used, so the MagSafe Duo charger obviously won’t be great for speedy fill-ups.

The MagSafe Duo charger won’t charge as fast as the regular MagSafe charger or a wired connection, is too magnetic to work as a desk charger, doesn’t prop up your phone so you can see what’s on the screen, is kinda flimsy, and doesn’t work unless it’s opened. That laundry list of complaints would make a $49 charger a tough sell, but at $129, it’s nearly impossible to recommend.