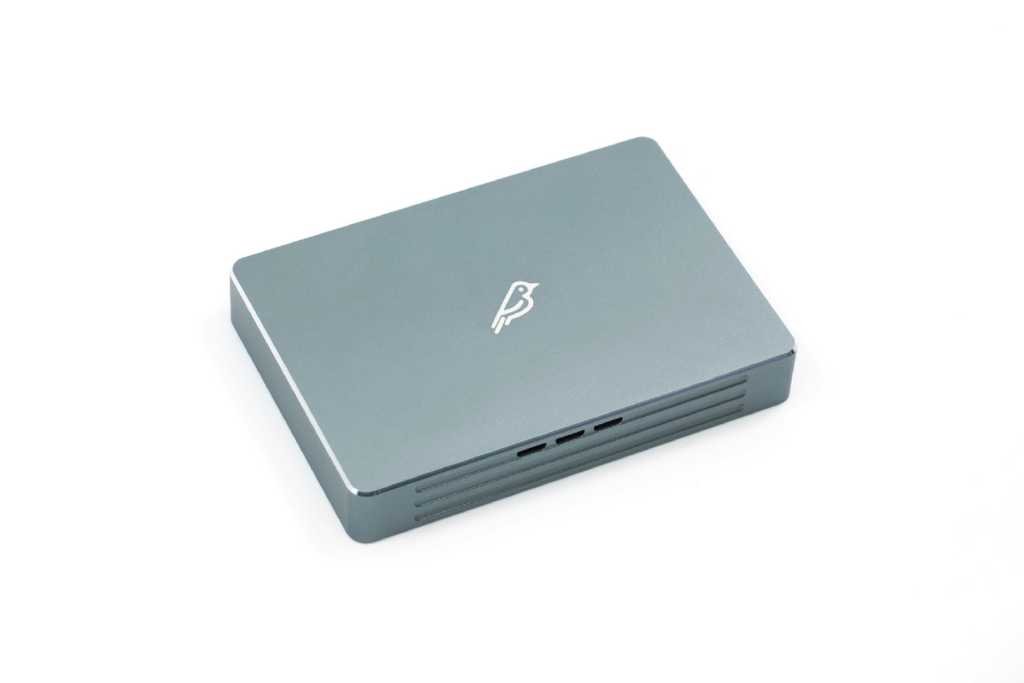 You can put any SSD in any capacity you wish in the Fledging Shell Thunderbolt. It has a large form factor, an honest-to-goodness fan, and plenty of venting to circulate extra air and keep the drive cool.

Fledging has redesigned its Shell Thunderbolt SSD to excellent effect. With a new larger form factor, an honest-to-goodness fan, plus plenty of venting to circulate the extra air, it no longer feels startlingly hot to the touch after heavy use. Running cool means no thermal throttling and consistent 2GBps plus speeds. The Shell Thunderbolt is also cheaper than Samsung’s popular X5 once you reach 1TB of capacity.

The Fledging Shell Thunderbolt is all-metal and colored in approximately the same hue as your average late model Mac. It measures approximately 3.75-inches long, by 2.5-inches wide, by just over 0.5-inches thick, and weighs a few ounces. I personally like the feel and heft—if you want something flimsy and plastic-y, look elsewhere.

You access the motherboard and M.2 NVMe slot by removing four small Philips screws and the bottom plate. Fledging thoughtfully provides a screwdriver for this—a normal size household unit won’t fit the rather small indents. One screw is used to secure the SSD in place.

With the bottom open, you’ll see the aforementioned fan, which was present in the far slower Fledging Shell USB drive, but missing in the original Thunderbolt model—it was a bit of a puzzler, as Thunderbolt allows faster performance, and therefore produces a lot more heat. The new shell is also larger, which means more air for cooling, and there is plenty of venting so the air can circulate.

You can put any SSD in any capacity you wish in the Fledging Shell Thunderbolt. I tried two. Fledging provided a 256GB WD SN750, but that wasn’t capacious enough to allow full write speed. I went with a 1TB Aura P12 for no other reason than it was at the top of my stack of review units. Numbers were just about as high as you’ll see over Thunderbolt 3: 2838MBps reading and almost 2394MBps writing on sister pub PCWorld’s testbed under CrystalDiskMark 6.

BlackMagicDesign’s Disk Speed didn’t reach quite those heights when running on a 2019 MacBook Pro, but speeds were still well over 2GBps. Nice and on par with the Samsung X5.

Thanks to the fan and the other thermal measures, the new Fledging Shell Thunderbolt runs almost cool to the touch, Fledging claims 30 degrees Celsius (85 degrees Fahrenheit), which was only a little over the ambient temperature in the testbed. As noted, the older, smaller non-fan was uncomfortable to the touch after heavy use.

Comparatively, OWC’s $80 Envoy Express is somewhat slothful, writing at around 1250MBps and reading at 1350MBps. Not bad, but not close to the Shell. The Express might still be the better product if you’re leveraging an older, slower NVMe SSD (e.g., x2 PCIe) that can’t take advantage of the Shell’s greater bandwidth. Under any other scenario, the Shell’s the one to go with.

The Fledging Shell Thunderbolt costs a cool (pun intended) $145 without an NVMe SSD. With mid-range 500GB NVMe SSDs starting around $70 and Samsung’s 500GB X5 is $199 on Amazon, the Shell doesn’t make sense at lower capacities.