This week’s roundup includes two new apps that let you broadcast live video straight from your phone. Plus, we have a new “Star Wars” game. And we know you love those.

Need a little incentive to get off your butt? The free Atari Fit app for iPhone offers more than 100 exercises, so you’ll have a useful guide to getting in shape — and if you actually do the exercises, you can earn “coins” that unlock classic games like Pong, Super Breakout, and Centipede.

The $3 Carrot Weather app for iPhone and iPad presents your forecast and current conditions with a punchline. The makers say, “You’ll actually be looking forward to a blizzard just to see what CARROT has in store for you!” Which isn’t true, but we still enjoy a good joke now and then.

The $4 Enlight for iPhone bills itself as “one powerful, beautifully designed photo editor.” Features include analog and duo filters, black-and-white photo capabilities, paint and drawing effects, as well as an array of photo correction and cropping tools.

Fradio is one of a new generation of “create your own media” apps that have become more prominent in recent weeks. Most are video-based—we’ll get to that in the next few slides—but this free iPhone app basically lets you create your own live radio show, complete with callers and the ability to play the songs of your choice. A $10-a-month subscription makes the experience ad-free.

A couple of weeks ago, we told you about Meerkat, an app that lets users stream live video through their Twitter feeds. Competitors are now arriving. Periscope, in fact, is owned by Twitter itself—but it has pretty much the same easy, intuitive handling that its predecessor does. One big difference: Periscope makes the video available as a replay on its network for up to 24 hours, whereas Meerkat videos disappear just as soon as the live feed is over.

Looks like the franchise might be in good hands with Disney. Star Wars Rebels: Recon Missions is a spinoff game of the new animated series that takes place in the years just before “A New Hope.” This is a freemium game with plenty to do, with 30 levels of challenges immersing you in George Lucas’ universe.

Here’s another Meerkat competitor: Stre.am is slightly more versatile than the older app, letting you alert friends through Facebook and Google Plus to your live feeds, not just Twitter. It also produces a seemingly sharper live picture than other similar apps. The race is now on to see which live video app will come out on top.

Is this Uber for UPS? Roadie’s makers explain: “Roadies get paid for driving to the places they’re going anyway. Senders post Gigs with details and pictures of their items and drivers choose the ones they like based on location, price, sender ratings and reviews. No bidding or bartering.” iOS is even transforming package shipping. What next?

Launcher (pictured) has been restored to the App Store after a hiatus … Facebook Messenger lets users send each other money … VaporChat lets you delete photos and texts you’ve sent to somebody else’s phone from their phone. 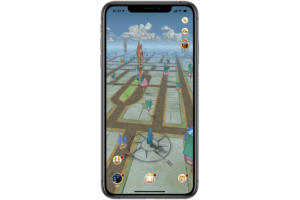