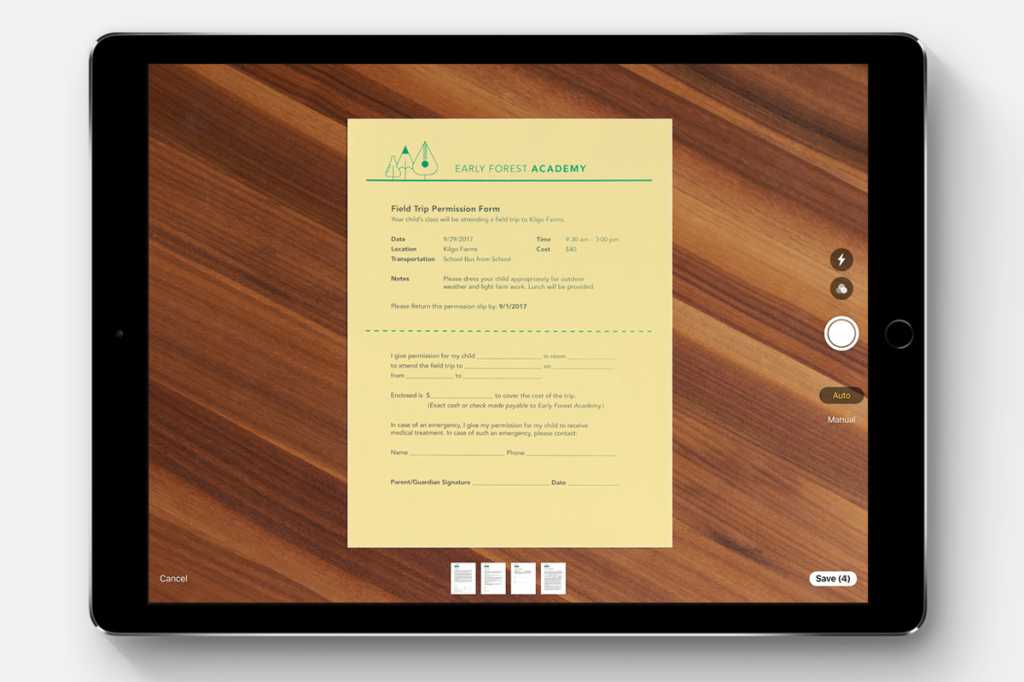 Is there a more versatile iOS app than Notes? It was one of the original iPhone apps, and with every update to iOS it’s become a more capable receptacle for our text, images, checklists, and just about anything else you can think of. iOS 11, unsurprisingly, continues the trend, with some great new additions that take advantage of the iPhone camera and the Apple Pencil.

For a while now, there have been many iOS apps that will use your camera to “scan” paper documents. They work surprisingly well—you may never need to use a document or flatbed scanner again—but of course, you have to know they exist and then go buy one of them from the app store. With iOS 11, Apple’s adding basic document-scanning functionality to Notes.

To scan a document, you enter a note and tap the plus button at the bottom of the screen (or just above the keyboard), then choose Scan Documents. You’ll be presented with a camera view and prompted to position a document within view of the camera. Notes will then try to detect the edges of your document, and you can tap to capture the document or wait a few seconds and the app will take the shot for you. Behind the scenes, the app is using the edges of the document to remove any hint of perspective, so the end result looks as flat as a piece of paper. (You can also edit the automatic crop points if you think the final document appears too skewed.)

You can scan multiple pages within a single document, so if you’ve got a five-page document you need to scan, you can scan each page. When you’re done, tap Save to save the document into a Note. From there you can tap to open the document at full size, save it out as a PDF, share it with someone, or use iOS’s Markup feature to annotate it. Yes, this means that you can now scan a document, sign it (with your finger via Markup) and then share the resulting signed PDF. That’s pretty great.

I didn’t find Apple’s edge-detection features to be quite as good as those in third-party scanning apps, but it was perfectly functional. I was, however, disappointed that Notes doesn’t offer any optical-character recognition features like the third-party apps. This means that your scanned documents aren’t searchable. It’s awfully nice to be able to find text within a scanned document, but Apple has chosen not to support that.

Notes is a great app, but not everybody uses it—and the document-scanning feature is hidden behind that plus button. I’m surprised Apple hasn’t built document scanning directly into the Camera app itself. It would surely be easier to find.

New Notes features for the iPad Pro and Apple Pencil

Most of the other big new features of Notes are focused on users of the iPad Pro and Apple Pencil. The best one is called Instant Notes, which lets you immediately start hand-writing a note on your iPad screen when you touch the Apple Pencil to it while on the lock screen. If you’re sitting in a class or a meeting and you need to jot something down, there’s no longer any need to unlock your iPad and launch the right app. Instead, a new note is created and you’re immediately writing inside it. (Because your iPad is locked, you just have access to this one sheet—you have to unlock the iPad to get full access.)

As much as I like this feature, I’m disappointed that every time you come back to it, you have to start on a new page. From a security perspective that makes sense, but from a practical perspective it might be better to let the most recent Instant Notes item remain accessible for a while longer, at least as an option.

Another new Pencil-focused feature is Instant Markup, which eliminates having to jump into Markup mode when you’re trying to write on a PDF or screen shot with the Apple Pencil. For certain file types, beginning to mark on a document with Apple Pencil jumps straight to Markup, saving a step. It makes sense.

iOS 11 also introduces inline drawing in Notes and Mail, so you can take a normal text-bearing document and just start writing below it, and that writing will be included in the existing text document.

Finally, while Notes doesn’t use OCR on scanned documents, it does perform handwriting recognition. That means that you can search for text in your handwritten documents. This feature’s been available on note-taking apps for a long time, but it’s never been available within the core of iOS before, and it’s a welcome one. Notes will even try to use the first line you write as the title of that note, for the purposes of displaying it in the list of notes. (You can edit it later if your handwriting is as bad as mine.)