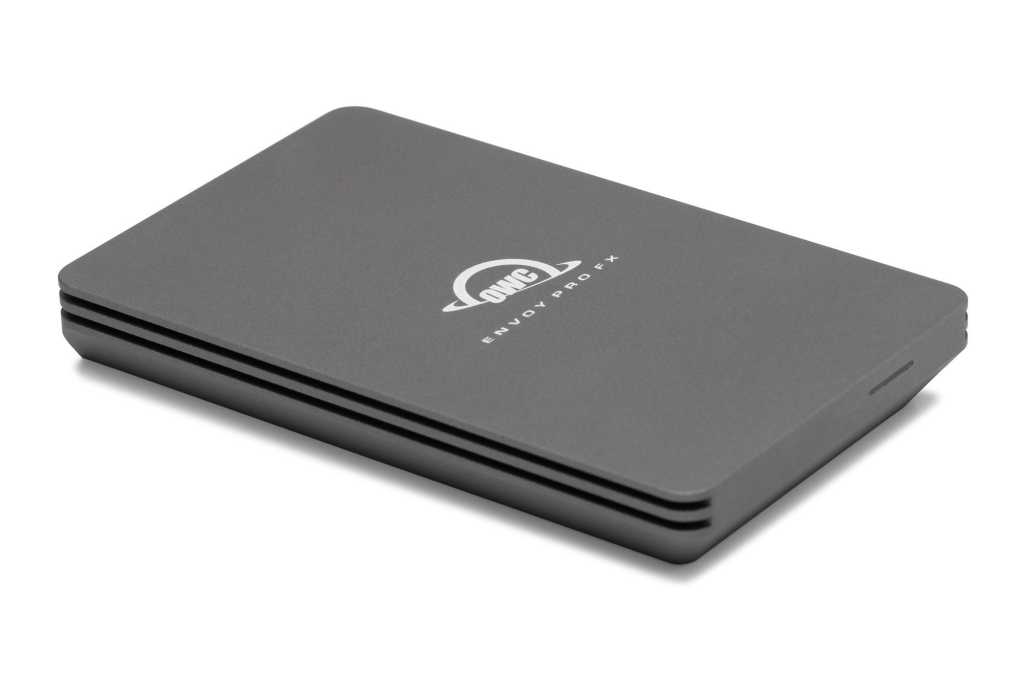 This drive reads and writes at 2GBps via Thunderbolt 3 and 1GBps via Gen 2 (10Gbps) USB. This allows for speedy transfers with Macs and Windows machines. It’s also nice looking with a good heft to it. Both types of cables are included.

Eventually, USB 4 should render the distinction between Thunderbolt and USB largely moot. That’s the hope at any rate. For now, if you want the scintillating performance of Thunderbolt 3 when it’s available, and the compatibility of USB when it’s not, you need a drive such as OWC’s Envoy Pro FX.

The all-metal Envoy Pro FX  is a handsome, all-metal, slate gray enclosure that quite nicely matches late-gen Macs style-wise. At approximately 4.5-inches long, 2.75-inches wide, 0.6-inches thick, and 8.6 ounces it’s a bit on the large and heavy side, with more the appearance of an external 2.5-inch hard drive than SSD.

I consider the heft smooth metal surface tactilely pleasing. Non-skid runners on the bottom keep it stable on the table, and the mass of metal distributes heat nicely—the Envoy Pro FX was barely warm to the touch under heavy use.

One end of the drive is home to a obviously labeled Type-C port (sporting the Thunderbolt logo and “USB 3.2 10Gbps”). That assures that if you hand the drive to someone, there will be no doubt that they will know that it works with either bus. The other end features the status LED in the form of a small thin bar.

The drive, in case the Type-C port isn’t a clue enough, is Thunderbolt 3. There’s no AC jack so you can’t use it on older Macs via Thunderbolt without an AC-powered dock.

The Envoy Pro FX uses an NVMe OWC Aura Pro internally and is available in 240GB, 480GB, 1TB, and 2TB capacities for $179, $229, $319, and $499 respectively. (Note that sustained write performance with larger files often drops significantly with lower capacity drives.) OWC includes both a Thunderbolt 3 cable and USB Type-C to Type-C cable with a captive Type-C to Type-A adapter.

The drive ships with helper software installed on an 8GB partition. The software will help you format the main partition to the file system of your choice, or you can do that yourself using Apple’s Disk Utility. You might want to copy the software to your main drive so you can delete the helper partition and use the full capacity. That’s what I do. Your call.

Though OWC doesn’t go into it on the Envoy Pro FX’s web page, USB Gen 2 10Gbps performance is about half the advertised 2GBps you’ll see over Thunderbolt 3. Those are the numbers you’ll see from synthetic benchmarks such as Blackmagicdesign’s Disk Speed Test and  CrystalDiskMark 6 which we ran on sister publication PCWorld’s test bed to corroborate results.

Real life performance from the 2TB drive we tested during long transfers was around 650MBps via USB 10Gbps and 1.25GBps over Thunderbolt.

Blackmagidesign’s Disk Speed Test had nice things to say about both the Envoy Pro FX’s Thunderbolt 3 performance (above), and it’s USB 10Gbps performance (shown below).

By the way: the USB Forum now refers to Gen 2 as SuperSpeed USB 10Gbps. For brevity’s sake, we refer to it as USB 10Gbps. Also note, that Type-C is purely a type of connector. The USB forum likes to refer to it as USB-C or USB Type-C which helps with their branding, but tends to confuse buyers and apparently the marketing staff of some vendors.

As you can see above, CrystalDiskMark 6—a Windows benchmark popular with vendors—had nice things to say about the Envoy Pro FX’s performance. Our real world 48GB transfers also say the drive is a hair faster than Samsung’s X5, though the difference was well within statistical variance.

The Envoy Pro FX lacks for nothing on the performance end. It even did well on our 450GB write test, shown below, which we perform to see if transfer rates drop if an when a drive runs out of NAND to use as secondary cache (writing 1-bit per cell rather than 3).

Note that the X5 was a 1TB drive, and the Sabrent a whopping 8TB unit, giving the latter a huge amount of the aforementioned secondary cache to play with. Smaller capacities may not perform as well due to less NAND available for use in that role. That’s true of nearly all SSDs, not just OWC’s.

On a side note, I tested the Envoy Pro FX on both an M1 Mac mini (results shown), and a slightly older Intel iMac. If there are still any issues with USB drives being slower on the M1 or Big Sur, they didn’t show up. In fact, the M1 transfers were anywhere from 10 to 20 percent faster.

The Envoy Pro FX is as fast as Samsung’s X5, but trumps it with seamless support for 10Gbps USB, a lower price tag, and cooler operation. And just to be clear, it will work on any computer running any OS via one transport protocol or the other. The best of all worlds, you might say.